A Brave New World & The War on Women.

We have seen examples of different forms of social conditioning in our world history.

We have to wonder how an entire society is brain washed into genocide. The Holocaust was the systematic, bureaucratic, state-sponsored persecution and murder of millions of Jews (United States Holocaust Memorial Museum). The process of fertilization is the society’s greatest instrument of social stability.

The time is the future, in the “year of stability, A.F. 632.” Imagine a society of working ants, and you will understand Aldous Huxley’s dooming foretelling portrait of a modern civilization in A Bravel New World—the story about a civilization in conflict with nature. Society can prevail over the individual by controlling our fears. Stability is the primal and ultimate need of civilization.

Huxley’s idea of civilization is not farfetched. Mitt Romney pledges to:

Whether or not you agree with abortion, it’s a medical issue, not a political or religious one.

In these tough economical times, Congress should be helping to provide affordable health care to everyone. Not imposing restrictions on women’s rights.

Politicians should not be involved in a woman’s personal medical decisions about her pregnancy. Ultimately, decisions about whether to choose adoption, end a pregnancy, or raise a child must be left to a woman, her family and her faith, with the counsel of her doctor. ~ Cecile Richards, President of Planned Parenthood

As the nations leading sexual and reproductive health provider and advocated Planned Parenthood knows all too well that women still face gender discrimination in this country. We oppose sex selection abortion. But this bill does nothing to advance protections against discrimination and will instead have the result of further shaming and stigmatizing the woman. The bill would limit women’s health care and criminalize doctors for conducting undiscriminating heath care.

Similarly, the members of Huxley’s civilization—denied family and affection, and bred in a scientific laboratory—remained all of their lives unable to love. Family and intimacy is the cause of human dysfunction, or if nothing else, a distraction from the individual’s loyalty to the state.

The society steadfastly practices predestination and social conditioning at decantation, or birth by a modern fertilizing process, and genetic engineering. The preserved ovary travels down the fertilization assembly line … on through an opening in the wall to the “Social Predestination Room.” Sixty percent of the female embryos are sterilized so that the entire female sex is nearly infertile; and the government controls the population size and re-production.

To the society, fertility is merely a “nuisance.” The entire race is predestined and pre-conditioned…and all of the “future sewage workers or future Directors of Hatcheries.” Oxygen deprived embryos arrest the development of the adult and the lower the caste the shorter the oxygen—first affecting the brain, and then skeleton.

The Director of Hatcheries declared, “All conditioning aims at making people like their inescapable social destiny.” The society is not interested in the individual. Tactics of hypnosis, terror and electric shock in conditioning the infants before they grow into adult members of society, parents are considered “unpleasant historical facts.” In the words of the Controller of the society:

“Not so much like drops of water, though water, it is true, can wear holes in the hardest granite; rather, drops of liquid sealing wax…till at last the child’s mind is these suggestions…the adult’s mind too—all his life long. The mind that judges and desires and decides—made up of these suggestions. But all these suggestions are our suggestions!”

According to the members of its society, “every one belongs to every one else.” A favorite maxim of the civilized person is: “When the individual feels, the community reels.” The people are programmed to think and behave in a certain way before they reach maturation.

Lenina, the Beta female, attested with conviction that she is glad to not be an Epsilon or Gamma, the lower of the castes, beneath the Alpha males and the Beta females. Bernard, a specialist in his society on hypnopaedia, retorted: “And if you were an Epsilon…your conditioning would have made you no less thankful that you weren’t a Beta or an Alpha.”

In the modern civilization there is no family, marriage, or sacredness, but service to the state. The individual is replaced by the machine of society. The civilized person is preserved from disease, “internal secretions artificially balanced at a youthful equilibrium,” blood transfusions, and other stimulants, endowing the individual with unencumbered youth until almost sixty years of age, until the person inexplicably drops dead. Haven’t they used his pleasant vices as an instrument to degrade him? The civilized person became like herded cattle to the slaughter.

Whether ‘tis better in the mind to suffer the slings and arrows of outrageous fortune, or to take arms against a sea of trouble and by opposing end them… The civilized person believes that he or she is free, but the civilized person is conducted by arbitrary rules determined by a few select, self-serving leaders. The American poet e. e. cummings once wrote:

To be nobody but yourself in a world which is doing its best, night and day, to make you everybody else means to fight the hardest battle which any human being can fight; and never stop fighting.

Mitt Romney wants to restrict women’s rights by controlling fertility, birth, reproduction, population size, and criminalizing doctors that provide non-judgmental health care, but the government should have no role in a woman’s vagina… important decisions about fertility and birth should be in the hands of the doctors and their patients.

Fight for women’s rights by supporting Planned Parenthood to preserve the integrity of our humanity. 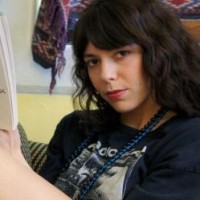 Sara Jean Deegan lives in southern California. When she’s not practicing or teaching yoga, she can be found writing poems or playing her guitar, and her vegan tiger striped… Read full bio