Will Western Women Really Save the World? ~ D. Fisher 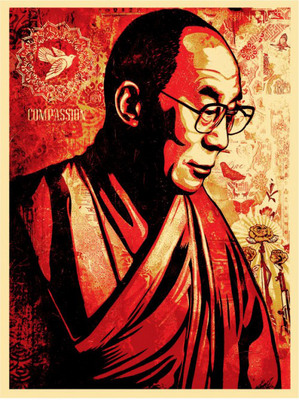 A Question to the Dalai Lama

I’m about to say something that could likely garner some backlash, but I feel it needs to be said and thought deeply about, so I’m saying it nonetheless.

To be blunt, I somewhat wish the Dalai Lama had never made his famous proclamation at the Vancouver Peace Summit in 2009, that “The world will be saved by the Western woman.”

There is perhaps no statement that has been more widely quoted and circulated in women’s empowerment and spiritual circles over the last three years. This statement has been used to galvanize a sense of excitement, and I have some major concerns about it.

With all the good intentions that this quote has been used for, I feel that at best this statement misses the point, and at worse, it has fed an over-inflated sense of self-importance in Western women.

It has taken us further away from being able to be the greatest service to the larger world.

I should first say that I do believe that women potentially have a very significant role to play as leaders in the next 20-50 years, including Western women. With that said, there are amazing women leaders all over the globe and I personally don’t think Western women are necessarily ahead of the curve. It really depends on what stick you are measuring with.

There are women like Mukhtar Mai (pictured above), a Pakistani woman who was sentenced to public gang rape by the tribal elders in her rural community. Rather than commit suicide (what women in her society are expected to do after rape), she turned her experience into a voracious fight for women’s rights.

Against all odds, Mukhtar eventually started the MukhtarMai Women’s Organization to help support and educate Pakistani women and girls. She now runs three schools where around 1,000 children from the poorest areas can get an education. Areas that most Western aid organizations had largely neglected because they were “off the map” so to speak.

Another non-Western woman making a positive impact is Somaly Mam, a Cambodian orphan who was kidnapped and sold into a brothel at the age of 12 during the time of the Khmer Rouge. For years she was raped, caged and beaten daily, even forced to watch her best friend be viciously murdered in front of her, before finally escaping. Starting in poverty and with little formal education, Somaly eventually founded AFESIP in Cambodia, which offers one of the most comprehensive rehabilitation and re-integration programs for Cambodian girls rescued from sex trade.

Somaly is also the forerunner for the fight against sex-trafficking in South East Asia and abroad. She has arguably done more when it comes to bringing issues of sex-trafficking to light on a global scale than any other individual. The Somaly Mam Foundation, located in New York, was founded in her honor.

It is of course worth noting that there are some great examples of Western women and organizations who have also made very significant contributions to supporting communities in need around the world. One example is Gretchen Steidle Wallace who founded Global Grassroots Conscious Social Change, and has been supporting women throughout post-war Africa with amazing holistic programs and services. Gretchen’s organization promotes healing, education and leadership initiatives for women and men within their communities.

My friend Gail Hochachka and her husband Michael Simpson also do amazing work through their organization One Sky: Canadian Institute of Sustainable Living. One Sky implements programs in developing countries to deal with difficult issues like climate change, rainforest conservation, governance, HIV/AIDS, widow’s rights and youth empowerment in the context of leadership and development.

However, I would argue that the success of projects pioneered by women like Gretchen and Gail are precisely due to the fact that they have supported the emergence of leadership within the communities of the cultures that they work within—not because they went into these communities trying to save anyone. They listen to the needs of the communities and respond accordingly. They look for local leaders and offer resources to bring out their own natural leadership capacities to help them address the most pressing issues in their communities.

Sheryl WuDunn’s book, co-authored with her husband Nicholas D. Kristof,  Half the Sky: Turning the Oppression of Women into Opportunity Worldwide, makes a great point—millions of dollars in aid have been wasted on certain projects that the West has implemented in developing countries. These projects ultimately failed because the people implementing the initiatives didn’t have a strong sense of what was really needed in the culture or community itself. These situations sometimes created more problems than solutions in their attempts to “save” others.

While recognizing that Western aid efforts from the outside can and definitely do offer important support, Sheryl and Nicholas remain quite passionate activists in regards to wanting to highlight the importance of integrating the support from the outside with leadership initiatives that are nurtured at the grassroots level within each community. It is the women and men at the grassroots level that are going to understand and be sensitive to the needs of their community, and thus create sustainable long-term change.

Sheryl also found that there are many amazing leaders within these communities themselves, in every culture across the planet, but they are often just not as visible to “Western eyes.” This is why our humility and ability to listen is so crucial for any Western woman who is inspired by the Dali Lama’s sentiments and truly wants to make a difference in the world, I include myself in that.

We need to be attentive to the ways we can sometimes bulldoze in with good intentions and unconscious assumptions that we know what is best, or with the belief that we have some divine ordination to save others.

I would offer that a simple re-frame of the Dalai Lama’s proclamation might be helpful here. Perhaps instead of trying to “save the world” we might instead reign in and cultivate our capacity to deeply listen to the world, so that we can support the natural intelligence and leadership that already exists within communities. If we could listen, we could become facilitators for the organic emergence of that leadership around the globe. Then, I do believe that our wealth, freedom and access as well as the unique knowledge and wisdom we have obtained from our experience of living in the West could be best utilized and offered. It would allow us as Western women to really join efforts across continents, cultures and genders, to be of most service to others.

Our contribution would become increasingly significant in the sense that it would become beautifully woven into an interdependent web of unique contributions that are being made with thousands of others all around the world.