Facing the Ego: A Straight Look at Renunciation.

I’d like to tell you a beautiful Chinese story that shows how renunciation works.

There was once a bellmaker who wanted to make the most splendid-sounding bell so that everybody would know that he had made the finest bell in the world. But every time he started, something terrible would happen—the metal would crack, a stone would roll into the mixture, and once a little animal even jumped into the pot. No matter how hard he tried, his bells were never perfect. He was so obsessed with the idea of being a great man who made the most fantastic bell that his wife deserted him, and he eventually ran out of money. Alone and poor, he was forced to give up and do something else just to make a living. One day when he was much older (and the power of his ego had worn down), he noticed some little village children playing outside his window. He felt inspired to gather together his old scraps of metal and make a row of tiny bells for each of them, tuning each set of bells slightly differently. The children were delighted. Soon people were coming from far and wide asking, “Who made these bells? These are the sweetest, most melodic sounds we’ve ever heard.”

This story applies to all of us: the moment we want to be the famous bellmaker—or saint or yogi—we will not succeed. When we want to do something for the love of God or to attain cosmic consciousness, it doesn’t matter if anybody else knows.

What needs to be renounced is the control of the ego. Whenever we want to be famous or powerful, to be in a leading position or to control other people, whenever we are possessive or driven by compelling forces, that is the ego and its desires. As you do spiritual practice, you will come face to face with the ego, and it will fight back fiercely. You may have to resort to prayer to ask for the strength and courage needed to be honest with yourself.

I noticed in my early life as a swami that I was developing the subtle thought, “I’m the sanyasi and you’re the worldly people.” So, I took off my orange robe and started to wear ordinary clothes. I didn’t want to advertise myself. If you start to observe that you chant better when someone else is in the meditation room—stop, leave, come back and chant alone. The game we play with ourselves, sometimes unconsciously, is wanting to impress an audience, in this case with our great spirituality, it happens in every corner of daily life too— “Look what a good cook I am!” “Look how many leaves I’ve raked compared to the others!”

Possessiveness is another area to investigate. Possessiveness means you are also possessed, whether by material things or by ideas—because the mental and material levels are not entirely separate. We cannot renounce something material unless we renounce it in the mind first. And we may have pockets of possessiveness that we’re unaware of. If we are possessive of a person—husband, wife, children, friends—we prevent the other person from being what he or she ought to be—himself or herself. And this is not love. It is then much better to openly admit, “I have a need, which at the moment I am incapable of renouncing. To be honest, I need you.” It is then up to the other person to decide whether or not to fulfill your needs, but at least you are not misleading them.

If you have deep feelings for a person, ask yourself how possessive you are. How many “becauses” do you attach to your love of that person? “I love you…because you get a lot of work done…because you help me…because you give me emotional satisfaction.” At least reverse the “because” to something positive: “I love you…because of your sincerity…because of what we have in common…” rather than seeing what you can get out of them. This is especially important for anyone aspiring to be a spiritual teacher. Otherwise, you use people.

Love grows in the sunlight of renunciation best because it is unhampered, unhindered. In all paths of life. If we want to have harmonious relationships with others, we have to renounce possessiveness and jealousy and preserve our energy for whatever it is we really want to do. So renunciation is necessary. If you really love, you will have to renounce self-gratification and emotional security. Sometimes it may mean even renouncing companionship because you understand that you may not have that much to give to another person. You may be attached only to an appearance of a relationship.

We also have to renounce our fantasies because they are self-created, and if you have a powerful mind those fantasies can manifest later when you no longer want them. Instead of fantasizing, clarify. Face yourself and look at your needs. As long as you have needs, acknowledge them and find different ways to satisfy them that will not be harmful to yourself or dishonest to anyone else.

False modesty, false humility, false pride, self-pity—these are all dangerous games that need to recognized and let go of. Trace them to their very roots, to the particular personality aspect that generates them. If you are compelled by jealousy, trace it back to the root of inferiority. Deal with that feeling, bring it to awareness. Do the same for any behavior or emotion that seems beyond your control. The power is neutral. And the power that now keeps you bound can be redirected to something more beneficial, to your higher self. You can change stubbornness, which can be a real stumbling block on the spiritual path, into willpower, which can help support you in any creative endeavor.

Yoga is a path of liberation. You cannot force renunciation, but you can be determined to be liberated from anything that keeps you prisoner. When you kindle and nourish the desire to be free, you redirect the power from the greed of the compulsion and give energy to your personal path of liberation. ॐ

Swami Sivananda Radha (1911-1995) was a pioneering force in bringing the ancient wisdom of yoga to the West. Initiated in 1956 by her guru, Swami Sivananda of Rishikesh, India, she went on to establish Yasodhara Ashram in British Columbia, Canada, and author classic books on yoga including Kundalini Yoga for the West and Hatha Yoga: The Hidden Language.

Swami Radha was among the first Westerners and first women to bring yoga to the West. In 1955 after having a powerful visionary experience of her guru, she left everything and traveled to India to meet Swami Sivananda. In February 1956, she was initiated into sanyas, a commitment to a life of selfless service and renunciation, and was asked to return to Canada to start an ashram and many centres of Light.

Swami Radha was 44 when she went to India, and spent the remaining forty years of her life passionately committed to the teachings. During this time she founded Yasodhara Ashram and the Radha Yoga Centers, as well as Timeless, which has published her ten books on yoga. In 1969 she founded ascent magazine, which blossomed into an international yoga magazine. The Ashram, now in its 50th year, and the Radha Yoga Centers continue to present her work in the spirit in which it was given, maintaining the quality and integrity that were the essence of Swami Radha’s life. 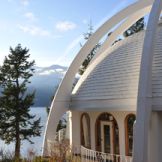 Yasodhara Ashram is a vibrant spiritual community where people of all ages live and work together to expand their awareness and bring the teachings of yoga to life. Establishe… Read full bio