How to succeed when you aren’t a superhero, a rockstar or a guru.

What if Wonder Woman’s crown is too small for an ordinary mortal?

What if thinking you should be a superhero or a rock star or a guru is actually cramping your style, keeping you small?

What if trying to do it all is ruining (harsh word, and it may be true) your biz?

It’s worth thinking about.

It all began with a daily ritual (this is important later).

Lately, I’ve been steadfast in a daily ritual: meditation, focusing and prayer. When I focus, I drop inside and let my body show me what’s cooking underneath my regular awareness. It’s like a check-in, only more complete. Today, what showed up was pressure around my brow with the associated image of a too-tight Wonder Woman’s crown.

A super hero’s crown too tight? That was weird. But I sat with it and here’s what I got.

You’re actually bigger than a superhero.

With all the noise about successful people being rock stars and gurus these days, it’s easy to get seduced into believing you need to be some kind of super hero to succeed. When the truth is you’re already bigger than a superhero, a rock star or a guru.

Believing that only superheros succeed keeps you small, because it squeezes out all the foibles and quirks and talents that make you the unique gift to the Universe that you are. When you believe you’re supposed to have super powers, the powers you do have are crammed into the margins. You’re so focused on what you are not, so busy comparing yourself to others, that you lose touch with the brilliance you’re designed to manifest.

It doesn’t feel like you’re bigger than a superhero. It feels like you aren’t big enough. Cool enough. Connected enough to succeed at more than a middling level. You never get to experience yourself as gloriously effective and gifted.

Surprise: you don’t have to get out of costume.

My first thought about Wonder Woman’s crown was to yank it off. But I realized that yanking off a super-tight crown would hurt, which seemed like a move in the wrong direction. Somehow, the way to relief and integration had to be different, though it took a few minutes to find it.

So I sat until I sensed that the crown would be looser if the tiny muscles around my face and head softened. I imagined gentling myself, relaxing, and receiving—here’s the cool part—support.

Mmmmm… Sweet support. Not distraction or hiding to escape the pressure to succeed, but simple, always available support.

Support from rituals like the one I was practicing in that moment. Support from eating well, not because I should, but because I’m receiving nourishment. The support of spending time with friends, of asking for and receiving help from colleagues, of breathing when I’m anxious or wired.

You can keep the costume.

My first thought was that once you relaxed into support, you were supposed to take off the crown. But I saw that you can stay in costume once you settle into support. It’s no longer a constraint and a judgment. It’s a playful way to express yourself in the world just the way you are. An archetype that, well, supports instead of impedes you.

Relaxing is not escaping.

Relaxing into support is not the same as escaping pressure through distraction, contraction or hiding. It’s not numbing yourself with eating, computer games or oversleeping. (All of which I know intimately.)

It’s about waking up to what’s already there for you, even when the chips are down. It’s about trusting the resources and support you do have instead of straining to be different.

Ritual is the royal road to support.

Relaxing into support is easy when all is well. But Wonder Woman’s crown isn’t a problem when things are going your way. What you need is access to support when you’re tired and discouraged. When you’re feeling less-than.

And that’s where ritual comes in. Simple daily rituals connect you with support, even when you don’t feel inspired or connected. Rituals won’t always cheer you up or give you energy, but they will keep the channel open.

When the channel of support is open, the down times are shorter and you learn more from them. It’s a bit easier to detach from your inner critic. You don’t take the bleakness quite so personally.

You’re all the super hero you ever need.

You have what it takes to do more than middling work. To earn more than a middling income. You don’t need to be any bigger than you are to enjoy the life that is just-right for you.

So go ahead, play with your superhero costume. But wear it lightly. It’s not really the source of your power. 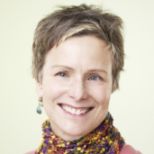 Molly Gordon is a business sage and trickster for the spiritually and psychologically savvy. Her lifetime project is to wake up. A Master Certified Coach and a Certified Facil… Read full bio