The Story Will Continue. ~ Tom Degan

Memo to the right wing: Wake up and face the dawn!

“Our economy is recovering, a decade of war is ending, a long campaign is now over. And whether I earned your vote or not, I have listened to you, I have learned from you and you have made me a better president….I have never been more hopeful about America. We’re not as divided as our politics suggest. We remain more than a collection of blue states and red states.”

The telephone rang just a little past midnight, rousing me out of what must have been a near-coma. On the other end was my 20-year-old nephew, Peter Dermigny, with the news I desperately needed to hear. The campaign of 2012 was over. Barack Obama was the winner. I had been sound asleep for just over three hours. Crisis averted.

Three months ago, I drove Pete down to the Orange County Board of Elections to become a voter. That’s a photograph of him on the left, taken on the day he graduated from high school. Handsome kid, huh?

When I took him to register, he signed up as a Republican. Knowing well his crazy uncle’s ideological bent, he said to me, “I hope you don’t mind, Uncle Tom. My generation’s going to save that party.”

Good for him. I sincerely hope they succeed. I made him walk home (just kidding).

Well, thank goodness and little green apples that’s over with. I was nearly certain when I went to bed on Tuesday night that America was about to commit economic suicide (or that the election would be stolen). Neither scenario transpired, thank God.

The right-wing powers tried to make it next to impossible for the President’s natural constituency to vote in the key swing states, but the people defied them. I hope that Governors John Kasich and Rick Scott understand that when they are up for reelection in two years, the voters of their respective states are going to remember those long lines, not to mention the hours missed from work. Congratulations to the citizens of Ohio and Florida—and to President Obama—for a victory well-earned.

To quote Colonel Pickering from Lerner and Loewe’s My Fair Lady:

Now do us all a big favor, Mr. President, and start behaving like an honest-to-goodness progressive. You have no future campaign haunting your every decision. Electoral politics are behind you. By the standards of your recent predecessors, you’re not that bad a president. Now is the time for greatness. And enough already with the freakin’ drones, all right? Jeez!

I haven’t been too thrilled with this administration. I know they can do better. I think that in a second term they will. That’s what is called “the audacity of hope.”

It makes me positively giddy with gladness and joy wondering how people like Karl Rove and those two hideous Koch brothers were feeling on that fine November morn. They spent several fortunes trying to unseat this president and they couldn’t do it.

I can just picture the rest of those nitwits inside the right wing scream machine reacting to the grim news that morning after Election Day. Sean Hannity is apoplectic. Rush Limbaugh is weeping in his sleep. Ann Coulter is under sedation. Dick Morris clutches desperately to the foot of a hooker. Rupert Murdoch is seeking asylum in Australia. Glenn Beck is sucking his thumb in the shower. Clint Eastwood is hacking away at a chair. Bill O’Reilly has tied himself to the furnace. Michael “Savage” Weiner’s family is keeping him away from sharp objects. George Will is talking to dead people. Bob Hope is talking back. Life is beautiful.

Good news: The Democrats did pretty well in the election.

Bad news: The Republicans will still control the House of Reprehensibles.

My hero, Sherrod Brown, will be a senator for at least another six years, Claire McCaskill handily defeated Todd “Legitimate Rape” Akin and Elizabeth Warren is on her way to Washington! Her victory over Scott Brown was the best news all night. I’m just crazy ’bout that gal!

I rarely “love” a politician, and it takes me a while to get to that point. I’m not ashamed to tell you that, as far as Elizabeth Warren is concerned, it was love at first sight. I’m so happy about her success I can’t even put it into words.

But the biggest surprise of the evening was in my own neck of the woods (District 18, NY). My congresswoman, a Tea Party marionette named Nan Hayworth, was sent packing by a young upstart named Sean Patrick Maloney who is openly gay! I swear I had no idea that that was going to happen. I thought the poor bastard didn’t stand a chance! The area I live in is so damned conservative, it always stuns me when it’s nudged even a smidgeon to the left. Perhaps things are changing here in the rock-ribbed Hudson Valley. We shall see.

More bad news: Almost half of the country voted for Mitt Romney.

This begs the question as to whether or not nearly 50 percent of the electorate was unconscious during the years 2001 to 2009. Let’s hope that within the next four years most of them will come to understand what a huge mistake it would have been to send “der Mittster” to the White House.

There is a very good chance that he will be their nominee in 2016. Like I said, life is beautiful.

Bad: Michele Bachmann will still be representing the people of Minnesota in Washington, D.C.

What the hell is the matter with the voters of that state? Bob Dylan must be awfully embarrassed.

“Do you remember? Remember? The fifth of November!”

“Here’s where I turn on the old cliché machine: This is the dawn of a new day. The election of Barack Hussein Obama last night as the 44th president was a transforming moment in the history of this country, a country that literally was built upon the lacerated back of the Negro Slave. We’ll never be the same again. Never.”

I wrote the above paragraph in the wee small hours of the morning four years ago when Barack Obama was elected to the presidency. I was pretty drunk at that moment (celebratory libations, you know?) but I stick by what I said then:

We’re not the same country we were before Election Day 2008.

My hopes that Obama would prove to be the second coming of Franklin D. Roosevelt were soon dashed upon the rocks of expectation, but I know he has the stuff that makes a great president. It’s not too late for him to become one.

Now for my first good night’s sleep in months. I could use it! 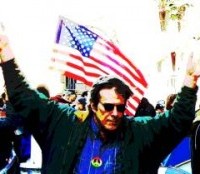 Tom Degan is a 54 year old video artist but now makes his name by writing about politics and current events on his blog, The Rant. “I was a Democrat, until they became GOP-l… Read full bio