It’s amazing what we may discover when we have so little.

On the second day of my ten day silent meditation retreat, during the nightly dharma teaching, the phrase “no itching is eternal” stuck in my mind like gum on a shoe.  These words sound banal at first, obvious maybe, perhaps slightly profound. And indeed its true.

Nothing itches forever; nothing lasts eternally. Nothing.

Accepting this with profound and direct awareness as the Buddha did some 2,500 years ago is, according to some, the precise way to reach the truth. And resistance, well, resistance is ultimately futile. In the Buddha’s own words, “this too must pass.”

And now, imagine again those four simple words, “no itching is eternal,” but this time spoken with a soft, musical South Indian/Burmese accent, floating out of the mouth of probably the most famous serene, rotund meditation teacher on the planet.

None other than S.N. Goenka—also known lovingly as Goenkaji, the man who is credited (by some) for bringing the ancient meditation technique known as Vipassanā back to India. According to Goenka, this technique has been handed down for centuries through a pure lineage, straight from Shakyamuni, the Buddha himself. Today Goenka’s centers span the globe and have taught millions of people this age old technique in learning to watch the mind and develop equanimity.

Vipassanā in Pali, the ancient language of the Buddha, means insight into the true nature of reality. For me, those ten days learning the Vipassanā  technique were bursting with an entire fruit tree of insights. I might say, an orchard even. Although at first, it was difficult to tell what exactly was insight and what was my leaping, chaotic mind projecting a string of fanciful movie images.

But as my mind settled over the days, certain things became much clearer.

This clarity that emerges is assisted by the total unplugging of oneself, taking true retreat and having the opportunity to live like a monk or a nun. We remained in complete silence, were served only two vegetarian meals a day, and tea. It’s amazing what you begin to look forward to when you have so little. I found I could clean my teeth for hours. Plan out whether to have two bananas and an orange at tea, or…two oranges and a banana. To eat raw first or cooked. I spent at least three days trying to remember which method was better for my digestion and would produce the least amount of gas during afternoon sits. My hearing intensified; my sensitivity to the wind, the sun and of course, the itching.

Itching, like many things, naturally arises during a Vipassanā course.  Suddenly an itch might pop up innocuously on my head.  By the time we got to day four, we were not supposed to move, so resisting scratching became an entire battle of silent wills that for me was often accompanied by Janelle Monae’s song, ‘Tightrope…the highs and the low’s.‘ Finally I would give in to an itch, scratch furiously only to have three more pop up in several other places.

Ah, just like life: unfortunately, the suffering doesn’t just evaporate when we react.

The reaction itself is what causes the suffering.

The sensation, be it itching, sorrow, or anger simply dissolves, passes, changes form  in a matter of time. And only through awareness, deep and utter acceptance is it ever purified and resolved.

I soon found that itching was the least of my bodily discomforts. Other sufferings included back, shoulder and leg pain, hips throbbing, gas and bloating, uncontrollable sneezing and the most odd, a strange need to continuously swallow. As I sat swallowing and swallowing one afternoon, mentally apologizing to my serene looking neighbor who hadn’t moved her entire hour, wondering why on Earth someone would have so much saliva, or crusty eyes, or better yet, why would I be sitting here hour after hour on this inane pile of ragged cushions…sigh.

Suddenly, on the third day, something very different than the first two and half days happened. My body straightened naturally, my spine fell precisely into place, each little disc naturally stacked upon the next as it is supposed to. Pain released from my back and swallowing no longer mattered. Breath evened out and wow.

The release of pain in my back, I realized was like a torrent of potentiated energy that had been unable to express itself for god knows how long…months? Years?

This release caused a surge of energy so strong that I leaped out of meditation that afternoon, practically ran to tea, drank with great gusto, desperately wishing I could swoon aloud, sing, beam poems.

Later, feeling so wildly energized I wondered if I was almost experiencing a kind of madness? I asked the teacher, who calmly told me that this too would pass. By then I had a slight aversion to the radiance and felt relieved when indeed, later that night (much later) I finally began to come down a bit. Oddly, that never quite returned. Then once it was gone, of course I missed it. Back to the cushion. Back to the cycle of pain, battle, then  awareness, surrender and finally, the sweet insight.

On the fourth day I almost left. Everyone who has ever taken a Vipassanā course or ever heard about those who left. I have been hearing about Vipassanā for a decade and a half and was always intrigued by that comment. They seem to be relegated to the group that couldn’t quite cut it. By the end of the course however, I felt a whole lot of compassion for them. My desire to leave came up in the powerful shape of fear. I am a mother and my deepest attachment is no doubt my sweet, clever, mischievous eight year old daughter. During the entire afternoon teaching of the actual Vipassanā I sat in my first silent, raging ‘storm’ as Goenka calls them, projecting an intense movie of my daughter’s disappearance and demise. Being unable to call her up was excruciating.

I have prided myself for years on being the mother who is able to handle both a dharma practice on one hand and the life of a householder on the other with great ease and balance. Each silent minute that passed during that fearful storm was an eternal hell. Rationalizing that my family was close by, would come if something happened barely helped.

As the storm slowly subsided, receding by the afternoon of the next day, I felt weak and ultimately, grateful. Grateful for my daughter which allowed me to see my own attachments to the world. To my husband whose support makes it possible to go on retreat…to my mother and father for raising me…to my family and friends who listen and love me…the arising amount of pristine compassion that followed the storm was beautiful. My own stillness watched the perfection of one tear rolling quietly, softly down my face with astonishment and utter beauty of this ever-changing world. With a sigh I realized the impermanence of it all, the law of nature as Goenka states, is the law of change. The direct experience of this, over and over again produces equanimity that stabilizes the mind.

By the time I left the Vipassanā retreat, my mind had reached several moments of stillness. No doubt, the technique works and is a priceless support to anyone new or old to meditation. The equanimity that one can cultivate in ten days can certainly be applied to the rest of one’s life. As my sister summed it up, ‘Now I know I can face anything.

If anything comes up in my life, I remember my Vipassanā course and think…if I did that, I can do anything.’ 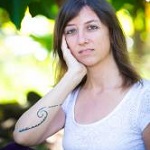 Katalin Koda is an intrepid explorer of life, love, and the sacred mystery that lies between this world and all others. When not writing you can find her on top of Kilauea,… Read full bio