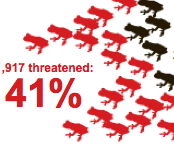 The Sixth Extinction is Upon Us.

Can We Survive Ourselves? Yes. But Will We?

As Yvon Chouinard, founder of Patagonia puts it, it’s selfish to be an environmentalist. Meaning, if we care about ourselves, we need to wake up to the effects of our actions.

It’s time to learn from our mistakes and correct them, before we become one of our mistakes:

Years ago, I interviewed leading environmental hero Lester Brown. He said we were doomed—unless we decided as a society, as we did before WWII, to rapidly mobilize. Five years later, little has changed for the better. The key, he said then, is media. Communication. Education.

Where will we find the will to fight our own laziness, greed and selfishness?

Are we living in during a mass extinction event?

The Earth is in the midst of the sixth mass extinction of both plants and animals, with nearly 50 percent of all species disappearing (ia.ucsb.edu)

The Earth could be on the brink of the sixth mass extinction in history, claim scientists. (telegraph.co.uk)

Are We in the Middle of a Sixth Mass Extinction? – Graphic – NYTimes.com (nytimes.com)

There was a paper in Nature a few months back addressing this question. Essentially, we are not yet in a mass extinction. There’s a background rate of extinction that we can estimate from the fossil record. Extinction rates now are exceeding that, by quite a bit. However, we are not yet at a mass extinction (defined as loss of ~75% of species). That being said, if we don’t take substantive steps towards conservation of both the marine and terrestrial environments, we could reach mass extinction within the next few centuries. That may seem like a long time, but in geological terms it’s the blink of an eye.”

From the paper cited above: “a critical question is whether current rates would produce Big-Five-magnitude mass extinctions in the same amount of geological time that we think most Big Five extinctions spanned (Table 1). The answer is yes (Fig. 3).”

Five mass extinctions have nearly wiped out life on earth. As Annalee Newitz writes in her new books, the sixth is coming.

OVER THE past four years, bee colonies have undergone a disturbing transformation. As helpless beekeepers looked on, the machinelike efficiency of these communal insects devolved into inexplicable disorganization. Worker bees would fly away, never to return; adolescent bees wandered aimlessly in the hive; and the daily jobs in the colony were left undone until honey production stopped and eggs died of neglect. Colony collapse disorder, as it is known, has claimed roughly 30 percent of bee colonies every winter since 2007.

If bees go extinct, their loss will trigger an extinction domino effect, because crops from apples to broccoli rely on these insects for pollination. At the same time, over a third of the world’s amphibian species are threatened with extinction, and Harvard evolutionary biologist and conservationist E.O. Wilson estimates that 27,000 species of all kinds go extinct per year.

Are we in the first act of a mass extinction that will end in the death of millions of plant and animal species across the planet, including us?

Read the rest over at the Daily Beast, or:

Excerpted from the forthcoming Scatter, Adapt and Remember by Annalee Newitz. Copyright © 2013 by Annalee Newitz. Printed with permission by Doubleday, a division of Random House, Inc., and Viking, an imprint of Penguin Canada. All rights reserved.

"Saying goodbye to a species, the very last male Northern White Rhino. A powerful photo of 2018." Thanks, #traditionalchinesemedicine and #superstition. "When the last tree is cut down, the last fish eaten and the last stream poisoned, you will realize that you cannot eat money.” ~ Alanis Obomsawin Not all zoos are awful. Some are truly devoted to #education and #empathy and #conservation. A ray of hope via #sandiegozoo. Comments via #Reddit: "The #SanDiego #Zoo has a program working to bring the population back. Just recently they used a northern white rhino zygote with a southern white rhino surrogate and I believe last I read, it took and she's pregnant. If this works they will be able to restore a population but most likely never leave captivity. Good thing they have 100s of acres of open land to roam. If you've never been, the San Diego Zoo: Safari Park is amazing & worth the trip." "They are also responsible for helping bring the #CaliforniaCondor back from the brink of extinction by successfully breeding & releasing them back into the wild. They're a great zoo!" "As an annual pass holder not only is this kind of work awesome, but the zoo itself is fantastic. Best zoo I've ever experienced." And: "On a brighter note the Greater One horned Rhinos in South Asia, which were on the verge of extinction around 2010 due to #poaching, have grown in numbers from ~ 200 in the mid 2000’a to over 4000 rhinos today, due to conservation efforts in Nepal & India. Although the problem is far from fixed they have been downgraded from A endangered species to Vulnerable on the IUCN red list." And: "Not sure if people will see this—but everyone should know that the Earth has gone through 5 extinction events. And we're actually in the midst of an extinction event—but the problem is that we are causing this extinction event." On elephantjournal.com, read "We're doomed, unless" or search "the Sixth Extinction." It's good to know about, so that we can avoid making it worse. Great article on NY Times recently about the insect extinction going on right now. We are our ecosystem. #elephantjournal #rhino #rhinos #extinction #endangeredspecies

Earth faces sixth ‘great extinction’ with 41% of amphibians set to go the way of the dodo (theguardian.com)

A special analysis carried out by the journal indicates that a staggering 41% of all amphibians on the planet now face extinction while 26% of mammal species and 13% of birds are similarly threatened.
Similarly, a quarter of all mammals, a fifth of all reptiles and a seventh of all birds are headed toward oblivion.

A good source of information for the layman is: The Sixth Extinction: An Unnatural History by Elizabeth Kolbert
“A major book about the future of the world, blending intellectual and natural history and field reporting into a powerful account of the mass extinction unfolding before our eyes
Over the last half a billion years, there have been five mass extinctions, when the diversity of life on earth suddenly and dramatically contracted. Scientists around the world are currently monitoring the sixth extinction, predicted to be the most devastating extinction event since the asteroid impact that wiped out the dinosaurs. This time around, the cataclysm is us. In The Sixth Extinction, two-time winner of the National Magazine Award and New Yorker writer Elizabeth Kolbert draws on the work of scores of researchers in half a dozen disciplines, accompanying many of them into the field: geologists who study deep ocean cores, botanists who follow the tree line as it climbs up the Andes, marine biologists who dive off the Great Barrier Reef. She introduces us to a dozen species, some already gone, others facing extinction, including the Panamian golden frog, staghorn coral, the great auk, and the Sumatran rhino. Through these stories, Kolbert provides a moving account of the disappearances occurring all around us and traces the evolution of extinction as concept, from its first articulation by Georges Cuvier in revolutionary Paris up through the present day. The sixth extinction is likely to be mankind’s most lasting legacy; as Kolbert observes, it compels us to rethink the fundamental question of what it means to be human.”