As a girl or woman, have you been pounded on, beat up or bullied by a stronger boy or man? Knowing all along you didn’t deserve his abuse?

Starting when I was seven, my older brother aimed his considerable anger at me. Needing control over someone, Michael used me as his personal punching bag.

As a girl with a huge heart and little defense, I was an easy target.

One time, when no one was home except the two of us, Michael dug a worm out of the earth (which he knew I didn’t like) and hoisted the worm towards my face, threatening to squish the worm on me if I didn’t take my clothes off. I screamed at him to stop. Fortunately, my Mom came home. But unfortunately she never recognized the degree of terror Michael repeatedly inflicted on me.

Many times while my parents were away, he punched me with a sort of morbid curiosity. These torture sessions included hitting me in the stomach, arms, thighs, mouth and my eyes. He subjected me to acts of disrespect such as peeing on me, locking me out of the house and making me believe he was going to hang me.

While my parents were still married, I would tell my Dad. Then, Michael would get punished physically and sent to his room—all that did was feed his vitriol that he took out on me later. I was stuck in a horrible circle. My Mom was so scared of him that she wouldn’t dare raise her voice. If not for my middle brother Andrew steering Michael away, I don’t know how I would have survived those years.

What a terribly helpless feeling it was to be a girl…physically weaker…kinder and generous by disposition…living in the same home with an angry older brother.

The bottom line is as a girl I felt weaker, not as good, not as smart or strong as my brothers. I did not feel safe, protected or that anyone had my back, aside from Andrew. As a seven-year-old girl, this dynamic marked the beginning of my relationship with the masculine. Pretty scary to face the world with such a belief system.

The trajectory of my life followed suit.

I re-created relationships with men where I felt less-than and unable to stand up for myself without a fight. My experiences extended to interactions with anyone who I perceived as a bully exerting control or taking advantage of my feminine disposition.

Fast forward to today: once again, I feel like I’m getting punched in the gut.

This time, it is by an irresponsible, entitled hostile tenant who I evicted but refuses to leave. He has threatened me with angry tirades; he bullies me by citing laws and codes created in his own mind. He demands to speak with my mortgage and insurance companies. And, he pretty much acts as though he owns my house.

My frustration is that he refuses to leave me alone; he won’t move out of my house even with a 30-day notice. He actually told the welfare office he isn’t leaving. This crazed Iraq war vet plans to purchase my house (even though he has no money and no one will lend him a dollar). I just want him to go away and stop dumping his bitterness about life on me.

So what do I do? This unstable angry man is forcing me to take him to court and use the legal system to extricate him from my property.

The thread between my brother, tenant and other relationships is reflected in the bullying from my early childhood by the “masculine.” Over the years, I have been disassembling the story of needing to fight/defend in order to heal/unhook my belief that I am a victim. I’ve learned to see myself and my perpetrators with compassion.

Michael and I were both scared and disempowered. His default means of survival got expressed through twisted aggression, to which I adapted my own survival strategies to protect myself. Deep inside, so many boys grow up in our society to become wounded men with the feeling of never being fully respected. These feelings build up into a distorted sense of male entitlement which often leads to bullying girls and women.

This life experience is offering me a powerful opportunity to heal a young helpless tormented girl still living inside me. On a larger scale, I feel myself as part of the collective unconscious of women and girls struggling to feel safe and honored by men.

In quiet moments, I dive into myself and hear a voice: ”Please protect me! Don’t leave me alone with him! He is so mean and scary. Take care of me and keep me safe!”

As I breathe deep, I feel her loneliness, pain and sorrow. I feel how the girl buried her beautiful playful spirit inside a safe haven. I step into her world—and I meet a part of myself possessing the sort of unbounded love, compassion and strength that a mother would bestow on her daughter. I reach out as the girl beckons me; we embrace in a warm blanket of love. The girl says she has been waiting for me—she doesn’t ever want me to leave again.

It’s a reunion with myself between the girl who felt abandoned and the woman who has acquired the wisdom to heal.

Now I have her back and she has mine. In the embrace, the girl and the woman become one. She becomes as safe as am I and I feel her innocent purity again.

We stand together, knowing we are love. We are woman, mother, girl. And, we have nothing to fear. We can relax into the power of the feminine and we surrender to life with open arms and the choice to say yes or no to the masculine!

My voice is heard. My love is free. My heart celebrates.

And there is peace, nurturing and support between my little girl and me. 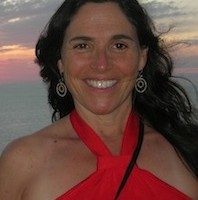 I offer to you who have a deep yearning to re-discover your essence…Your lovability…Your truth… To stand in you power as a woman, integrated & whole wit… Read full bio