Why I’m Not Buying the Whole Forgiveness Trend in Yoga & Spirituality.

Is it just me, or have you noticed that the word “forgiveness” has been thrown around this year ad nauseam as a spiritual cure-all in Facebook posts, on Twitter and even on Oprah?

Forgiveness has been designated as the number one way to be more spiritual and has been heralded by some as the definition of yoga itself.

One prominent yogi named 2013 as the “Year of Forgiveness” on Facebook.

It’s become a buzzword spackled haphazardly, guaranteed to land a lot of “likes,” but I think forgiveness deserves to be handled with more care and consideration.

Now, don’t get me wrong: I am a huge fan of forgiveness as well as unconditional love, compassion and empathy. After all, studies show that people who forgive are happier and healthier than those who hold resentments.

Leaders have been dropping the forgiveness buzzword like it’s going out of style—have you succumbed to the peer pressure and done your own post or two?

Read on for a forgiveness shakedown from someone who has been burned, and has forgiven aplenty.

1. to stop feeling angry or resentful toward (someone) for an offense, flaw, or mistake

2. to grant pardon for or remission of (an offense, debt, etc.); absolve.

When we are betrayed, it is healthy to experience a blast of initial anger and resentment. It’s rare to be able to let go instantly. And the more you care about that hurt, the harder it is to release.

No one wants to be angry and bitter their whole life just because someone betrayed them or caused them harm in the past.

The healthy choice is to eventually release the blasting, boiling kind of anger and replace it with the more conscious kind.

As long as your anger does not boil over, your mild simmering anger will be the thing that helps you discern and protect yourself and others from getting hurt again.

In other words, keeping some of this kind of self-aware anger around is smart and even healthy!

If you release the boiling anger, but keep a small grain of sand that you could rub between your fingers, that tiny grain of anger is what will help make you stronger and more aware.

Hot burning anger can be released further when you examine your own part in the unfolding of the betrayal and take responsibility for the ways in which you may have contributed to the circumstances in which the betrayal occurred. This empowers, rather than turning you into a victim.

It’s the second definition—the pardoning—that can be risky to others in the future and can inhibit a fuller, more meaningful conversation.

Let’s break this down:

We live in a relative world, a world of cause and effect, a world with consequences.

While we can tap into the realm of unconditional love and oneness through meditation and yoga, the last time I checked we were on the planet and in a body and do have other people to consider.

We are each other’s keepers.

If we pardon someone too soon (“idiot compassion“), what is to stop him or her from repeating their misdeed and hurting another?

What assurance do we have that a person won’t replicate the same harmful behavior (which is typically the case unless significant action toward changing has occurred)?

What if they do it again and hurt someone else because they never had someone set a clear boundary and tell them no?

This is when having that small grain of “anger sand” could come in handy—it helps us remember that this person may not be trusted yet.

To wit, yogis, because of their compassionate (but not always discerning) nature can easily fall prey and are quick to blindly forgive.

I’ve been there; I am as stubborn as they come. I will hold out hope for someone far beyond healthy limits and I’ve been burned as a result—an embarrassing number of times.

I’m going to say it: forgiveness must be earned.

Sure, a person will have my compassion and my best wishes. I will feel for them. I will trust that they will heal and change on their own timeline different than my own (perhaps in a new lifetime). But pardon them too soon? No—I don’t see how that serves them.

When someone points out, “Did you consider that you might be enabling this poor soul?” the yogi or spiritual leader will say things like:

“But they are only human.”
“I am all about unconditional love.”
“Love is the answer.”
“People make mistakes”
“But yoga is forgiveness.”

Let’s break it down again.

“But they are only human,” or “People make mistakes:”

Yes, they are human—and so are all of the people this person has harmed in the past and will, likely, harm in the future! Does being human mean we get a pass for being a liar or an abuser so we can turn around and be one again?

This is a cop out.

Yogis, we can do better!

Yes, I am human and I’ve messed up royally and still make terrible errors…but I sincerely want to learn from my mistakes. I want to do the hard work to grow and change; I expect the same when someone I respect has blundered.

We can do better than just hiding behind the “being human” line.

Don’t just take my word for it—listen to Jason Mraz’s song, Only Human for further insight.

How about rebuilding trust before we pardon too soon?

“I am all about unconditional love:”

Meeting each other’s needs unconditionally is certainly one of the most loving, devotional endeavors one could embark upon.

Furthermore, just because we can be unconditionally loving does not mean that we are obligated to hang out with, support, do business with, or condone proven liars, cheaters, abusers, rapists or criminals because we know they are hurting inside and deserve love!

And it’s interesting that our forgiving yoga culture makes such a statement even necessary.

Such individuals would be better served with conditional or “tough” love—i.e. if they were allowed to hit rock bottom and then rebuild themselves.

They don’t know it, but their inner child is crying out to have someone set a boundary. Maybe when they realize that no one will put up with them, then and only then will they finally seek the professional support they need.

There’s a reason that the global governing body of cycling has banned Lance Armstrong from the sport. He has not proven that he’s healed his lying problem and won’t misstep again. So, no more racing for Lance.

“Love is the Answer:”

Well, if love is the answer, then I guess there are no more questions to ask. That would be a pity. Curiosity, interest and asking the tough questions are also great forces for enormous change in our world. I hope we never stop questioning things, even if one of the many possible answers happens to be love.

Have you ever seen yoga defined as forgiveness in any of the yoga texts you’ve studied? I haven’t.

Now, why do I care about all this? You must be thinking I’m…unforgiving.

My concern centers on how yoga studio owners, yoga leaders and spiritual teachers respond to situations that negatively affect yoga and spirituality.

For example, when a yoga studio hosts a teacher who is a known liar or has abused his or her power, is it okay? One studio owner told me that she forgives all the “bad boys of yoga.”

When, as leaders, teachers or yoga studio owners, do we stand up to protect students?

How hard is it for our role models (or in this case the bad boys of yoga) to follow a yama and niyama or two?

Forgiving too soon does not help these bad boys—nor does it give our students the respect they deserve. Simply forgiving and loving has too often become an excuse to disengage and not enter the dialogue that would be healthy for yoga.

There is a beautiful spectrum of attributes beyond love and forgiveness alone. Attributes such as discernment, integrity, ethics, protectiveness and values are just as important, if not more so, in the full scope of life.

I think we owe more to our students than to bypass thoughts, emotions and process by simply pardoning. I think we can still teach on compassion without inviting the bad boys back into the classroom.

As seekers, we show up in a vulnerable state—the potential to hurt students with false guidance (even in the name of love and forgiveness) is that much more possible.

I hope we will inform students about making their own choices.

I hope we can start to teach critical thinking in yoga and spirituality.

I hope we can do more than simply love and forgive.

I hope we can hold each other accountable to growth and being excellent, precisely because we’ve made mistakes in the past. Our students will appreciate it—and perhaps, in the process, we will find life richer than we imagined.

So the next time you see a post about forgiveness, remember this conversation and perhaps think twice about being so quick to hit “like.” 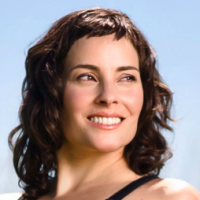