Eulogy for an Abandoned Black Dog.

Kobi was a shelter rescue; I picked him up when he was 13 years old.

My girlfriend Jo and I stopped by the Los Angeles County Castaic shelter the day after he had been unceremoniously dumped by his previous owners.

What was especially disturbing for me was hearing from the shelter workers how, after signing Kobi over to the shelter (along with a litany of excuses why they were dumping him), the father turned to his three daughters and excitedly said, “Ok girls, let’s go look at the puppies!” as if Kobi was no better than a used car one disposes of when it gets old.

I can only hope the three daughters learned the lesson their father was teaching them that day: that in their family, when something gets old, it’s perfectly acceptable to dump it off somewhere so you don’t have to deal with it anymore.

(I wonder if when dad gets old, his daughters will remember that lesson.)

I had just lost two elderly dogs the previous year that I had had for their entire lives and wasn’t even sure if I was ready for another dog—but I had a “feeling” I should stop by the shelter and just “see” who might be there.

Getting an adult dog definitely wasn’t in my thoughts, but the shelter told me that Kobi would most likely be put down within a day or two, since elderly dogs rarely get adopted. Certainly dogs with health issues like Kobi wouldn’t.

When I took him out of his pen, he immediately began looking all over the place, trying to figure out where his owners had gone. He was sad, lonely and very confused.

I felt horrible for Kobi and made the shelter promise not to put him down without calling me. I don’t like to make decisions when I’m extremely emotional, which I was after hearing his story.

After a sleepless night thinking about him, I went back the following morning and got him.

Kobi was in rough shape. He had cataracts, so his eyesight wasn’t great. His hearing was lousy as well. At times, his breathing would become labored even when he did nothing. Turns out, he had COPD. The vet said he had likely been in a home with smokers.

The worst part was that his rear end was very atrophied and one leg just hung, hooked over the other one. He hobbled along on three legs and was extremely arthritic in the rear.

The vet wanted to prescribe some expensive pain meds but after talking with another vet friend, I decided to try a regimen of Bayer aspirin and glucosamine pills. (Kobi, of course, would spit the pills out, no matter how hard I tried to hide them. I eventually figured out that dissolving them in a little bit of water and dumping it over his food worked quite well.)

He needed exercise but overdoing it could hurt him. He liked to sleep by the house, so I placed an automatic water bowl on the other side of the yard, which forced him to walk every time he wanted to get a drink.

Six weeks later, he was using all four legs again. Granted, he was still “creaky,” but he was walking on all fours—and the leg that wasn’t being used at all was now bearing equal weight.

It turns out he was also house trained, didn’t bark without a good reason and was just a pleasant, sweet dog.

How anyone could have dumped him was beyond me.

A short while later, my girlfriend Jo ended up adopting two puppies out of the pound and they all became buddies. The puppies would drive him nuts with their endless energy and he would bark to tell them to back off, but he never, ever snapped or bit them.

Interestingly, every time they left, Kobi would find one of their toys and carry it to me and drop it at my feet and then look at me to say, “Sooo, where are the two things that usually play with this?” If Jo came over in her truck without them, he’d do the same thing, as if to say, “Uh, I think you forgot something!”

One night, Kobi and the puppies began barking incessantly and when I went outside, I heard the distinct sound of a rattlesnake. Kobi actually kept stepping in front of me, as if to steer me away from the rattler and I had to have Jo hold him back while I dealt with it.

A short while later, Jo and I found another abandoned puppy at the park near my house and I took her in and named her Hera. Kobi immediately accepted her as well.

Even though Kobi’s body was shot, he still had the heart of a young dog. When we would go for walks with the puppies, he always wanted to come along. We made the mistake of trying to take him with us a couple of times but he could only manage about a block before his breathing would become labored. But if we tried to go without him, he’d bark and howl at the gate.

We began putting him inside the house with a treat and then “sneaking” off while he was preoccupied—I don’t know if he ever figured out what we were doing. Maybe he knew but thought, “Take off, I don’t care as long as I have one of these yummy treats!”

Whenever we came home, if he saw us, he’d come to the gate, along with the other puppies and he would patiently wait while the puppies would push their way to the front in their eagerness to say hello. The puppies would run off after they got their initial greeting and then Kobi and I would walk back towards the house together.

Many times, I would come home and he wasn’t at the gate. I’d find him under the camper where he liked to sleep and when I called his name, he wouldn’t respond. A few times I thought he had died, only to discover that when I touched him, he’d awake, startled. Then, I remembered his hearing was almost gone.

Jo and I took the three puppies for a long eight hour hike this past Saturday. When we got home, the puppies ran into the back yard and then one of them scratched on the rear door, something they never do. When Jo answered, all three dogs were on the step looking over at Kobi, who was lying nearby.

Jo called to me and said, “Honey, I think Kobi has died.”

My initial response was, “No, he always looks like that.”

But when I went to check on him, he was clearly gone. From his body position and location, it appears he passed in his sleep.

In the last week, he had slowed down a bit, wasn’t eating as much and was having more trouble with his rear end. I thought I was going to have to take him in to be put down. Since he had fluctuated before, I figured I’d give him a few days and see if he got better.

I think he was telling me he was getting ready to go.

When I adopted Kobi, I knew our time together was going to be severely limited. As long as he didn’t die at the shelter, I figured that was a good goal to start with.

The vet told me Kobi might only last a few weeks. More likely he’d be around for a few months but she said anything over a year would be surprising, and definitely not more than two.

Kobi lived for 14 months with us.

I never thought I’d adopt an elderly dog, but I’m glad I did. Kobi was extremely easy to care for. All he wanted was some food, love and a place to call home. His health issues presented some challenges, but any pet will have issues that need to be dealt with. He was already house trained, didn’t chew, didn’t dig, wasn’t a big barker, so there were distinct advantages to taking a dog like Kobi over a puppy that would need constant supervision and training for several months.

Kobi’s passing was hard on us, but the time we spent together, his companionship his loyalty and his friendship, made it well worth it. Even if I knew he would have only lasted a month or two, I still would have taken him. Allowing a dog like Kobi to die in a shelter wasn’t acceptable to me.

Older dogs can present unique challenges, so it’s important to spend time with them at the shelter, to get to know them as best as one can, and to figure out their personalities and make sure you’re compatible before taking one home. 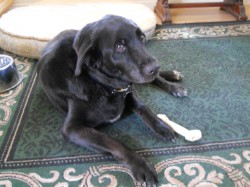 Some say we “saved” Kobi and gave him a lot. Actually, it went both ways—Kobi gave us a lot as well and he will forever have a place in our hearts.

I knew your time with us would be short, but I’m grateful for what we did have, for your friendship, and for having you in my life.