I realized that a lot of readers don’t know me and might be under the assumption that I am in the midst of an eating disorder, over-exercising,and not receiving any help. Well, I thought to clear things up and let those of you who don’t know me feel reassured that I am not smack in the middle of crazy, I would share the following article (with some changes) I wrote for Elephant Journal awhile back.

I do want to say, that for some of us, when things are feeling chaotic in our life, it is easy to slide a bit backwards.

This does not mean we are not making progress or cancel out the successes we have had in slaying this thing. Disordered eating and body image can find you when you least expect it, even if you think you are totally over it, like when you increase your exercise for an empowering goal such as running a half marathon with your best friends in the world.

And this is why I write this blog. To help those who are in the thick of it, or still have the shadow of it (like I do), or slide back once in a while. I want us all to know that we are not alone. This blog is about healing.

“You will never find a stronger spiritual opponent then your own self.”

Confessions of a Food Restrictor

In 2009, I made the decision to face my disordered eating. It was a dark creepy crawly which followed me around for more than half my life. (It is not unusual for women in their 40s or older to have untreated eating disorders for 20, 30 or even 40 years.

I decided it was time to let go. I could do this. But I needed help—yoga wasn’t quite enough.

So I called the experts and landed myself in an office the color of fog and ocean. Soft blues, browns and grays. The colors of healing. I supposed because this was a place for anorexics, bulimics and eating disorders not otherwise specified (like myself).

There was a large rubber plate of fake food next to the tissue box. On this fake plate was a mound of beans, a thick slice of bread, a pile of broccoli and an unidentified piece of meat. I liked to run my fingers over the beans and feel their lumpiness.

It was in this ocean room while I fingered the beans when Mark told me I was a restrictor. “Are you sure?” I asked. “Wouldn’t I be thin if I did that?” As always, I was hyper-aware of my fat-padded body which refused to be the size I wanted it.

“Well, not necessarily,” said Mark, a registered dietician trained to work with eating disorders. His hand reached up to touch his tie. Mark always wore a shirt and tie. He was 20 years younger than me and at first his youth threw me. How could a clean cut baby-faced twenty something counsel me, a middle aged woman who had been dealing or not dealing with disordered eating probably longer than he had been alive? But over time he proved himself.

He told me that we cannot pick the bodies we want. I wanted to be slim, slender, thin, and bony. Any and all of the above. “It doesn’t work that way. We don’t get to choose our bodies.” Mark said and held my gaze with kindness. He was not going to back down.

“So what if I’m a restrictor. You mean I don’t eat certain foods or I hold back on the amount I eat? Isn’t that normal? I think everyone does this to some degree.” Not for the first time, I mentally noted that the rubber mound of beans were more than one serving of food and who would eat both beans and bread at one meal? Too many carbs.

Mark explained to me as if he had said this one hundred times before, “A restrictor is someone who counts calories.

I interrupted him. “I don’t count calories. So old school.”

“Or,” his voice got firmer, “someone who has so many rules around food and the rules give more power to food than food actually has.

“I’m a yogi. Of course I have rules around food.”

Mark ignored my yogi comment and continued, “When you give food more power than it should have and continuously restrict, some people’s brains become obsessed.”

Well that was truth. My brain was obsessed. If I wasn’t thinking about food, I was thinking about losing weight or about how my body was too fat. All the time. All the fucking time.

“And then what happens is you start overeating, binging, or develop weird eating habits to compensate for the restricting.

He pegged me. For the next six months, I worked closely with Mark to undo the damage of restricting. He had me write down everything I ate so I could get a clear look at my eating patterns.

He had me throw out my long list of rules and trust that I knew how to eat in a way that served me. No food was off limits. For the first time in years, I ate fish and chips with tarter sauce, cheeseburgers with french fries and downed it with a coke. I lost ten pounds. But more importantly, I became unafraid of food.

My cupboards could be filled with potato chips, Oreo cookies or kale and it didn’t matter. I no longer stuffed food down my throat, engaged in three-hour work-outs for damage control, or bargained with myself that I would eat nothing but rice cakes the next day.

I wish I could say the story ended there but disordered eating is not so simple; it looks for holes where it can slip back in.

When my home-school hippie friends all went raw, it was seductive. I fantasized how beautiful I could become ingesting all that vital alive food instead of cooked dead food.

When it became hip to renounce gluten, renouncing wheat tempted me like cocaine. My mind envisioned the svelte lady I could be giving up bread and pasta. But through my work with Mark, I knew these ways of eating were ultimately restricting and making harsh rules around food to lose weight would trigger my lopsided ways. I had to trust my body knew what it needed.

I feel like I have come all the way around now and can finally let go of food rendering me powerless.

Food can heal. Food can harm. But in the end food is just food.

The work I did with Mark on examining my rules and trusting myself around food, plays a big part in my life. Every time I get tempted to restrict or eat out of control, I observe my self. At some point I stop and say, “Hey cut it out”

Instead of beating myself up for poor behavior (a shame cycle) I shine a spotlight of love, compassion and understanding around my crazy till I know it to be my angel.

Hey Body—I think I love you. These days I am so much more than just a body.

Whenever we choose to walk the path of healing, we change the direction of our life. 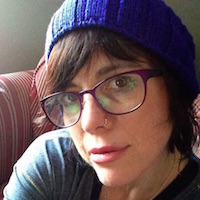