Musings from the Mysore Mat.

I’ve had a daily—okay almost daily—yoga practice for a little over 11 years now.

Around three years ago, by a combination of grace and coincidence, I began Mysore practice. I’d taken a bunch of led primary classes before that, so I wasn’t a total ashtanga newbie. Nor was I new to self-practicing, I started that early on simply because I couldn’t bear to go without practicing while I was traveling, then I liked it so much I kept it up over the years.

And while every part of my yoga journey has been a valuable source of growth and expansion, the last three years have brought a clarity and deeper sense of ease to my physical practice.

Anyone who has been doing sustained yoga practice over time knows that the practice bestows manifold benefits. We know that our bodies change, our capacity for tenacity increases, our minds get a little quieter, we experience more peace and joy, we become (even somewhat) less reactive and our relationships improve.

Our lives get better, so we keep practicing.

None of this is to romanticize practice, or to pretend there are times when it’s not really difficult to push through. I know there’ve been days when I’ve literally had to drag myself through primary series because I was so tired, when all I could do was surya namaskar and finishing poses, days I dreaded urdhva dhanurasana, when my back hurt and I thought I would never do kapotasana again.

We’ve all been there. I know I’ll be there again.

But on a deeper level, something is happening that can’t be quantified on a day-to-day basis. It’s a bit like when you’re trying to lose weight on the scales, if you weigh yourself everyday, it’s difficult to see progress, but if you do a weekly weigh-in, you’re much more likely to feel like something is happening.

In order to see change on the macro level, we have to let go of the micro sometimes.

But yet, yoga is all about attention to the micro, so we have a paradox on our hands. I guess it comes down to paying attention to details, bringing an attitude of care to all that we do, even things that seem trivial, while at the same relinquishing  attachment to the outcomes of our actions. It’s a beautiful and mysterious process. In trying to make sense of it the best that I can do is share experiences in my own life.

I think I have become more graceful at handling transitions because of my ashtanga practice. But this hasn’t happened overnight. Take jumping back and jumping through. It was about two years before I could do so with any modicum of ease and grace. It’s still far from perfect, but it’s much, much better—lighter, less awkward.

By slowing down in my practice, paying attention to subtleties and doing the same action repeatedly day in, day out, I became more skillful. I noticed that if I pressed more into the center of my palm when jumping back and forward, it was much easier. Obviously, given the amount of vinyasas in ashtanga,  this has affected my practice as a whole. More sukkha (ease), less dukkha (stress/difficulty).

What about transitions off the yoga mat?

It just so happens that I’m married to someone who travels frequently for work, so over the years I’ve had a lot of practice at navigating delicate transitions. Now I know that for a couple of days before it’s time to say goodbye, we’re both a bit more on edge and it’s easier for tempers to fray.  We’re both about to transition into a very different flow from the one we share together while he’s home: me into spending way more time alone, him into having almost no privacy and a grinding tour schedule. I know that in some ways we both dread the transition, but we’ll be fine once we’re into our new groove.

After several mishaps over the years, I’ve learned that the night before he leaves it’s much better not to make any plans, and not to be attached to how I want the evening to go. We’ll both be happier and the chance of harmony prevailing in our home is significantly higher. It’s important to tread softly, to be extra nice to each other and extra patient. It’s a delicate time, as we both prepare for a huge adjustment.

But coming together again is also a delicate transition. We’ve got much better at dealing with it now, but holy cow, it took a while! It used to go like this…me: so excited about him returning, can’t wait to spend time together and reignite the flame; him: happy to see me, but exhausted from the road and in desperate need of solitude. Not 100 percent the best recipe for harmony.

Now I’m much smarter. I know he’ll most likely need to decompress and the more space I give him, the more ease we both feel and the sooner things get back to ‘normal’—whatever that is!  Less dukkha, more sukkha. Thank you, jump backs! Pay attention to the transitions, they’re a threshold, a portal to something bigger.

Ashtanga yoga has taught me not to waste energy. I know what’s coming when I’m still on janu sirsasana C; I know that if I’m particularly tired that day and I want to leave the room feeling energized rather than depleted, I can better skip the vinyasa between sides. Tomorrow I’ll have more juice. Practice has made me wiser. I’ve also seen that if I get pissed every time someone cuts me off on the freeway, I really just create suffering for myself and cause a surge in stress chemicals through my system. Not the smartest thing to do. A total waste of energy.

The practice has made me softer, less serious about it all. I’ve found a sense of refuge, an understanding that it’s okay if I don’t do a full practice every time I come to the mat, the series will still be there tomorrow. And the next day. Nothing is going away. I have the rest of my life. And this sense of refuge, or sanctuary, in the practice has made me more relaxed about it, which has made me more relaxed about my teaching. I don’t have as much to prove anymore. Here it is. I hope you like it, but if you don’t, know that I’m doing my best and that’s as much as I can do. Furthermore, if you don’t ‘get’ a particular pose this time, don’t worry it’ll still be there for you next time you come onto your mat. Nothing is going away. Everything is here for the taking, or the trying. Aparigraha (unclutching). Now if I could just get the next damn pose! 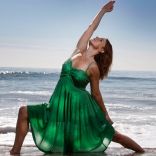