Ask Licia: Marriage Advice—Should I Stay or Should I Go?

I am in need of some marriage advice. Specifically: should I stay or should I go?

I’m asking because I truly do not know what to do and I’m not sure if I’m even thinking rationally at this point. I’ve been with my husband for seven years, married five years, I’m 42, he’s 44, no kids of our own, my stepdaughter is 21 years old, so she’s not in the mix as far as children being hurt over this.
I got together with my husband initially because he was smart, witty and funny. There wasn’t much of a physical attraction on my part but I was pretty much sick of dating self absorbed assholes who hurt me. Sooo, I think I just convinced myself that security and partnership was better than lust.
The upside of this for me was that my husband has zero interest in sex . . . therefore I don’t need to be worried about cheating on his part. His last two serious relationships broke up because he refused to be intimate with them at some point and they ended up bailing.
He told me this himself.
So here we are now . . . he’s still smart and witty but has become very controlling and negative. I’m basically living with a roommate at this point who is pissed off 24/7. Not at me personally, just at everything and everyone. What complicates matters is that my mother lives with us and we have a lot of pets that are loved beyond words that neither of us could bare to be separated from.
My husband thinks that we’ll grow old together and we were meant to be. I’m afraid of breaking his heart and I don’t know if he could financially deal without me. In fact, I know he couldn’t. My mother and I live in his house, I’m not on title, I just pay the mortgage and all utilities, all other bills, everything needed for the house which adds up to about three thousand dollars per month.
He works random small jobs and pretty much pays for his cell and car insurance. If I left, he would have to rent or sell the house and get an apartment somewhere.
Now here’s where all my doubt started recently and I know this is shitty on my part. Some friends on Facebook started a high school reunion chat and because of that a couple of guys from my past found me. One was my old boyfriend.
Chatting started and eventually we met up in person. I did not kiss him or do anything inappropriate but it was hard not to. I was honest with my husband about who I was meeting and of course he was pissed but I went anyway. The chats still continue and are sexually inappropriate for two people who are both married.
The other guy is someone who had a crush on me back then and is now feeling like he’s kind of falling in love all over again. He’s very romantic and makes me feel wanted I guess. I have not met him in person and most likely won’t. But I just started realizing that I miss being pursued, I miss sex, I miss romance, I miss lust and love, I miss late night chats and finding out more about one another, I just miss being single maybe?
Am I on a path of total destruction here? And if so, how do I approach my husband with the way I’m feeling if I want my marriage to work? I don’t know what to do anymore. I should add that we didn’t even have sex on our honeymoon. We have had sex one time in five and a half years and only because he had a moment of wanting to possibly have a kid.
I didn’t know that’s why he initiated sex until afterwards and I do not want any children.
Thanks,
Anna
***********
Dear Anna,
Thank you for your question.
There is nothing more difficult than the unraveling of a relationship. It comes in many forms and fashions but the end result is always the same: not being met or seen in union will most certainly undo even the most perfect of pairings.
Marriage is anchored on two foundations: sex and friendship. Both have an enormous amount of intimacy attached to them and when one, the other, or both are not being attended to we (as alive human beings) begin to get an itch.

An itch that cannot be reached to scratch.

A sense of pain from this itch that, while isn’t unbearable, is certain to drive us crazy.
This, Anna, is what I believe is happening to you.
I, too, have experienced this type of itch. It happened slowly at first but then heaved into a giant snowball of undoing that I could no longer control. I almost married the man that I was settling for and thought it better to do that than to have to keep searching for Mr. Right. I convinced myself that if I just kept up appearances of who I wanted us to be that would then carry me through the illusion that who I was becoming in this relationship could  be a self that I could maintain throughout all of my years.
I would have lived a life in a cage had I stayed. A cage in which my needs would not have been met and I would never have been allowed to be who I was.
So I walked. I called it off. I opened the door and I set myself free.
As soon as I said the words “I am leaving” I felt myself ignite. Transform. A reclamation of self—a self I had forgotten existed.
The itch was finally scratched.
So, Anna, my advice to you is this: acknowledge the beauty of what you once had with your husband. Be grateful for the memories that are good and lovely. Remember the times in which you smiled and shared and laughed and felt giddy. Acknowledge that while everything was not all bad it just isn’t what you need to survive. Leave the details to be handled as you move away from the relationship—as it most certainly will happen as it should.
You are not on a path of self destruction.
You are on a path to freedom.
Your husband is no longer meeting you right where you are—you are advancing as he remains stagnant.
Pull the plug, Anna, you deserve all the things that come with love.
You deserve sex and friendship.
xoxo,
Licia

Do you have a question needing answered? Looking for advice on love, relationships, family, spirituality, food or general curiosity? Send your questions to [email protected] 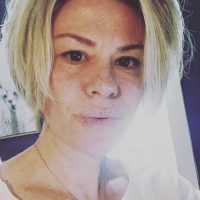