Juice is Bad for You. What if I said your juicing habit was ruining your teeth? Your health?

You’d say I was crazy.

Okay, let’s start with something obviously unhealthy for you: sugary cereals. Many of the major cereal brands I grew up with are reallllly sugary: 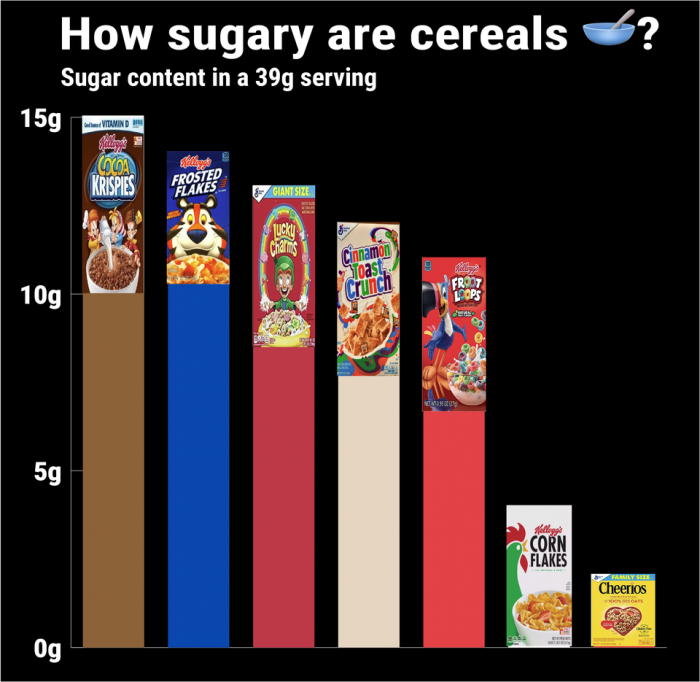 Okay. So, you wouldn’t pay $12 bucks for a cup of this stuff after yoga, would you, and call it healthy?

Impressed? Depressed? We haven’t even started.

People think juice is good for them. They’re wrong:

Oscar Wilde: “Everything in moderation, including moderation.”

Too much of a good thing, altered, can be bad for you. Juicing is pure sugar. Take out the fiber, the stuff nature gives us to slow us down and help us digest and stay strong, and we can down as much sugar as a can of coke in a bottle of juice. It’s like a drug.

“Blending is always superior to juicing, as blending maintains the complex fibers which made the fruit so beneficial in the first place.”

Bonus: Did you know? Tropicana OJ is owned by Pepsico and Simply Orange by Coca Cola. They strip the juice of oxygen for better storage, which strips the flavor. They then hire flavor and fragrance companies, who also formulate perfumes for Dior, to engineer flavor packs to add to the juice to make it “fresh.” (americannutritionassociation.org)

Number one most-read article on the New York Times? “Kale? Juicing? Trouble Ahead.”

In other news, the international yoga community has lapsed into a state of bewilderment, rage and deep sadness.

It’s an Opinion Article, not journalism. Nevertheless, it makes some wowza points. Read it in its entirety, here.

Imagine my shock, then, at my last physical, when my doctor told me I had hypothyroidism, common in women over 40. When I got home I looked up the condition on the Internet and found a list of foods to avoid. Kale, which I juiced every morning, tops the list, followed by broccoli, cauliflower, cabbage, Brussels sprouts and collard greens — the cruciferous vegetables I consumed in large quantities because they are thought to prevent cancer, which runs in my family. And flax — as in the seeds — high in omega 3’s, that I sprinkled on cereal and blended in strawberry almond milk smoothies. Also forbidden: almonds and strawberries, not to mention soy, peaches, peanuts, corn, radishes, rutabaga and spinach.

And then, as if my world was not sufficiently rocked, I went to the dentist, who said I had five cavities and asked if I snacked on candy and sodas all day long. I was insulted. Indignant. What did he take me for? No, I answered. I don’t eat sugar and drink only fresh vegetable juices — no longer kale, of course, but carrot and celery, which I’m still allowed. And filtered water with lemon.

“You’d be better off with chocolate and cola,” he said. Apparently the natural sugars in fruit and vegetable juices can cause decay, and lemon, though high in vitamin C and bioflavonoids which may prevent cancer, had eroded the enamel that protected my teeth.

I argued that I always brushed afterward. “Worst thing you can do,” he said….

Read the rest, it gets worse (smiley face emoticon).

My review: The ending ruined it for me. Seems reasonable, interesting, balanced…then, twinkies? I know it’s meant to be cute, but…yes, a lot of this is about moderation, common sense. Drink fruit sugar every day, lemons on your teeth, etc? Get smart. Doesn’t mean we have to give up real food for effing twinkies…which have beef in them (ingredient list here, it’s amazing).

I don’t care if folks want to eat disgusting yummy food, free country and all that. I just didn’t like that it turned her point from: “you can eat too much of a good thing, be mindful and smart” to “f*ck healthy food, I’m gonna eat crap after 30 years of leading the way” in the minds of many readers. It was a “cute”, weak writer’s moment.

Don’t believe the hype? Here’s a link for you (Just be mindful, in moderation!):

> Juicing, with a Blueprint.

*Update via The New York Times: “The glycemic index on [juice] is as bad as Coke. For eight ounces, there’s 14 grams of sugar. People get suckered into thinking, ‘Oh, I’m drinking this juice.’ Skip the juicing. Eat the fruit. Or eat the vegetable.” This + 11 other tips for living a longer life.