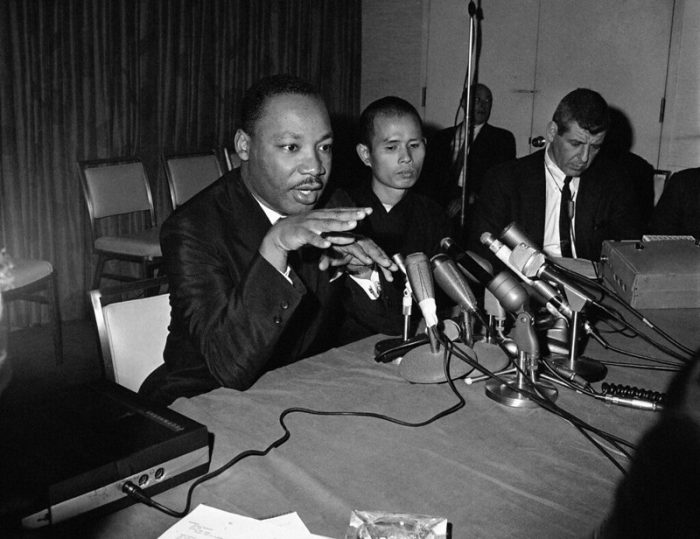 “In this world
Hate never yet dispelled hate.
Only love dispels hate.
This is the law,
Ancient and inexhaustible.”

I don’t think Martin Luther King Jr. was a Buddhist.

However, in his nonviolent activism, it was clear that he was inspired by Gandhi’s nonviolent resistance movement. He was also inspired by Buddhist teachers. His commitment to nonviolence is something that should be inspirational to all of us.

Peace, equality, love—these aren’t just Christian values or Buddhist values. These are human values that we should all cultivate for the well-being of everyone.

Everyone knows about Dr. King’s activism in the struggle for racial equality. He was also a peace activist. He strongly opposed the war in Vietnam—one of his speeches “Beyond Vietnam” is, to me, the most inspiring.

He befriended a young Zen monk who had been exiled from Vietnam and was involved in peace activism. His name was Thich Nhat Hanh. It isn’t really known exactly how much these two learned from each other, but we know that they spent some time together and they gave each other advice.

Dr. King wrote a letter to the Nobel Committee urging them to award the Nobel Peace Prize to Thich Nhat Hanh for his efforts at peace activism.

This would be a notably auspicious year for you to bestow your Prize on the Venerable Nhat Hanh. Here is an apostle of peace and non-violence, cruelly separated from his own people while they are oppressed by a vicious war which has grown to threaten the sanity and security of the entire world.

Because no honor is more respected than the Nobel Peace Prize, conferring the Prize on Nhat Hanh would itself be a most generous act of peace. It would remind all nations that men of good will stand ready to lead warring elements out of an abyss of hatred and destruction. It would re-awaken men to the teaching of beauty and love found in peace. It would help to revive hopes for a new order of justice and harmony.

I know Thich Nhat Hanh, and am privileged to call him my friend. Let me share with you some things I know about him.

You will find in this single human being an awesome range of abilities and interests.

He is a holy man, for he is humble and devout. He is a scholar of immense intellectual capacity. The author of ten published volumes, he is also a poet of superb clarity and human compassion. His academic discipline is the Philosophy of Religion, of which he is Professor at Van Hanh, the Buddhist University he helped found in Saigon. He directs the Institute for Social Studies at this University. This amazing man also is editor of Thien My, an influential Buddhist weekly publication. And he is Director of Youth for Social Service, a Vietnamese institution which trains young people for the peaceable rehabilitation of their country.

Thich Nhat Hanh today is virtually homeless and stateless. If he were to return to Vietnam, which he passionately wishes to do, his life would be in great peril. He is the victim of a particularly brutal exile because he proposes to carry his advocacy of peace to his own people. What a tragic commentary this is on the existing situation in Vietnam and those who perpetuate it.

The history of Vietnam is filled with chapters of exploitation by outside powers and corrupted men of wealth, until even now the Vietnamese are harshly ruled, ill-fed, poorly housed, and burdened by all the hardships and terrors of modern warfare.

Thich Nhat Hanh offers a way out of this nightmare, a solution acceptable to rational leaders. He has traveled the world, counseling statesmen, religious leaders, scholars and writers, and enlisting their support. His ideas for peace, if applied, would build a monument to ecumenism, to world brotherhood, to humanity.

I respectfully recommend to you that you invest his cause with the acknowledged grandeur of the Nobel Peace Prize of 1967. Thich Nhat Hanh would bear this honor with grace and humility.

Thich Nhat Hanh didn’t win the Nobel Prize that year—but, he’s been a tireless activist for spreading peace and love ever since.

There is no doubt in my mind that Thich Nhat Hanh and Dr. King were Bodhisattvas.

We can learn a lot from their examples.