Checking out the Whole Chakra Thing. 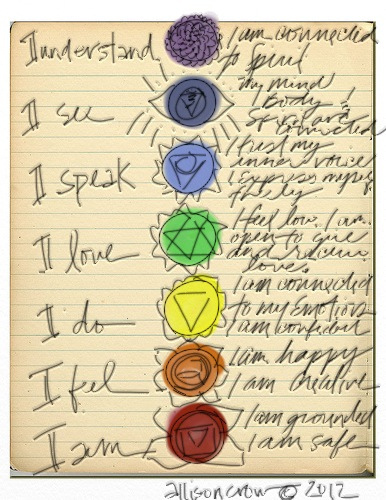 I’m out of whack.

I have strange aches and pains, I wake up panicky and I find myself avoiding showers, invitations and tasks that seem overwhelming.

There are legit reasons for this, but I’m actually more interested in making things better than I am at wallowing. (Although I have done plenty of wallowing.)

I have enough pharmaceuticals to sedate the population of a mid-sized psychiatric facility (mostly because I never take any of them), but that’s a temporary fix. A Xanax will put me out and smooth my anxiety for a few hours but then I’m wide awake and it’s all still there.

I want to be whole, not patched together with tranquilizers and trashy TV.

So I started thinking about holistic healing, specifically chakras. Chakras always seemed just east of nutty to me, except maybe as a way to address psyche-soma issues. I am not ready to concede that there are seven (or nine or 13) wheels spinning at various spots on my spine, or that there is a snake coiled somewhere below my jeans pockets waiting to spiral upwards and raise my consciousness.

I do not believe that my life will be changed by buying a bracelet with seven colored stones.

But you know, nothing else was working. I kept thinking about the chakras, about realigning, and balancing. About how maybe it’s no crazier than believing in Jesus or capitalism or psychotherapy, and about how often ancient wisdom gets the jump on modern science.

I had nothing to lose. If it worked I’d be better off and if it didn’t I’d probably have done more yoga and eaten healthier food for a while, and be better off. Win-win.

I already had a book, Wheels of Life by Anodea Judith, and I start reading it. Quickly, I became transfixed by the descriptions of each chakra, and what goes wrong when they’re blocked.

I saw myself in the description of a blocked “first,” or” root” chakra. When it is blocked one may have trouble with fear, anxiety and money. Physically, there may be pain in the lower back, depression, skin problems and lack of energy. Check, check, check…you get the picture.

The challenge to first chakra stability is fear, and I could vividly imagine the sword of fear slashing at the roots that tethered me to this life.

It looked like some of my higher chakras were also wonky, and I was ready to go after them, too, but when I watched a YouTube video the guy with the deep, melodic voice said to realign only one chakra at a time. He sounded trustworthy (and hot) and I decided to stick to the literal “root” of my problems.

By that point, I was totally, thoroughly in. And when I’m in, it’s not going to be some half-assed dabbling. I am not a celebrity with a red thread around her wrist, or a mala chosen to coordinate with my Dior Couture.

(Plus, I’m still a Buddhist. Although that’s complicated because there are Tibetan Buddhist chakras which are different from their Vedic counterparts, but I’ve already read a book and watched a video and I am just too lazy to do more research. If I had that kind of energy I wouldn’t be doing this in the first place).

I learned all the things associated with the root chakra, and got started. I began the day with a yoga routine focused on the sacral/root chakra, and it felt good, although there was no sort of “Shazam, my root chakra is aligned!” moment.

I’m supposed to be eating root vegetables, proteins and spices, so I breakfasted on peanut butter toast and made myself a lunch of roasted carrots, potatoes and cabbage with some spice-infused oil drizzled over them.

There are other things that feel sillier, but I’m doing them. The root chakra is all about the red, so I put on a garnet ring that belonged to my mother, made a braided bracelet from crimson yarn and wore a red T-shirt. I put a Ganesh next to my bed, along with a bloodstone and a smoky quartz. I burned oils of patchouli, sandalwood and cedar wood while I worked. I chanted “Lam, lam, lam, lam, lam,” hoping that no one would catch me and decide I’d totally succumbed to madness.

Right now, I am aware of my feet firmly rooted to the ground, the pull of gravity, the strength and stability of my lower body. I think of things that can connect me with the earth, with my roots and the roots of all things: re-potting some plants and starting seeds for spring, walking outside on the solid earth, and cooking turnips, parsnips and other things that grow down into the dirt and find their strength in the dark, dense ground.

I don’t know if this will “work,” or even what that would look like. I’d like to feel better. I’d like not to be afraid all the time, and unsure that I am entitled to take up space. I am entitled to be here, I am strong, and someplace deep inside of me I know all that. That knowledge just isn’t accessible to me now, my untethered self having been separated from all that is stable and rooted.

I’ll give it a month, I think. I’ll do the yoga, eat the roots and protein, chant the “Lam,” wear the red and burn the earthy oils even when my son tells me the house smells like a head shop.

At night, my last sight will be my Ganesh in a little red garland I made him. He will undoubtedly wonder why some Buddhist is staring at him over the top of her novel, and whether he is actually supposed to be helping her to overcome obstacles, or just keeping her company while she gets balanced.

Will you keep me company while I get balanced?

I’ll be back to tell you how it’s going. Next up is how music fits into this realignment gig…

What does your Body look like when it feels these 14 basic Emotions? [Image]

The Chakras as Explained to a Child. {Video}

Chakras: The Energy Within.