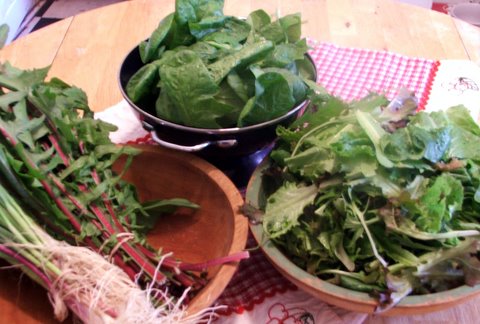 Sometimes, the universe throws something in my path with such persistence that I have to stop and take a good look.

First, I read that my state was one of two selected to participate in a pilot program allowing public schools to buy fresh food from local farms. This seems like a no-brainer, but in our district we have been banging our heads against this particular wall for years. Apparently this pilot started and ended in 2012 without being adopted.

We live in an area surrounded by farms growing and raising the freshest and best of everything, but continue to serve our children canned vegetables, Tater Tots and Chick’n Nuggets. (There was also a lame-ass attempt to make the meals healthier, which resulted largely in making the food inedible, a passionless, punitive assortment of badly conceived “healthy” food).

It is not the fault of the people preparing the food, or probably even those making purchasing decisions. The schools in Michigan are broke, struggling, and looking to save any possible penny. It is my fervent prayer that some day we can, as a state and eventually a nation, support local farms, keep our dollars here, and stop feeding our kids processed garbage at school that makes healthy fare seem unattractive at home.

Next, I read with interest the weekly menu of a woman whose stock-in-trade is finding deals on various things, and feeding her family of 5 for $100.00 a week. She is no fool, this woman, and I admire her zeal and ability to ferret out bargains.

On the other hand, the sample menu includes a meal at Kentucky Fried Chicken (she had a coupon), a pizza dinner and a hot dog dinner. I am no food Nazi and my own kid would be in ecstasy if that was our menu for the week.

On the other hand, my kid is also likely to eat a bowl of sugar snap peas or a pint of raspberries, or to whip up a smoothie with frozen banana and organic skim milk. Our family meals are almost always balanced and healthy, and the processed stuff is a treat, a small part of a pretty healthy whole.

What I understood, reading this woman’s sample menu, was that even for the best educated, most sophisticated parents, the easiest way to feed a family really economically is to buy what’s cheap, which is very often highly processed. If someone in the house is a good cook, with enough time to make good food from scratch, it is possible to make appealing meals using the broccoli, skinless chicken breasts and melon that are deeply discounted, but that’s a big “if.” That requires knowing how to put together something that is not only inexpensive and healthy, but tastes good enough to please the palate of kids jaded by Mickey D’s, cheese curls and Twinkies. It can absolutely be done, but it takes work, time, and mental energy.

The last thing was a news story about whether extremely obese children should be taken from their parents and put in foster care. My heart hurt reading the words of one mother who worked two jobs so that she and her son “wouldn’t have to live in the ghetto.” She had fed him fast food because it was what she had time to provide, and could afford.

I elaborated on my own—if they were that tight on money, it was possible that they lived in a place where it was not safe for him to run around outside burning calories, and if she was working two jobs and caring for a child, it would have been really hard for her to find time to go to the market, buy healthy food and then turn it into something her son would eat.

Imagine having barely enough money to make ends meet, exhaustion from two jobs, the demands of a growing child, and the prospect of whipping up some chicken sautéed in olive oil, microwaved carrots and whole grain pilaf for dinner. Call it a failure of energy, imagination, resources or will, but it is legion in this country.

It seems odd that we can’t make it easier for people to feed their children well rather than allowing things to fall apart and taking children from their parents to save their lives.

Somewhere between the parents refuse to allow a bite of birthday cake, and those who mindlessly feed their children fast food and candy, there must be a happy medium. Unfortunately, I think that legislating that “medium” is currently impractical, and would infringe upon the civil liberties of food manufacturers, advertisers, school districts, and a disproportionate number of families living below the poverty line.

I have no answers, but I will say this pathetically hopeful thing: it’s possible to make healthy food taste good, and it’s not even really that hard.

At my job, I have cooked “fresh and local” for a pretty good cross section of people. They have eaten up every shred of marinated, grilled asparagus and zucchini, and bowls full of marinated vegetable salad. They have said things like “I usually hate squash, but…” and “I only took that salad because my mom made me, but I really liked it.” The produce they are eating is in season, dirt cheap, and takes maybe 5 minutes to prep and 10 to cook. It can be done.

Now, how do we do it in our public schools and our own homes so that our children are healthy, thriving people who can appreciate a fresh, earthy carrot as well as a cup of Dairy Queen? How do we do it without going broke? How do we encourage families to make healthy changes without patronizing them, threatening them or holding ourselves out as superior pushers of quinoa and cabbage?

If I could figure this out I would put on my green cape and go.