How to Get to Know an Elephant. ~ Christine McDonald 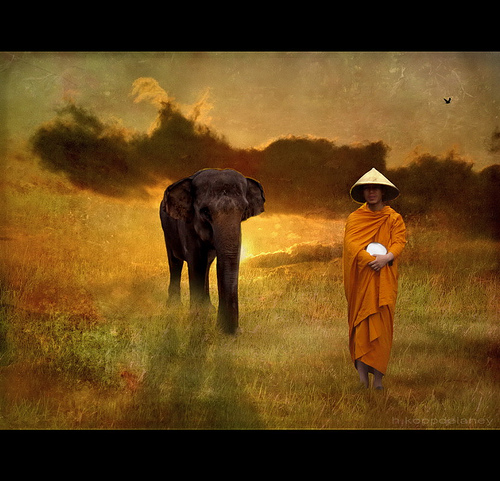 The top of the elephant’s head drew me inward as I become aware of the large fan like ears.

First one ear, and then the other, moving in a rhythmic fashion, cooling a massive body on a warm Savannah day. Sensing the stillness of the elephant settles my own body and allows me to connect even more deeply with the elephant body.

As we merge together, I sense the indentations behind the ears, and became aware of the muscles moving the ears. The eyes unencumbered by the dust and dryness in the air feel soft and open. A focused awareness of the rich earthy colors of the land has a whole body feel to it, as if the elephant’s body and the land are inseparable.

The elephant arose in my consciousness as I researched the plight of the elephants. I spent hours on numerous websites reading news stories about the poaching of elephants, the demand for ivory, and the brutal assault of these animals in the name of ignorance, poverty and greed. It was disturbing to think of what was happening to these majestic beings and even more disturbing to think they may not be with us if the present rate of poaching continues.

As challenging as it was, doing the research opened something up in me.

The elephant’s vulnerability and my own seemed to merge as I realized the extinction of elephants may happen in my lifetime. As I got to know this elephant more, I sensed she was a younger and smaller female in the herd. I could feel her love for the Earth, her connection to her family, and a bigger cosmic connection with humanity. I found her company very grounding and comforting despite our meeting in vulnerability.

Getting through the many news articles archived on the Save the Elephant website was challenging. Some of the news articles showed graphic images of the tusks of elephants removed with chainsaws. Others showed skeletons of elephants littering elephant trails. Friends or family of a deceased elephant were photographed mourning their passing. Caressing or cradling the bones with their long flexible trunks, like a mother might hold a child. I had an uncomfortable feeling in my gut that left me restless and uneasy. A walk in the fresh Oregon air did not help. The scattered windfall of tree limbs and branches reminded me of elephant skeletons littering the African landscape.

As I read more, I pondered what dire circumstances exist in Africa and India to create such an ugly drama resulting in over 30,000- 40,000 elephants poached every year, and another 10,000 dying as a result of orphaned and abandoned young, and loss of herd structure. The hardest hit areas are in central Africa, where the African Forest Elephant, a smaller subspecies of the African elephant, have plummeted 76 percent in the last decade.

In Asia, habitat destruction and poaching of the male elephants for their tusks has made the Asian elephant almost extinct. Only 800 bull elephants remain of the 20,000 Asian elephants in India. Their numbers and the genetic viability of healthy herds are dwindling every year as more elephants are poached or killed.

For several days, I felt “my” elephant nearby.

If I was questioning the connection, I could find her by parting the veils of consciousness, like layers of curtains. We shared a bond that went beyond the miles that separate us or our differences in appearance. Oddly, elephants and humans have much in common, even though genetically we are extremely different. We share our warm blood, our communal societies, the length of our lives, our ability to remember and learn, and to shed tears and express grief in response to death. In many ways the elephant trunk is even more versatile than the human hand.

It is capable of lifting weights exceeding a thousand pounds and can pick up and discern between objects one tenth of an inch in diameter. Like humans, the brains of an elephant child are not fully developed at birth and require their dependence on their elders and a complex social structure to mature.

Science is finding the unique adaptations of an elephant’s body have significance in the way elephants communicate. In my research, I learned an elephant’s cushiony feet, have seismic sensors in them capable of detecting elephants twenty miles away. They use their large front toenails to tap against the surface of the Earth to send information in some Morse code like signal. I had to wonder if my ability to communicate with animals on the inner planes opened me up to this seismic earth connection the elephants communicate through. Connecting to “my” elephant felt easy, familiar and mysterious.

Elephants have a mystical quality in the origins of human-kind. Indigenous tribes in South Africa believe man followed elephants out of Africa. Remnants of large hairy elephants to small compact ones have been found on nearly every continent. Ganesh, an elephant headed God, is revered in Hinduism as the remover of obstacles and Saumanesa is depicted as an elephant bearing the earth on their shoulders. Buddha was known to tame wild elephants and is believed to be one of his reincarnations.

Lyall Watson brings to life the mythic qualities of elephants in his book, Elephantoms, and describes elephant like ghosts he encountered in the wilds of South Africa as a child. My research left me wanting to know more about these ancient guardians of the Earth, and wondering if the only connection we may have with elephants in the future is through the mystical realms.

I cannot imagine a world where elephants no longer exist in the wild. While research may continue on their unique adaptations and physical characteristics, they are poorly understood as spiritual or mystical beings. I believe, they have a sacred function that is yet to be revealed to humanity and it may take the opening of the global heart before we will know their higher purpose. They are more like us than not, despite our differences, and if we stand by and allow them to become extinct we will have missed an opportunity.

What Can We Do:

Elephants have a huge presence that can radiate for miles if not across continents. Connect with them in whatever way you are called too.

Meditate on the images of elephants and ask to be connected to them through the inner planes. Call on Ganesha, the elephant God, for support in removing obstacles. Read more about overcoming doubt that humans can communicate with animals by going to my blog at Animals-in-Spirit.

“The first man said the elephant is like us, like our brother, and we have to live together, not hunt elephant. That’s what we say we were told at the beginning. That’s what we still believe. The elephant has always been, and will always be, special to us. This is why we protect it now.”

Want to learn more? Read on:

The Secret Lives of Elephants: Caitlin O’Connell-Rodwell at TEDxStanford

Paula Kahumbu: The power of a crisis story to create change

2013 The Senior Reflection: Patrick Freeman “A New Voice for Elephants.”