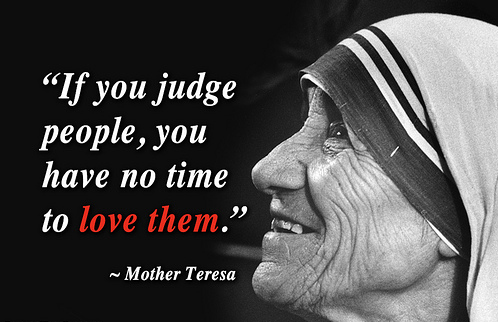 I’ve judged people my whole life. I am now a recovering judge.

My family of origin, although lefty and socially activist, taught me to judge based on intellect, class, politics and worldliness. There was a double standard: we were not ever, ever to judge people who, for whatever reason, could not help using poor grammar, wearing mismatched clothes or smoking in a car with their babies.

To those people, we were to show compassion and extend a helping (if somewhat patronizing) hand.

If, however, the offender was a person with the means and opportunity to do better…all bets were off. Bad grammar, bad manners, tacky art, wanting to eat at a McDonalds in Paris—all of these were judge-able offenses.

I also went to school in a public district that could have been Andover or New Trier. “They” were slender, privileged, college-bound white kids with Docksiders. I was fat, frizzy, unathletic and eccentric. I was teased, and somehow (Stockholm Syndrome?) internalized all of their standards.

I judged as they did, based on looks, clothing, and popularity. I judged myself harshly and brutally, and after high school I became something of a comic sniper about bad clothing choices, bad hair, visible fat rolls and other things that deflected my deep terror about being exactly the same as those I judged.

Coup de gras: I hung out at college among very socially active, progressive, cynical people who organized protests, majored in studio art and generally viewed most of the American public with a scathing mixture of disdain and pity. Jocks were stupid. The military was fascist, Republicans were stupid, all businesses were unethical, the American consumer was stupid, religious people were delusional and basically anyone not listening to The Butthole Surfers and creating giant installations of nuclear warheads made out of plastic milk jugs was hopeless and useless.

There were not many acceptable people left.

So for many years I was just one cynical, judge-y, miserable person. Sometimes judging made me feel self-righteous, sometimes it made people laugh, and it always made me feel like I was a little safer from being judged just by virtue of getting the jump. It was pretty sick.

When I decided to stop judging, withdrawal was painful.

My practice taught me that we were all part of a whole, and that no one is any better or worse than anyone else.

I also saw that directing genuine compassion towards the “other” makes it much harder for there to be an “other.” Easy to understand, harder to do.

I worked on not judging people by their geography, their religion, their political affiliation, their TV watching habits, the way they raised their children, their prejudices, or their education. A thousand times a day I bit back comments and corrected thoughts.

I had defined myself by my judgments, by what was “bad” and “good.” I also lived in a social milieu in which certain judgments were so routinely accepted that my refusal to participate was not well-received. Telling folks I would not mock Sarah Palin because she was a human being did not go over well. (Explaining the difference between social action motivated by a desire for justice and attacking a person based on her public mistakes didn’t help.)

I was told that I was “too nice.” A friend started calling me “St. Ann.” I tried, I slipped up, and I tried again, It’s an ongoing process in a culture of division, preference, judgment and separation.

The biggest problem for me, still, is when other people are judgmental. Often, these people are my friends or family.

Months ago, I received an e-mail from one of my volunteers warning me that a Certain Person was going to want to volunteer for me. She listed all the reasons that it wasn’t a good idea.

It was pretty incredibly judgy, and I was flummoxed. Not because I wasn’t going to let the new person volunteer, but because I didn’t know how to respond to the purportedly helpful “warning.” Should I ignore it? Speak up and say I didn’t like that kind of thing?

I asked a wise friend who said this: if you judge her for her behavior, you are judging. Don’t encourage it, and don’t participate. Show her by your example that you are not going to perpetuate a “good us” and “bad them” mentality in this fragmented world. So I did that. And it was okay.

And I wish I could say “and we all lived happily ever after in a big circle singing Kumbaya,” but of course that didn’t happen. I still make judgments reflexively, but I try to catch myself judging the second I’m conscious of it, to stop myself before the words “how could anybody….” pass my lips. I do not always succeed.

I decide, on a case-by-case basis how to respond when other people are judging. If it’s someone who knows me well, they usually understand if I don’t participate. If not, it’s not for me to correct anyone. I do not always succeed in either scenario. This week I have been saddened and sickened by the rush to judge celebrities, people we don’t even know, people who are (or were) fellow human beings.

I still get drawn into gossip, although less often. I still look in the mirror and think “blech!” I think harsh thoughts about people who leave dogs in cars on hot days. (To be clear: some actions are objectively “bad.” Hating and judging the actor, however, doesn’t help. The call is not to judge, but to fix what’s wrong).

I am trying to untangle and disarm a wiring system that took decades to build. We all are, although mileage may vary.

Maybe the best we can do is be aware of judging, watch for it, and challenge ourselves on every single thought that creates division based on our internal sense of “good” and “bad.”

That includes judging the people who judge.

That includes judging ourselves.