Listening to Our Hearts & Not Our Heads. 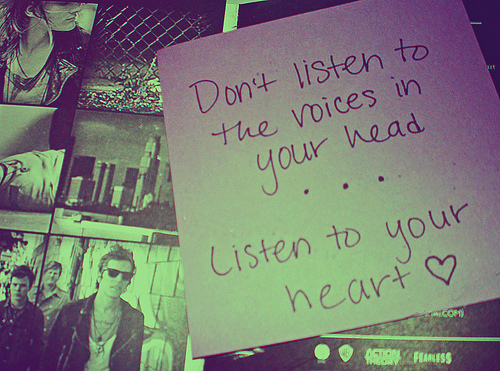 How many times have we answered “outgoing” or “team player” or that we love our jobs too much or that we’re perfectionists? Guilty! I’ve used a few of those! I started thinking though, about the qualities within myself that I love and the ones that I don’t.

How great it would be to be flat out honest when asked about my qualities and say, “Well, I follow my heart.”

I assume I would be met with blank faces, wondering what the heck I was talking about. So typically, I fumble my way through the answer, thinking of something to say that they have likely heard a million times before.

I love that I follow my heart but I also hate that I do so because it can really cause life to be difficult sometimes—it would be easier to follow my head. But I have always listened to my heart, my inner guide, and that’s how it’s always been for as long as I can remember. When finding myself in a situation where my heart and mind were telling me completely different things, I’ve always followed that gut feeling.

I’ve wondered for years why I did the opposite of what others were doing. Why did I always have to listen to my inner guide? Why couldn’t I just go with the status quo? It was frustrating to follow a voice that no one else could hear and to figure out a clearer way of explaining, “I just have to follow my heart.” The crafty answers I would have to think up to make sense to those who didn’t understand “heart” stuff resulted in a lot of eye rolling.

If someone asks me why I’m doing something that doesn’t quite make sense, I tell them that I’m following my heart and they usually just tilt their heads, mumble “humph,” and then we move on.

When I met my husband, it was within a short time that we moved in with one another, got married and had our first child and wow, that was some heavy “follow my heart” stuff.

We met in November of 2011 but it wasn’t until that following March that we actually started dating. Before March, there were random emails and Facebook notes to one another, but they were few and far between. Then in the beginning of March 2012 we decided to meet for lunch and there was an instant connection…Poof!

From there, our relationship and lives snowballed into something bigger and better than I could have ever imagined. People talk about being infatuated—seeing rainbows, hearts and all things “lovey-dovey” for the first while in a relationship. For some, if they aren’t careful, they can get caught up in this and make decisions through the rose-colored glasses they are wearing that they later regret. For us though, it was different.

We loved one another yes, but there was a connection that was instantly established on a much deeper level.

Three months after starting a relationship with one another we decided to move in together. And during that time we discussed things like marriage and children. During those three months I kept asking myself, “Is this going too fast? Should we be moving in together? What will people think? What will my family think? Am I making the correct, smart, decision?”

Everything in my heart told me that it was right, that I was following the exact path that I was meant to be walking and that it wasn’t just infatuation, but true, genuine love.

My head though, was telling me something different.

I got wrapped up in what others would think, that things were moving too fast. They would think that I was making a mistake and being careless, or not thinking things through. “Of course it’s too fast!” my mind would tell me. The inner struggle was almost too much to bear and so a week before we were meant to move in together, I went out and signed a lease for my own apartment, handing over the deposit and all.

I struggled with this though. It didn’t feel right and I was so torn. I kept asking myself, “Am I making the right decision? Am I making the right decision?” Not knowing I had been out to look for my own place and not realizing the extent of my internal struggle, my partner needed to be brought up to speed. He and I had a discussion a few days after I signed the lease and I had told him what I had done.

We met one day at lunch and had a serious, heart-to-heart discussion. He told me what he wanted. He told me he loved me but he also told me we needed to be on the same page in order for the relationship to work in a healthy way.

Something about his words flipped a switch in me and I told him that he was absolutely right. We needed to be on the same page and I was, in fact, on the same page! I had become so consumed in what others would think that I let the fear take over.

In that moment the weight of the world was lifted and love and clarity flowed through me.

It felt right. It felt so right. Almost two years later, I look at him and our daughter and thank myself for listening to my inner guide and having the faith and trust that everything was happening just as it was meant to.

It is so easy to get caught up in fear and ego and resist that which is meant to happen naturally.

It feels safer sometimes to ride in fear and play it safe. The more we listen to our hearts and the more we get familiar with its language and its feeling, the clearer those difficult decisions or situations will become. I believe it all comes back to having faith in the universe.

Know that the universe is always conspiring in your favour, even though it sometimes doesn’t seem that way.

And, when what you think and what you feel does not align, sit back and observe where your thoughts go and how it makes you feel inside. Always do what feels right in your heart.

Learn the language of your heart and a whole new world will open up to you. 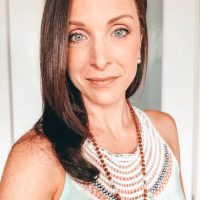 Meg Casten is a heart-based business & mindset mentor, writer, podcast host, and spiritual authority here to support you on your journey! As a professionally certified coa… Read full bio