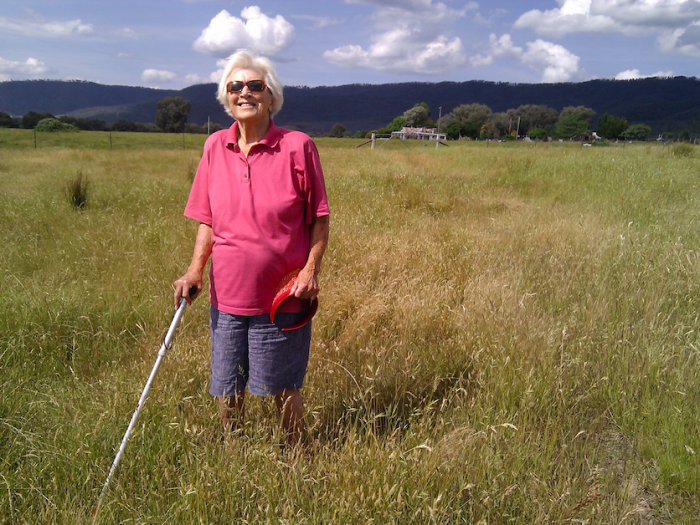 I’ve been dreading those words my entire life. She wasn’t just my grandmother; she was my best friend, confidante, teacher and inspiration. She was a warm embrace, a smiling face and countless days spent chatting over a pot of tea.

As the grief slowly grows into acceptance, I realize what her death is teaching me about life:

I have dreaded the death of my dear grandma for as long as I can remember. So much so, I thought my life might just stop with hers. When Dad gave me the news over the telephone I felt the bottom drop out of my world and tears well in my eyes. But my life didn’t stop. Instead my heart ached, my intense emotions told me I was still alive, and my five year old patted me on the shoulder and handed me a tissue. The truth is, love does hurt. But while the hurt fades, love never does.

Holding on tight to anything (people, possessions, ideas) leaves us vulnerable. To loss, grief, misery, despair and depression. I’d always struggled with the idea of non-attachment, a central tenet of most major world philosophies including Buddhism, Hinduism, Islam, Christianity, Taoism and Jainism. It seemed cold and harsh, the very opposite of love.

But in the wake of my grandmother’s death I have begun to truly understand this concept. Even though I held on tight, she left anyway. At first it hurt so much I didn’t want to talk about it, sure as hell didn’t want to write about it, and definitely didn’t want to splash my grief around the web.

And now here I am wanting to talk, write and share. What changed? The acceptance of transience. And what allowed this acceptance? A growing feeling of detachment. Although I can no longer love her as flesh and bone, I can still love her as a being, idea, memory as much as ever. What’s changed is I’ve let go. And the surprising thing is, rather than feeling an emptiness, as though I’ve released a beautiful balloon that’s floating out of sight on the breeze, I feel as though I’ve stopped holding my breath and all of a sudden I’m flooded with peace, air and a feeling of fullness.

Almost every ancient scripture, modern philosopher, personal development guru, wealth coach and health coach preaches the importance of presence. Eckhart Tolle infamously refers to it as The Power of Now; the power of being in the present moment.

This seemingly simple concept is in practice extremely difficult to master. Not because it is complex, but because it takes present moment awareness to master it, and most of the time we are either ruminating on the past or fantasizing about the future—rarely in the moment.

Losing a loved one brings a finite ending to any future moments. Instead what we are left with are memories and often regrets of moments taken for granted. Everyone is transient, just passing through.

What losing my Grandma has taught me is to be absorbed in each moment and appreciate the now because that’s all there is.

I always thought if I’d become an actor and needed to cry on cue, I would just need to think about my grandma dying and that would do it. I dreaded and feared her death. On one level, I knew it was coming, but I always deferred it to some future time that I didn’t need to deal with right now.

When the day came it was sad, tragic, raw and depressing. I felt a big loss and mentally grabbed at memories, trying to bring them into the present and make her alive again.

But quietly, at first imperceptibly, a realization began to dawn. The death of my Grandma had been one of the most tragic things I could imagine in my life. It had happened, and yes I was sad, but I was still okay—accepting even.

Facing fears, especially of the loss of loved ones brings a freedom, and a realization that it’s not the actual event that we fear so much as the anticipation of fear. Once we confront that fear, we are free. Of course there is still grief, but that’s an emotion we can process in the present moment, not an anticipated feeling existing only in the future.

Death teaches us some big life lessons, brings lofty philosophical concepts into the grasp of everyday understanding, and there is a mountain of gratitude to be felt for that. But each person that passes through our lives gifts us with a library full of things to be grateful for. All we need to do is be present enough to appreciate them in the moment, then publish, bind and catalogue them in the shelves of our memories, there for us anytime.

I’m grateful that my grandma always stood at the gate and waved goodbye to me until she couldn’t see me anymore.

That she taught me how to cook—with lots of sugar, butter and a simple bone-handled knife.

I’m grateful that she would mix up egg white and sugar for meringues or macaroons and let me eat it straight from the bowl before it ever made it to the oven.

I’m grateful she always sided with me, even when I didn’t deserve it. Having someone always supporting us is one of life’s marvels.

I’m grateful she was such a good listener. She could talk the legs off a chair and find common ground with anyone, but what made her so special was her ability to listen, and make you feel truly ‘heard’.

I’m grateful for her occasional swearing… ‘Bloody’, ‘blasted’ and once even a ‘wanker, darling’ said with her private girls’ school inflection.

Unexpectedly, I am grateful for her quiet, dignified death. Her heart simply stopped in her sleep, and with that she was gone. That day she’d told my aunty she was ‘buggered’. She’d lost her parents, her husband and all her siblings. She was almost completely blind and was on an increasingly large cocktail of prescription pharmaceuticals. She’d often say to me she hoped she didn’t last too much longer.

So although I selfishly wanted her to go on, she was done, and isn’t it the height of grace and wisdom to know when enough is enough.