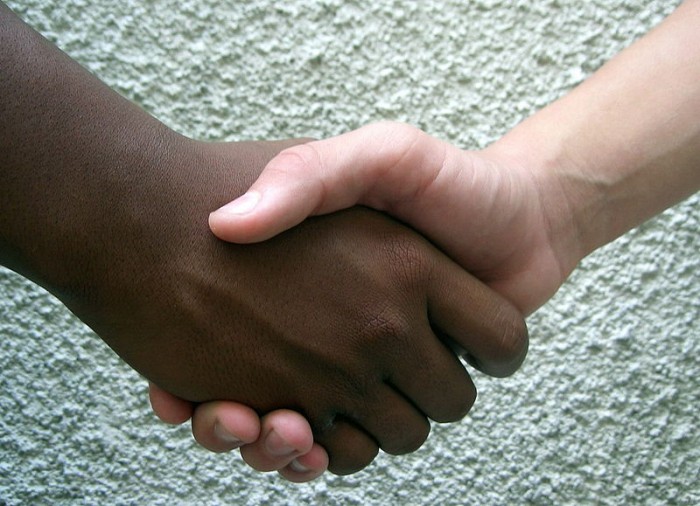 There he was, sitting across from me.

He wanted to understand—I just didn’t know what to say. Because I knew it’d be lost in translation, not across cultural lines.

It’s the year 2014—racism is still present but not as rampant. Many people are very aware that blacks are no longer inferior to whites in any way. That we are capable of the greatest achievements…the most prestigious feats…but I think this 2014 world may have focused so much on emancipating the blacks that it has ignored one important thing: to be black is still fundamentally different from being white.

This defies explanation, so we live our lives being only 50 percent black in order to be understood.

Yes, we exist in many countries spotted across the world. But I still think there is a thing as ‘black speak’—a word I use to refer to black language, black charisma, black understandings.

For instance, it has struck me every time that upon first meeting any fellow black student from a country across the world from my own little Caribbean island so much is understood in what is not said. So much sameness.

A sameness I do not often share with the whites I have met throughout my life journey, both in my own country and in this foreign land.

So much is misinterpreted. So much is left not understood. What can explain this? Am I racist? I really do not think so.

There is this psychological theory that states that we have this knowledge that is passed down from our ancestors. A knowledge that from birth courses through our brains. Can it be that this knowledge may differ based on our race? Can this be what leads to ‘black speak’?

Well, my story begins mainly in the last couple years when I was thrust into this white upper-class university and attempted to no longer be living in that 50 percent.

Part of black speak is being open…aware and open about your feelings. And I did this. It had been four years of being here, and black people were rarer than an honest politician. So maybe that was why I had used black speak in my interaction with the whites. I spoke. I confided. I talked about major issues like God and faith, about hot topics like homosexuality and abortion. I made the jokes. I had the charisma. Let the passion flow through me. I had never felt more alive. I had let the walls holding my blackness in burst and had come alive with ‘black speak’…I had allowed myself to be fully black.

It took only one or two months of this for it to start: the ostracism.

I became the black sheep (pun intended). The looks I got. The discomfort that billowed off of others when I merely entered the room.

I was painfully aware that I was no longer welcomed. Because I had crossed the divide. I had let my blackness show. I was no longer the emancipated and civilised type of black they were accustomed to.

I was a different kind of black. One they could not understand.

This speedy fall from grace. How could this happen? How could there be a certain amount of black that was socially acceptable and another amount that was not to be brought into the light? I couldn’t help thinking.

Now I know that there is this theory already around whereby they call some blacks ‘Oreos’…you know white on the inside even though they are black on the outside. Now this term has been badly used. They call ‘Oreos’ educated black people who don’t speak slang and are not huge fans of hip hop and rap. I do not think that there are innately black types of music or black ways of talking.

But I do think that there are ‘Oreos’. There are some of us blacks who dislike being black. Well maybe dislike is the wrong word. We shun the feeling of being black…we shun the ‘black speak’. What does that involve? Well, we survive by preventing ourselves by becoming too connected with anything that is passionate, open and aware. We become shadows of who we are born to be, only halfway present in our bodies. Craving instead to be never to be too…well, too black.

I think that within this 2014 world, we have not yet recognised that emancipating blacks is much more than becoming equally educated…it is about coming to terms with and accepting our blackness…our black speak. The sad thing is when you come to terms with it, there is no going back. You will no longer be able to be the 2014-type black…the 50 percent black.

Maybe I am just innately aware that he would never be able to understand? Because what I said would be lost in translation not across cultural lines.

Not because of different languages. No, it wasn’t that easy. It was because of deeper divides.

It was because he was white. And I…I was black.