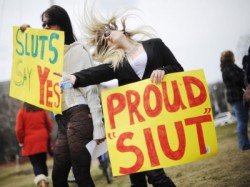 “The word and works of God are quite clear, that women were made either to be wives or prostitutes.” ~ Martin Luther

I recently wrote a post about virginity and quickly realized that being a virgin cannot be reclaimed unless we also face our relationship to its (seeming) opposite—the prostitute. More specifically, examining the virgin (or Madonna) and whore split that occurs in many of our psyches.

Although both men and women can fall prey to the virgin and whore dichotomy, it happens more frequently with women. We are damned if we do and damned if we don’t. Women are praised for pureness and chastity, while society shuns and outcasts the profane prostitute. Slut shaming runs rampant in our culture and the words whore and prostitute are most frequently used as insults rather than to actually describe the act of sex for hire.

However, the words didn’t used to mean what they do today. Pardon me while I nerd out with the OED (Oxford English Dictionary). The word whore comes from Proto-Germanic word khoraz, meaning “one who desires.” Even more interesting is that khoraz evolved from kama meaning “love” and named after   the Hindu god of love. (Kama Sutra, anyone?) So, in actuality whore evolved from the Sanskrit word for love and yet we use it now for a woman who seems to love too much or indiscriminately.

The word prostitute is more etymologically difficult to understand. It derives from Latin prostituere from pro, meaning “before or forward” and statuere, meaning “to cause to stand, establish.” The etymology doesn’t suggest sex for hire, but possibly a woman who was too forward in establishing her desires.

Etymologically, the words prostitute and whore don’t imply an answer for this split—in fact, quite the opposite. And yet, even though I notice this split exists, I find myself participating unconsciously.

I have wanted to appear virtuous to be liked by a man. I have used sexuality as a way of getting what I want, and I have looked down on prostitutes. I am not perfect; I split others and myself into these categories. I want to feel sexier and then dread the attention and catcalls—believing I couldn’t be sexy and myself at the same time. I have lost interest in a man after I found out they had sex with someone I knew, therefore putting them in the bad boy—or whore—category and not someone who would make a suitable husband.

Here are some other examples of the virgin and whore split that sheds more light on our thinking:

Talking about a woman or man as someone we would like to hook up with, but because they (insert reason about sex here), we wouldn’t want to date them.

Putting a woman or a man on a pedestal as someone we worship, but couldn’t imagine having a sexual relationship with (this idealization is also a psychological complex, read about it here). In this way they are virginal and that sexuality of any sort would somehow ruin them.

Sigmund Freud identified the Madonna-Whore complex in his clinical work as understanding that most men want to marry women like their mothers. This image gets projected onto women as the Virgin/Madonna assumption that we should be an object of worship for women to aspire to. In this model, a man does not want his wife or girlfriend to possess any traits of sexuality outside of the norm.

Examples would be women who are good at heart and also somewhat passive (I definitely include myself in this category): cute, clumsy girl, asexual or neutral, the High Queen (such as Elizabeth the I), the good girl.

According to Freud, if a man had a cold, uncaring mother, he would instead crave attention from a woman who is more sexually available—the whore. This woman is driven by sexuality and desire and therefore we often assume she is lacking in morality. She has massive sex appeal, but a man has animosity towards her as he feels helpless in the face of her powers of seduction.

The distinguishing of women as either sluts or virgins signifies an important wound in the collective unconscious. It reveals to us the compartmentalizing of sexuality and spirituality as if they are somehow incompatible.

I find it no mistake that the women associated most frequently with Jesus—the Virgin Mary and Mary Magdelene—share the same name. This could be a hint at acknowledging that every woman (and man) has characteristics of both the virgin and the whore.

The good girl probably also wants to have sex, and the bad girl could also be a nurturing mother and wife. It’s just more fun for everyone when women don’t have to be one or the other.