How I Crushed My Addiction. 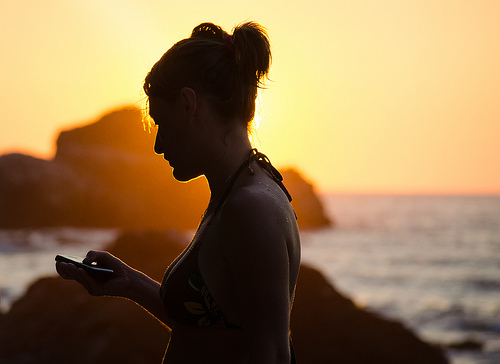 It all started when I found myself in the embrace of Jack Frost; he cast his winter blues spell upon me.

No matter how hard I resisted, he sunk his teeth into my soul and tore out the happy parts.

At least it/he hit me later than usual this year. Small consolation.

I was barely treading chilled water when my son encouraged me to play a game of Candy Crush. I refused. I find games to be a time-waster. There’s an entire world out there that needs to be saved!

“Come on. Try it. Just once,” he urged. Drug dealer in the making? Let’s hope not. I think he just wanted to witness his mommy doing something from his world and far-flung from my usual mode of productivity. 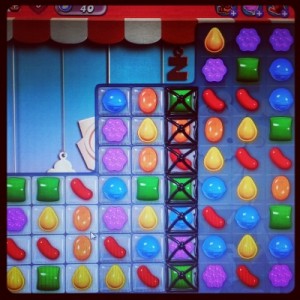 So I tried it.

The video game swallowed me up.

I think it knew that I—a woman who chides her husband for playing games on his phone when we’re supposed to be having a conversation or when he could be saving humanity on his off hours, which are admittedly pretty limited—was vulnerable. Feeling defeated by the harsh winter weather, how could I not get sucked into the games’ electrifying colors and challenge of lining up three or more candies for points?

Candy Crush is “the mobile game that’s so addictive, players say they have left their children stranded at school, abandoned housework and even injured themselves as they try to reach new levels of the game,” according to Time Magazine’s recent article, “‘Candy Crush’: The Science Behind Our Addiction.”

Part of the appeal, according to the article, is the fact that the game makes you wait. You get five chances (lives) to move onto the next level. Once you run out of those lives, a clock pops up and you have to wait about fifteen to twenty minutes for a new set of lives. That results in craving. The game gets the endorphins going—providing a false sense of escape from the blues—and then boom. Over.

But all is not lost. The game is hooked into Facebook and you can ask friends for extra lives (as long as they play, too) free of charge. Invite unwitting, not-yet-addicted-to-Candy-Crush friends to play and, if they do, you earn even more extra lives. Fellow Candy Crush junkies came out of the woodwork like discombobulated termites. It was a daily gaming enabling fest. Playing became habitual and I became further entrenched in the vibrant alternative dimension.

Fact: Enough people choose to pay for lives and extra moves that Candy Crush makes over $800,000 a day!

Why, of all things, did I get addicted to a game? I suppose it’s better than meth or heroine (or is it?). I smoked socially in high school and college—in fact, I once smoked an entire pack within a couple of hours when a boyfriend didn’t call me on Valentine’s Day—and never became a cigarette addict. I’ve had sex and I’m not a sex addict (although I know someone who wishes I was). Why oh why was this happening to me?

I wrote on my Facebook page that I was considering Candy Crushing my way through winter and then… Spring! A Facebook friend (someone I had only met a couple times at a neighbor’s party) commented that I should instead treat myself to a day at her new organic spa.

That could certainly break up any bleak, cold week. And when do I ever treat myself to anything?

Another friend told me I was better than Candy Crush.

The addiction got so bad that when I closed my eyes, I’d see the candies.

I played the game in my dreams! I’d postpone answering my son, telling him I had to concentrate on the game. He and my husband tormented me about my obsession and I admitted I had a problem. When I started seeing candy color patterns in real life—on people’s faces—I freaked out. I knew I had to get it under control.

Ten days into my kooky gaming enslavement, I decided I could play Candy Crush for 30 minutes to an hour a day (yes, I was playing more than this apparently) but only as a reward for completing a few things on my list. Genius! A reward system! At first, I was getting a lot done so I could play. My productivity soared.

But it was short-lived and I was back to playing more.

I resolved to go cold turkey.

It was the only way to crush The Crush. But not before one final all day binge (minus the time I had to wait for new lives).

When the day was over, I deleted the game from my phone. That was a couple weeks ago and I will never look at it again. Although I’ve been tempted.

Want to know if you’re addicted to Candy Crush? Take the quiz.

I kept receiving extra life requests from Facebook friends and finally made the following announcement on my page:

To my friends who play Candy Crush: I am no longer addicted. But, like any addiction, I can’t even look at the game or I may have a set back. So if you’re sending me life requests, I’m sorry but… I can’t help you out.

Thankfully, while my addiction to this life-sucking game was exceptionally ugly, it was short-lived. My thoughts go out to the rest of you who can’t stop playing. If you need support, I am here for you.

I revamped my two blogs, began writing and got involved in a couple of new projects.

As a reward, I allowed myself some pampering at a local organic salon.

My hair was treated to a protein enriched organic shampoo and a conditioning treatment that smelled so good I could eat it, while I rested on the comfy reclining chair at the shampoo bowl (no neck strain!), covered in a lush chocolate-colored blanket. My hands were treated to a massage using a spectacular geranium and orange lotion while my scalp was massaged and rinsed. No candies danced across the insides of my eyelids!

I left the salon (located in a quaint courtyard that I had never explored before) a new woman, refurbished and ready to take on the world despite the chill. I even stopped to chat with the organic shop owner around the corner. Why don’t I get out more? How could I have gotten so sucked into a brainless game?

Next time I escape to overcome the winter blues, it’s going to be to my local shops. Or the coffee joint that’s not owned by Starbucks. And the new organic juice place.

“In the depth of winter, I finally learned that within me there lay an invincible summer.” ~ Albert Camus

Originally published on my blog, Putting It Out There.