Not a Happy Camper. 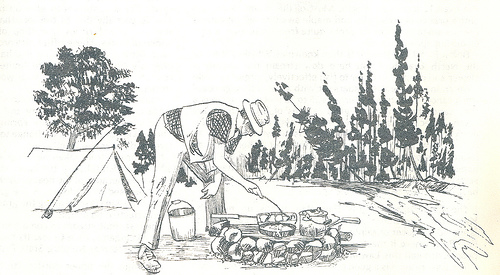 I spent childhood summers in a Maine cabin in Maine without television or telephone. It was rustic, but I saw a bright-line distinction between being “indoors” and being “outdoors.” If I wanted to use the bathroom, for example, I could go “indoors,” and close the door behind me. If I chose to be among the trees or swim in the lake, I could go “outdoors.” There was no confusion between the two locations, and I liked it that way.

When I started my grownup life here in Michigan, it became clear that people around here camp. They feel that others should camp. They speak with great love about being surrounded by nature, getting closer to family, and the fun of cooking over an open fire.

Early on, I deflected all invitations with a polite smile, a shake of my head, and a speech along the general lines of “I would not, could not, in a tent/I would not if you paid my rent/I do not like dirt, Sir or Ma’am/a stolid urbanite, I am!”

This approach worked until I was a mom with kids, and the camping conversations expanded to include my husband and children. It was fun! We could all go together! We could be right near the sand dunes and the lake!

Finally, we drove the four hours to the campground, which was a beautiful place. We found our plot, which looked to me suspiciously like an uneven patch of dirt with gravel on it.

After an hour spent forcing stakes into hard ground and flipping 27 pieces of tan nylon around and around to see where they fit, I went to find a bathroom. I knew that there was a perfectly reasonable bathroom near the entrance to the campground, but we’d been told that there was another located close to our plot.

I walked towards the “local” option, which was basically a “hole.” I would not go in, I could not go in, and my blood pressure spiked as I imagined hiking to the “real” bathroom at night.

After watching a truly glorious sunset over Lake Michigan, we crawled into our tent for the night. I was a damned good sport about getting undressed with hundreds of people surrounding my flimsy enclosure. The fact that I could hear strangers walking by and chatting as I stood, bent over, in my underwear, nearly paralyzed me, but I soldiered on. This was no “Blair Witch Project;” it was like being dropped into the living room of a garrulous insomniac entertaining 50 friends while watching NASCAR at full volume.

On top of the sensory overload, I discovered as soon as I joined Rob on our air mattress (Basically a pool float which was inflated with an air pump) that our relative volume caused me to roll, immediately, downhill and into him.

I don’t mind being close to my husband, but I am a “space” person, especially when I’m stressed. Furiously, I tried again and again to roll myself up to my side of the mattress, which rose jauntily from the “floor” and into the air; every time I succeeded in gaining two inches I rolled back down, gravity and the slipperiness of my sleeping bag triumphing over my rapidly weakening will.

Then I had to go to the bathroom.  Rob, had told me that if I didn’t want to use the “hole,” I could Just Do It Outside. Apparently “everybody does it” when they’re camping.

I managed to get, unzip the “door” and walk into the dark night. I could still see people sitting around glowing fires in the distance, but it seemed that everyone in our immediate vicinity had gone to sleep.

I walked away from the tent into a clump of trees, looked around to make sure no one was around, and dropped trou. I immediately saw a little girl on a bicycle, riding right towards me. Our eyes met, I entered a previously unimagined state of total mortification, and she rode away, no doubt to tell her family about the woman exposing herself in the woods.

(This episode remains hugely funny to my family. I think that says something very telling about their lack of character).

I did not recover, and I stopped pretending to be a good sport. I loved the beach and the walks in the woods, but that wasn’t enough to tip the balance. The air mattress eventually deflated so I didn’t roll as much, but then I felt rocks under me when I “slept.”

I became, gradually, totally overwhelmed by the constant proximity of other people, and the perpetual roar of dune buggies. I perked up on the last day, only to discover that it took another several hours to deconstruct the origami tent and roll around on the air mattresses, until they deflated.

I choose to remember the glow of the fire, good conversations, Lake Michigan on a beautiful day, and the discovery of all manner of footprints, crawly things and flowers in the forest. The rest I banish to some dark, locked place where I keep things like having my tonsils out and slipping on the ice in front of a boy I wanted desperately to impress.

I think I could enjoy camping in an adorable vintage airstream with curtains and a string of lights for the pop-out awning. I also think I might love a real “wilderness” site where there would be no sounds but our own, where I could be alone with my thoughts or a book, and where no one outside of my immediate family would be party to my dirtiness or my private biological moments. (I am far less bothered by the idea of bears, raccoons or other creatures than by the constant presence of strange humans).

I have promised that the next time camping is offered I will say “yes.” It’s been 10 years, and I’m considerably more chill. I totally believe in the transformative power of electronics-free time spent in nature to inspire the soul and restore peace of mind.

(Although I also wish you can do all that stuff and have a bathroom).