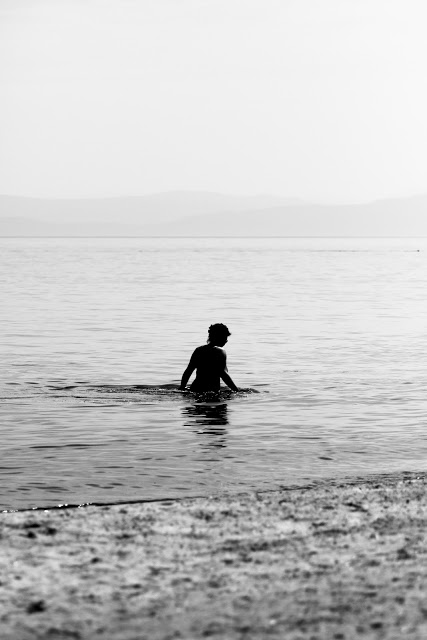 I have to confess—I’ve been having an affair with the poet Rilke’s, Book of Hours, for years now.

Its sacred, simple words draw me in again and again, like a deer to water.

The haunting love poems to a God so unlike the authoritarian Deity I grew up with, stir something very real within me. Something achingly familiar, as if the sickly young man who penned these words more than a century ago, spoke everything I have ever wanted to say, but with a frightening, lucid elegance, I will never possess.

In the midst of my own spiritual darkness and confusion, Rilke’s poetry whispered its humble lullaby.

His spirituality was not born in churches, temples or grand cathedrals.

There were no bolts of lightning or claps of thunder, no condescension, unattainable moralism or threats of hell. No, his experience with the divine was strikingly subtle, though unmistakably real, for him. Most of all, it was a far more internal experience than many of us in the west think of when we consider God.

“…when I lean over the chasm of myself –

my God is dark

This is the ferment I grow out of.

More I don’t know, because my branches

rest in deep silence, stirred only by the wind.”

Of course, Rilke was far from the first to speak of finding solace, or even the sacred, in silence. He was simply the messenger who made the most sense to me.

The first verse, and what is said to be the crux of Patanjali’s Yoga Sutras says, “Yoga is the stilling of the thoughts of the mind”. What he means is that the whole path of yoga (in Patanjali’s context, yoga meant union with God, not practicing downward facing dog) rests on this tenet. And with the goal of union at the forefront, meditators have been emptying the mind and sitting perfectly still for thousands of years.

In the book of Elijah in the Old Testament, the prophet climbs a mountain seeking God. But after his God is nowhere to be found in a great wind, fire, and earthquake, he hears a still, small voice—and there in the stillness, is God.

My own story starts on one of those horribly suffocating summer days. Mid August—no breeze and no reprieve. The kind of day where your clothes feel like they have melted to your skin, and you put ice cubes in your red wine, then strip down to your underwear to try and cool off. I’d had quite a day, too—I’d been yelled at by my boss, had an off day with the guy I loved and developed a raging migraine.

On my way home, I decided to take the scenic route by the sea in an effort to calm down. The next thing I knew, I had pulled the car over and was climbing down the rock face toward the water. I lay on a boulder with the waves licking at my toes and closed my eyes.

A torrent of anxious thoughts. And then:

The repetitive crashing of waves on the cliffs filled my ears, and suddenly I felt like I was not alone. I was being surrounded—no, held—by something very warm, and very beautiful. I lost all sense of self, of time, and of place and sank deeply into this embrace.

I felt at one point that I had actually merged with the waves around me, and that this was all that was or had ever existed.

I tried to make sense of what I believe was an experience with the divine—whatever that means to you—with what David Foster Wallace calls “the same force that lit the stars—compassion, love, the sub-surface unity of all things.”

I wrote the following:

Breathe me into being

name my existence as a flutter across a wave.

Pull me deeper inside you ‘til I blur,

and trickle down my legs;

I rejoin the fathoms in which I was born.

Hold me there and I’ll float, eternal—

this point in time is billions of years though a second.

The generations are all around me

their anguish and their ecstasy—

a living current crying out from the sea.

I give you my self and you bear it—

you who are pregnant void,

and I lose myself.

When I came to, the sun was setting and hours had passed, though it felt like just a few minutes. The throbbing between my temples was gone, replaced with a sense of unutterable calm. I drove home along the coastline lit with the orange flames of the setting sun feeling more whole and at peace than I had in a long time.

But what do we do with a story like this? It is so outside the realm of day-to-day existence that it’s tempting to file it under a category labeled “Other” and forget about it entirely.

But I suggest we do just the opposite. That we take this, and stories like it, and allow them to fuel our hope, however small. I for one, would like to believe that at the heart of our universe, beats a pulse of love, compassion and interconnectedness.

I would like to believe that our broken world has a chance at healing and wholeness, if only we would listen.