5 Things I Didn’t Expect from Being a Writer. ~ Freya Watson 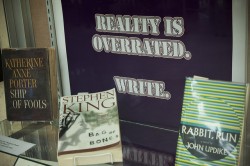 It took a long time for me to take my writing seriously.

Even after it was suggested by an English University Professor that I consider it a talent, I was reluctant to commit. I wasn’t a Marquez or a Joyce.

And besides, there was something vaguely scary about those gifted novelists who had no qualms about digging deep into their own darkness to find gold.

I first started writing as a child, initially prompted by my love of making up stories and a mother who encouraged diary-keeping. I still remember a school copy-book which I managed to fill from cover to cover with what was probably a very boring first ‘novel’.

But coming into my teens, writing became an escape valve, a way of letting off steam and making sense of emotions I was to shy to share or which would have been shut off at the first utterance had I tried to stumble my way through expressing them.

As a young adult, the same pattern continued. Emotions I couldn’t confess to lovers ended up in lengthy love letters, some of which never got sent. Fights I never had were re-routed into long notes of frustration and explanation, most of which were barely read or understood. Writing was not only an escape valve and quiet time for self-exploration, it also became a substitute for speaking.

But I was also slightly afraid that if I did acknowledge a desire to be a writer, it would mean having to make deeper contact with my own shadowy underworld. Being an avid reader, I was all too familiar with the archetypal image of the tortured artist, writing deep into the night, glass of wine at hand and rejected scraps of paper littering the floor.

Life has a funny way of sending you where you need to go, though, and I inevitably spent periods in the presence of my own darkness regardless of whether I wanted to or not. And, like most creatives, that’s where a lot of the intensity and fuel for my writing comes from. It’s something I’ve learned to embrace rather than run from. There was another reason, too, that I tried to avoid taking my writing seriously. Spending hours writing felt selfish to me. Regardless of the subject matter, writing has always been a joy for me.

Forget about wine, television and food: my ultimate escape has always been to hole up in a corner and write, even if what I’m writing will never be read by anyone else.

There’s something about having the luxury of time and space to do nothing but self-express that seems like the ultimate in self-indulgence. This is particularly true when I write fiction. Even now, years after I formally committed myself to writing and understand that authentic self-expression is probably the most valuable thing we can do, there’s a quiet voice in the back of my head that whispers occasionally ‘shouldn’t you finish that business report first’ or ‘what about emptying the dishwasher’.

But nothing prepared me for some of what I encountered as I fully stepped into myself as a writer. Perhaps these are peculiar to me—we all come to our writing with differing motivations. But I suspect that other writers will recognize at least some of these.

The first thing that surprised me was the deep humility I felt when something I wrote resonated with a reader. Although seeing one of my articles reach over 120,000 views certainly put a smile on my face, it was nothing compared with the profoundly humbling sense that words I have written—even imperfectly chosen words—can touch a reader in such a way that their resonance is felt years later. Even more humbling is the knowledge that often the words don’t really come from me in a very conscious way but are often prompted by something far beyond the logical mind.

Another unexpected side-effect is that I occasionally find myself lending my voice to those who don’t have one or who are afraid to use it. I have always seen myself as a writer who writes mainly as a form of self-expression. I’ve tried to ditch the need to save the world through my writing (although ‘saving’ the world is, in a roundabout way, something I enjoy doing when I forget it’s not really why I’m here on Planet Earth), and to focus on writing only when the urge to write is there. But there have been times when I’ve picked up my pen in order to write a piece which I know will ultimately support a particular cause or group of people—not because I personally have anything to gain from doing so, but simply because it seems like the right thing to do and the right time to do it. One of the gifts of a writer is the ability to provide words for experiences, emotions and situations that others may be struggling to express.

I guess this leads to something else that I wasn’t expecting. Writing isn’t all about words and sentences. The intention with which an article or any piece of writing is written is as important as the words themselves. The intention sets the tone and the vibration, and it is these that touch the reader as much as the words themselves. No matter how elegantly a piece may be constructed, or how logically argued a case is, readers who read with an open mind will always be influenced by the intention and vibration of the writing.

And writing is like any artistic creation, no matter how brief – once it has been created and released, the writer has to allow readers the freedom to respond to it in their own unique ways. The thing with words is that they are interpreted in different ways, depending on who is reading them and the space they are in. Every writer has to deal with projection and mirroring through their readers but it wasn’t something I was fully prepared for. Perhaps you can never really be fully prepared for anything until you are actually sitting in it and dealing with the reality. All the same, having a piece of writing interpreted in completely contradictory ways does take a little getting used to and is one way of quickly discovering the importance of letting go.

Finally came the disconcerting discovery of what I call the creative time lapse. What I valued and experienced at thirty is not exactly the same as in my forties, and I guess it probably won’t be the same at sixty which means that how, why and where I write shifts along with me. The result of this is that there’s a creative time lapse, particularly in the case of books, between when something is first written and when it is widely picked up by readers. In some cases this can be a period of years, so writers can be responding to readers who are resonating with a place in time and space that they have long since moved from.

Above all, though, there is the the wonderful fact that writers come in all shapes and sizes, as do readers. There is no one way to be a writer – other than the burning need to translate thoughts, emotions and energies into written words. We are all unique in what we want to say, why we say it and how we present it, and readers find the writers that they connect with. It is a madly diverse, world-wide tribe of which I am proud to be one.