After 10 Years Spent Searching, I Finally Found My Yoga Teacher. 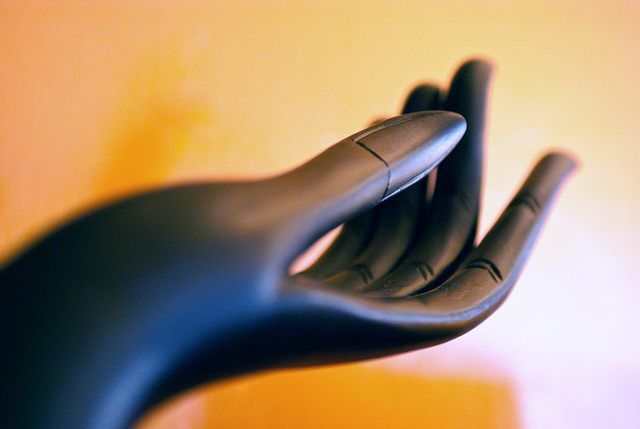 Two years ago I wrote an article called Dude, Where’s My Teacher complaining about the fact that I’d never been able to find a yoga teacher to study with. I’d done plenty of classes with lots of good teachers, but never come across a teacher that I felt I could really learn one-on-one from.

Then, last year, I spontaneously went to a Mysore-style Ashtanga class with New Zealand’s Peter Sanson because he was in town. I wasn’t an Ashtanga yogi. I’d never heard of Peter. I had no expectations.

This is what happened, written immediately after the second class I did with Peter:

I’ve just walked out of my second Mysore-style Ashtanga class with New Zealand’s Peter Sanson and I don’t know whether I’m coming or going.

It’s like my brain’s in first gear, or submerged in water.

If I feel into it, it’s like a consciousness shift, where I’m going sideways from one way of being into another way of being but I’m caught in limbo between the two ways of being.

It makes me want to sit and meditate for an hour or so just to settle and integrate. But my man is back in 15 minutes with Samuel and it will be straight into bedtime routine, so instead I’m grabbing the opportunity to capture this moment.

Ashtanga Yoga. Wow. With an experienced teacher. Double wow. I haven’t been to a yoga class in soooo long.

And I haven’t been to a yoga class with a real teacher since April, when I did a class with Katie Lane.

Peter, though is another step up from Katie, simply because of the depth of his practice and the length of time he’s been teaching. He studied directly with Pattabhi Jois for somethig like 20+ years. And what a treat to go and take a class with him.

I’ve been practicing yoga for over a decade now, and I despair at times because I’m still so very tight. I know it’s held tension, not muscular as such, but knowing this and being able to do something about it are two different things.

But Peter Sanson—who has never seen me before and doesn’t know my history—was able to see directly into my practice and what I’m bringing to it that I don’t need to.

Stop fighting with the poses! Stop wrenching your body round! Stop holding so much tension! Where’s all that tension coming from? You don’t need that! Let it go!

All of which is said with compassionate good humour and often a tap on the body that reminds me of exactly where I am holding the tension.

Yesterday, at my first class, I turned up without really knowing the Ashtanga sequence. I’ve done Mysore four times: twice in Wellington at Te Aro Astanga and twice in Dunedin with Tiffany Fleetwood-Bird. The last time I did it, the entire practice aggravated my hip and I felt like I was fighting the yoga the entire way.

This time, I was hoping to just follow along with the people around me, but it turned out that either they were going too fast and too many postures ahead for me to keep track, or they knew even less than I did. Peter was just in town for a week, and a number of yogis turned up who’ve never ever done Astanga.

That meant much shaking of the head at my postures and lack of drishtis.

But as it does in a serious yoga class with a dedicated teacher, the pearls of wisdom were also flying.

Ashtanga is renowned for it’s intense and forceful adjustments—which can be dangerous when delivered by less experienced teachers. Peter however knows his stuff, and with grace and humour was able to guide me into postures I’ve never dreamed of doing. My hips let go in ways they never have before.

And as always, when there’s a physical release like that, so too do the emotions fall. I spent much of the forward bending postures surrendering and sobbing in equal measures. And marveling at my head touching my knee with ease at times.

I left class determined to find my way back again tomorrow—despite living an hour away and having difficulty with childcare. Fortunately, I got my second opportunity.

This time I was more prepared. I had swotted up on the sequence, reminding myself of the postures I’d forgotten so I could focus more on presence and flow than on what comes next. And it paid off.

The start of class was staggered—as people arrived, they began. Peter created cohesion by chanting for about ten minutes at the front of the room. It was late afternoon, and the afternoon sun flooded in the expansive windows the the church hallway.

Through the windows, Frankton and Lake Wakatipu sparkled in the spring light. I was close to tears just at being in that space, feeling held and supported in my practice. I haven’t ever really had a yoga teacher, and today and yesterday, I felt that absence keenly.

So today, stepping into the first sun salutations, I was so grateful just to be there. It felt like a prayer, offering my body and heart up to the practice. God, I’ve missed having a yoga community!

Already, the pointers Peter had given me yesterday helped immensely as I approached each posture. I stopped fighting and started praying. And I could feel all the places where I was holding tension. Let it go let it go let it go. It’s my mantra right now. Let it go.

Two days of 90 minutes intense asana—and I ache. Yes, I practice yoga daily, but it’s often a ten minute kriya, or meditation, or pranayama. Asana has been woefully lacking and I miss it. I need it. I know this. Just as I know I need a teacher. Always have really, but have been really good at making do without one.

Now, musing on my experience, so much is coming clear, as always.

For a start, I really need to study regularly with a great teacher. Unfortunately, Peter lives in Napier, in the North Island. (I’m living in Glenorchy, in the South Island of New Zealand.)

Later, in conversation with a friend she asked casually,

“Why don’t you move to Napier and study with Peter?”

I laughed. Move to a town I’d never had any desire to live in just to study yoga? That’s crazy!

I’d already made the decision earlier that week to leave Glenorchy. I knew I was going somewhere—I just didn’t know where.

Then, unexpectedly and out of the blue there arrives a yoga teacher I really want to study with. And haven’t I been yearning for someone to study with for years?

Hell, I’ve written an entire series of yoga articles about it!

Was it so crazy?

I began to entertain the idea.

I called a good friend in Havelock North, just outside of Napier. She’s both a yoga teacher and a parent. She had nothing but good things to say about Peter, the location and the local yoga community.

Hmmm. A good teacher to study with, a yoga community to be a part of, people to teach even, maybe…

One thing led to another, as it invariably does when we feel our way through life just going with what we know to be true without trying to plan and control everything. I spoke to an uncle in Napier. I booked a ferry trip.

And, in early January I moved to Napier, Hastings and Havelock North to study with an Astanga Yoga teacher, Peter Sanson.

Me! Who is not an Ashtangi Yogi and who’s written before about how Astanga just doesn’t work for me. Oh the Universe has a great sense of humour, yes it does.

After a decade of looking, I’ve finally found a yoga teacher I can regularly study with.

It’s been three months of regular Mysore-style practice with Peter and oh what it’s done for my body and practice. But that is another article, or three.