I Didn’t Care About Yoga Until it Changed My Life. ~ San San Lee 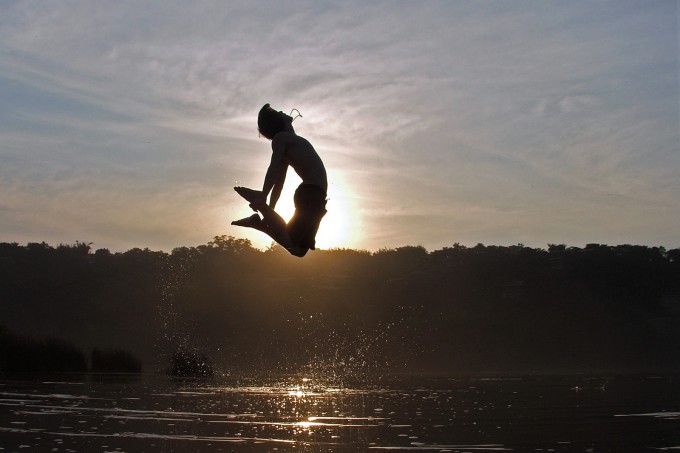 Kicking up to a handstand at age 50? Five years ago, I would never have believed it.

For years, while I provided lip service to the notion that I am able to learn at any age, I was in truth resigned to my then-current state of existence, with no real intention to acquire new knowledge to change anything: my stress level, my weight, and my overall outlook on life.

Because I ran my own business, I worked all the time, and during the rare times when I wasn’t working, I was worried about getting the next project. I had to “go-go” constantly and felt the weight of the world on my shoulders. High strung, anxious, and overweight, life wasn’t exactly enjoyable.

However, I saw this predicament as merely a by-product of my career choice; so I compensated by eating more, spending more, and complaining more, all of which fueled my rising weight and stress and wasn’t particularly helpful for my marriage.

A friend of mine, who works with many business owners and as such is frequently witness to this type of unhealthy lifestyle, thought gaining the ability to physically and mentally get away would grant me a fresh perspective. As such, she recommended I pursue yoga. Being a type-A personality, and falsely believing stress and anxiety are simply parts of a productive life, I initially dismissed her advice, but eventually gave in.

I started attending lunch time classes at a studio near my office, with the goal of attending once a week. I thought I would give it try for a while, but like many times in the past, I suspected that I would eventually abandon it. I was resigned to my old ways and saw them as inevitable. I didn’t know a single lawyer who wasn’t stressed, so why should I be different?

At first, everything felt hard. Holding the poses for several breaths tensed my muscles to the point where they started to shake. I had little endurance. The transition from one pose to the next was difficult as I lacked flexibility and moved awkwardly—like a “cow.” For the first few weeks, I was angry that it was so hard, that my muscles were sore and shaking, and that I was sweating so much. I was frustrated with my inability to keep up and felt like I was back in high school with the insecurities of an awkward and displaced teenager.

Yet, after each class, I couldn’t help but take note of the fact that I always felt better. Getting through the class required my full attention, and I was able to both physically and mentally get away from the office during that hour, just as my friend had hoped. The fact that with every passing class my muscles shook less and the poses and transitions were becoming less trying were other improvements I couldn’t help but notice as well.

I was also grateful for my patient yoga teacher.

He recognized my initial frustration and did his best to tell me it was OK and that things would change over time. The key, he said, was to keep practicing. As I continued to pursue yoga, I felt myself getting stronger and more flexible. I noticed many day-to-day things, including walking up the stairs and reaching for higher cabinets, were becoming easier, and as things became easier, I carried less stress and anxiety, particularly about the small things. The quality of my life, in tangible ways, was improving!

I began to feel and see differently. I no longer saw myself as an awkward person moving like a “cow.” I now possessed the ability to move fluidly and smoothly—it just took practice and work. The physical manifestations were altering my self-view and I was less emotionally defensive. I was finally able to see myself as a person capable of improving things I didn’t like, able to take charge of the things I knew I could change and being more accepting of those I could not.

Around this time, another yoga teacher appeared, who, through his teaching method, doubled down on “acceptance and change:” He had us work on holding the down-dog position for five minutes. We first started with a one minute hold, then added 30 seconds each month, reaching the five minute goal after nine months. It was tremendously satisfying to reach that goal, yet what I learned during the process was even more satisfying and important because it altered my outlook on life.

As I gained strength and endurance and pushed through the discomfort of the longer down-dog hold, it became less difficult. Also, as I worked at it, I gained the confidence that an additional 30 seconds might be doable.

Each of those 30 second increments were necessary parts of the whole, and a plan was devised to get there, to reach the goal. The most important lesson learned, for me, is that things don’t just happen magically. There has to be a clear intent, a plan, the willingness to invest one’s time, and the discipline to simply show up.

Another one of yoga’s biggest life lessons for me is this: Things are generally more straightforward than we make them out to be. For example, if losing weight is a goal, as it was in my case, it’s usually a matter of acquiring better habits—eating less and healthier, and exercising more. Focusing on the “why” may be helpful, but if too much focus is placed on it, it can potentially create a feeling of resignation and inevitability.

Yoga helped lead me to the understanding that any meaningful change takes focus, time, and work. Unfortunately, much of today’s society seems laser-focused on immediate results; there is an implied immediacy to goal accomplishment. This creates pain and limitation and often the reaction is to over-think and over-analyze a situation in an attempt to avoid perceived or real failure.

This limits one’s ability to focus on the work and the commitment needed to make changes.

At some point, deliberate action must be taken. I may not achieve my goal instantaneously, but I certainly won’t achieve anything if I take no action at all. By applying the individual lessons learned in yoga, I lost 50 lbs and kept it off, I kicked a nasty caffeine addiction to the curb, I got off high blood pressure medication, and I was finally able to get over the fear of and actually learned how to kick up to a handstand.

Because I gave myself both the time and the means to reach my goals, I was able to make lifestyle changes to sustain those improvements. The key for me is consistency—the same way my yoga teacher had the class build towards the five minute down-dog hold consistently over a nine month period. Now when faced with something I think might be impossible, I think back to the improbability of a five minute down dog—and I know I can face almost anything.

I started yoga at the age of 46 and through the practice reconnected with my capacity to learn new things and aspire towards new accomplishments, which previously I had thought “impossible.” Once I realized I can change and had the wherewithal to do what it took, I formulated a plan to work toward it—no more over-complicating the issue, no more rationalizing that I need more information, and no more excusing myself.

Was I capable of making changes without yoga? Probably—but for me, yoga is what it took to show me that (a) “more” is possible, (b) getting to “more” takes focus, time, and work, and (c) so long as I continue to work and practice at it, I can get closer to the “more.”

My yoga practice is an excellent continual reminder of this outlook, and I no longer have to be confined and resigned to my former ways. In fact, like the poses, I can always be “more”—as long as I am willing to work at it. Thanks to yoga, I am no longer resigned to the limitations that I once imposed on myself.