The Gift of The Ujjayi. ~ Courtney Trowman 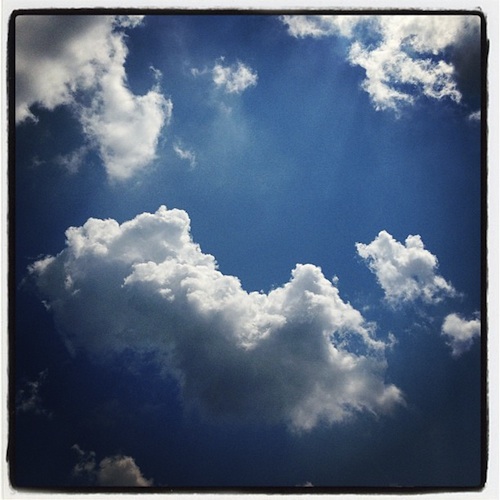 We’ve all heard that the way to a man’s heart is through his stomach, but there doesn’t seem to be a saying for us women folk. Most likely that’s because we’re so fascinatingly complicated.

I am a yogi of still relatively newbie status and yet I’ve discovered that the way to a woman’s heart is through her lungs…this woman anyway.

I’d done yoga half-heartedly on and off for years. Being a dancer, it seemed like the thing we were supposed to love to do, that and pilates. I couldn’t stick with it because honestly, it bored me. I was approaching all my workouts with the no pain no gain mentality. For awhile, Bikram was the only style I could tolerate. Because of the heat I felt like I was actually doing something even if that something was just sweating my ass off.

Then in October of 2011 I tried returning to yoga one more time. Living Social was offering a five class deal to a local studio, a mere 15 minute walk from my house. This time I had no interest in the “workout” aspect.

I was desperate for an escape from the angst and drama of a toxic relationship’s prolonged death. Cheap therapy as it were and healthier than hiding out in the local happy hour.

In that first class, in the first ten minutes even, I learned something I’d never been taught in previous classes… how to breathe.

To be fair, I probably had been given those same instructions before but obviously wasn’t ready to truly hear them.

Whatever I’d been doing before was clearly not breathing. This felt amazing! I was instantly more relaxed. Drama? Angst? Reid? Reid, who? Since the class was labeled Beginner, I figured I would be familiar with most of the poses and chose to let that piece go, or rather flow. Instead, I made it my intention to focus all my attention on my breath for the entire 90 minutes.

While in the past I would’ve given up and over to worrying about the depth of my Warriors, this time I kept zoned in on the teacher’s imagery of sipping through a straw in the back of my throat and then fogging up a mirror.

I had been completely present the entire time and yet in what seemed like 20 minutes, Jules was already inviting us to take our Savasana (corpse pose). I couldn’t remember the last time I’d felt so peaceful or happy.

I was giddy as I floated home. It wasn’t until the next day that I actually felt that my body had done any work. I started going three days a week, but the sore and supple muscles were just the icing on the cake. I felt inches taller not just from the realignment of my spine but from the expansion in my lungs. In addition to my added inches, my expanding lungs also directly contributed to the grand re-opening of my heart. It too, actually felt as if it was getting bigger.

I was becoming more emotive, but not in a mood swing kind of way, in a fully engaged operating on all cylinders kind of way. Previously I had earned the nickname, Bar-flaps, from my closest girlfriends regarding my emotional M.O. One could catch a glimpse of the inside over the top or by peeking underneath. Someone might get through one flap, but rarely ever both and if they did, they’d better watch out for that backswing. I’d always worn this label as a badge of honor.

But now, with each ujjayi breath my heart began to break free of those doors blowing them off the hinges completely.

I could finally step outside of myself see how dim my light had become, how dim I’d allowed it to become. Instead of feeling naked and weak, I found strength in this kind of vulnerability and exposure. I was stepping out of the shadow and into my own spotlight. I tingled with excitement as I and everyone around me watched my confidence soar.

Very shortly thereafter I moved into my own place and put the final nail in the coffin of that important but unhealthy relationship. The inevitable rebound ended up being a slow love affair with myself.

Ujjayi breathing gave me stronger lungs which in turn gave me a more open heart, which as I’ve learned, while vulnerable has the strongest beat.

It refueled my intuition and confidence, has led me on adventures around the world, has me living out my dreams, has shown me my future husband, and has made me the woman I always wanted to be. All that from the one thing we do every day, can’t live without and invariably take for granted.

I admit it is fun to try the circus trick poses, but I’m always reminded of this pearl from my own yoga teacher, Ganga White: “Yoga is a healing art, not a performance art.”

Now that I am a teacher myself, whether it’s my own practice or in leading a class I still step on my mat with the foremost intention of breath. I always tell my first timers that if they learn nothing else I will count it as a huge success if they walk away with the gift of the ujjayi.