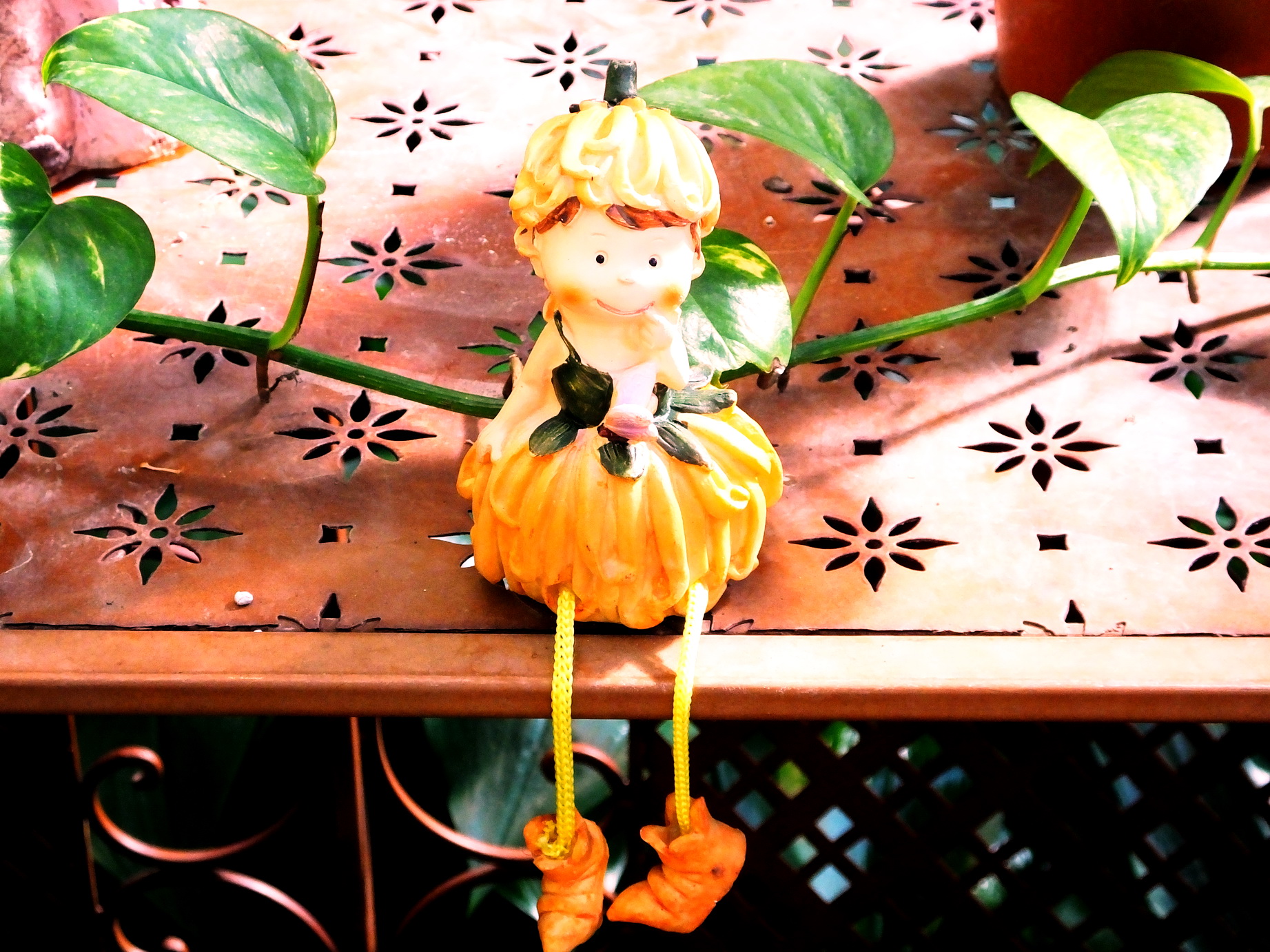 Sometimes it takes being in a fake world to see how much we share with the rest of the real world’s citizens.

I’ve been living in Japan for several months now. My husband and I came here after three years of travel through Southeast Asia and India, half-ready for what Japan had to offer and half (mostly my half) uneasy about removing myself from the sometimes-difficult-and-always-sublime world of wandering around the globe.

Of course, Japan, for me, is technically still in the travel zone. I could not be less Japanese, and some days I feel the gulf between my host country and I growing exponentially.

What surprised me the most about being here was how utterly different it feels from being on the proverbial road, even with this road being not too far away from our most recent homes in Thailand and the Himalayas.

Part of it is that my husband is on his home turf. We are no longer two one-daypack-only budget travelers plopping down to make temporary digs according to our whims. We are now two people taking a break from movement in one of our countries of origin.

One of us is speaking in his native language again. The other one of us is shocked at her own obstinacy over learning the language, and this is not a country (especially outside a city centre) where people are going to come up to you and start chatting in English.

(As anyone who’s been to India knows, not having people ask you every minute detail about your personal life over a chai or an impromptu photo session with seventeen of their closest friends is just weird to me right now.)

Mostly, I’m in awe of the place. I love how incredibly polite people are, and how respectful of the privacy of others. I love how even the simplest dishes of food (though I have yet to find a really simply-wrought meal here) is prepared with the utmost precision, attention to detail and exquisite appreciation for harmony and balance.

I love how beautiful everything is, from the Zen poetry, to the little stone representations of Jizo Bodhisattva dotting the streets and forest grounds, and how the trees are sculpted and arranged on the street so that they look like sculptures no matter what the season (nature is so brilliant, and Japanese culture is so brilliant for intuiting this on the deepest levels). 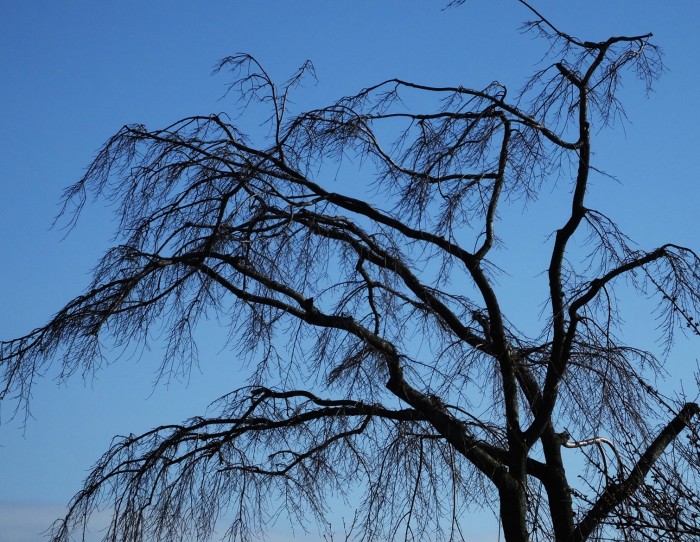 I love how there are a billion types of tea and a trillion types of rice, and how everyone thinks it’s an obvious skill to differentiate between them all (though sometimes it drives me crazy).

Often, I’m just confused. And this is because, unlike when we were traveling and hanging out with the many foreigners on the same travel circuit as us (as well as many locals who could give us insights about where we were), here my observations are just that: observed, as though on the other side of a very palpable wall. I’m having trouble getting at what makes this very old, deep and cryptic culture tick.

Which is also why I know with such certainty that it’s right that I am here. I can’t wait to dive deeper into a place that has captivated me for decades now.

I’m very humbled by how not-easy immersion has been, and for every time I’m frustrated that I can’t connect through my tried and true forms of communication (like my tendency to incessantly chatter), there are a hundred times that I just can’t wait to slowly start scratching the surface of understanding.

Japan is already teaching me (someone who can tend to believe that Rome may, in fact, have been been built in a day) the art of patience.

The other day, we went to a tourist attraction outside of town that boasts an evening light show. We arrived early, and spent the afternoon roaming the well-groomed grounds and botanical garden, sipping tea and playing hangman while waiting for the sun to set.

Darkness transformed the place into a scene of true ethereal beauty.

I am a hardcore cynic when it comes to “attractions.” I’m always thrilled to visit virtually anywhere, as long as it’s on my terms, which usually means paying no attention to the main attractions, taking abstract photos to my heart’s content, and finding somewhere unusual to plunk down and write.

But I couldn’t help it. I was mesmerized. Everything was lit with taste and an uncanny ability to transport you to somewhere you can’t quite name. We went through an archway brightened (mostly white) by 7,000 LED lights—you feel like you and a thousand other people are getting married to love itself in that place. 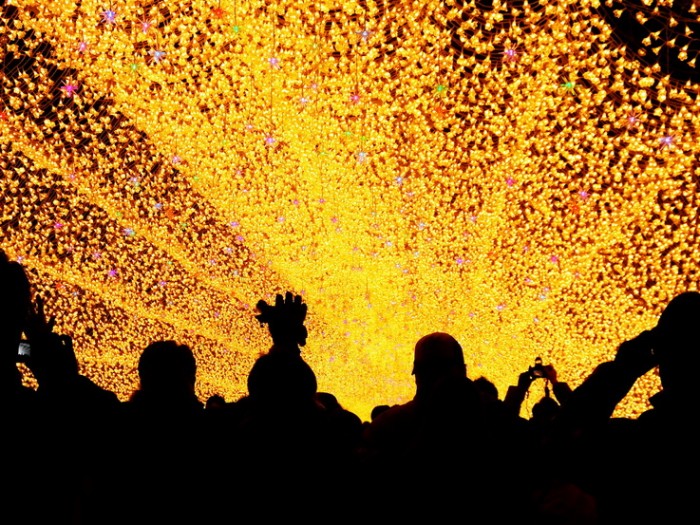 No one pushed or got in anyone else’s way. We were in this together.

I thought that was the main part. But, emerging from here, we came upon something even more spectacular. Before us was an enormous “scene” of Mount Fuji and its surrounding fields. It was like those hyper-real 3D or holographic placemats you can find that are terrifically gaudy and awesome at once. Only this was enormous, and not gaudy, somehow. Not even kitschy.

It should have been. These things always are, to me. But it was pure magic. It was a come-to-life pictograph of a most-famous mountain created by a billion lights taking us through a day at Mt. Fuji, from the early morning hues, to the stark pinks and greens of early morning, to a lucky afternoon featuring a rainbow across the mountain, to the warm colors of a setting sun.

All of this to the strains of the Gone with the Wind soundtrack, which I have to admit I was proud to recognize in this surreal context.

Everyone was quiet, watching with reverence. And I was watching them, when suddenly, an overwhelming feeling came over me. I felt like we were all sharing a dream. Of what? I’m not sure yet. But it was a dream that belongs to all of us, and I felt acutely that we were taking part in one great big, momentous drama of life.

It didn’t matter that there’s so much I haven’t figured out yet. Under the great luminescence of a perfectly sculpted imitation of life, we were all living. There was nothing to interrupt us from each other or from ourselves.

In silhouette, foregrounding the magnificent idea of holy Mount Fuji, our differences faded and our bright, sparkly hopes moved together toward a setting sun we were willing to believe was true.

“It is better to travel well than to arrive.”