I’m Beginning to Think Disney’s Not So Bad. 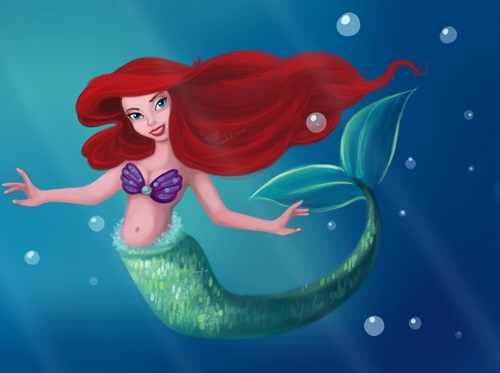 Further Contemplation of a Disney Classic.

I’ll be the first to admit to the fact that I haven’t been all that thrilled with the images of women that Disney has conjured up before the brains of Pixar came on board. I haven’t exactly been quiet about that fact.

But, fasten your seat belts, I just may be about to cut Disney a break.

I was twelve when The Little Mermaid originally came out, and I was obsessed with it. To say my brother—Chris, who was fifteen—and I knew the words to all the songs would be a gross understatement. We knew every word, every sound and sigh of the movie in its entirety.

Even now, the song Part of Your World catapults me to the era of an angsty middle-school-girl with low self-esteem, identity confusion, and who would sing as loud as she could only behind closed doors. These days, I prefer singing in the company of others, loud and obnoxiously dramatic—an appreciated turn of events.

So, when that song came on Pandora yesterday, I let loose, with wide-leg lunges and fist-punches to the air as I sang along, until Opal yelled, “Mommy! I can’t hear the words!” Fair enough. So I kept up the expressive dance moves, but altered the performance into a lip-syncing spectacle.

Jesse just shook his head and went to the bathroom to shave.

Opal then asked if we could watch the movie, and I hesitated. My sweet memory of The Little Mermaid had been hijacked by the intellectual deconstruction of the plot: a young mermaid gave up her voice to the sea witch in order to become human and capture the heart of a (rather dim-witted) prince. The horror! I thought. What kind of message does that send to our youth?

But since I couldn’t think of a way to explain this to Opal, off to the library we went. It has been 25 years since I’ve last seen this film, and I had no idea how it would stand up against my childhood love, as well as my recent issues with the Disney Princess archetype.

Turns out, it wasn’t all that bad.

I will never forget when my brother sent me a dvd of my niece, singing Part of Your World when she was three-years old. She’s nine now, and has long since shed that fumbling baby sweetness. The video came long before Opal was born, and I watched a hole through that video. My niece was heartbreakingly earnest, missing some words, unable to pronounce others. If I remember correctly, she was wearing just a diaper, caramel-colored ringlets hanging by her eyes.

The expansive princess dogma had yet no bearings on her; she just loved the music.

During that time, pre-Opal, I was still genuinely excited to share my favorite Disney movies with my future-daughter. (The Little Mermaid and Aladdin were my favorites). But in the four years since Opal was born, Disney has soured in my perception. The notion of Princesses has become synonymous with weakness, a lack of intelligence. Disney Princess magazines are all-too-often focussed on fairy-tale lives and the endeavors of rich royalty. This is not only shallow, it is boring.

And yet, upon our recent re-watching, I was reminded that, actually, all hell breaks loose when Ariel makes this decision.

Sure, it’s a bit ridiculous to think a 16-year-old could be of sound mind and body to decide who she should marry. (If that was true for me, I’d have married the cutish ‘salad guy’ at the local restaurant where I was a hostess with the slick, blond ponytail. Oh dear.)

I also hate that Ariel had to give up her mermaid-ness and family to be with this goofy guy (like I said, all Disney characters were all a bit shallow until this last decade). But this is a much better fate than she would have had if the movie played out exactly like the creepy Hans Christian Anderson original it was based on. But that is a different topic that you can research another time, if you so choose.

However, aside from those bullet-points, I was surprised to find the movie continues to be entirely watch-able.

And, the music in Mermaid still rocks. (Aside from the song, Kiss the Girl, which reminds me all too much of how I behaved at that time with men that it makes me cringe.)

So much of the movie is about wanting what we don’t have, falling victim to the grass-is-greener mentality and how much suffering and confusion this causes.

The song Part of Your World is about a young mermaid who is dying for independence, freedom, a different life than she’s been allotted. (What teenager can’t relate to that?) Under the Sea is Ariel’s crab-friend, Sebastian, trying to convince her that her current world is, really, pretty spectacular.

Poor Unfortunate Souls, sung by the sea witch, is much more profound than I ever could have comprehended in my youth. It’s essentially a chorus about the endless predicament of human suffering. How a quick-fix always, always, comes with a list of consequences.

What I’m saying here is that in spite of the shallow-seeming characters and imperfect plot lines of the more classic Disney films, there is still the potential for some real gems to be mined from them.

And to be able to share some of my own childhood memories with my daughter without feeling like I’m promoting the impossible notion of happily ever after, is a wonderful thing.