I’m fortunate, in a sense, to be the type of person that gets more sentimental about the times I’ve read a certain book or heard a particular album than I ever do about holidays.

I still recall the almost breathless inability to accelerate time and make Christmas arrive more quickly. Or the Halloween costumes, Easter candy or the great Thanksgiving feasts (and the not-so-great family fights that would sometimes ensue).

The holidays, as idealized rites of passage, still resonate; but these occasions are not capable of enhancing or obliterating whatever mood I’m already in.

The absence of my mother might feel more acute on holidays, but none of these events have been unduly marred during the past decade.

Surprisingly, even the week that presents a triptych of raw remembrance, comprising my mother’s birthday (August 23), and the anniversaries of her death (August 26) and funeral (August 30) have been bearable.

These have become prospects for celebration, however somber, and I am mostly able to channel that grief into gratitude for the times she was around.

Similarly, Mother’s Day is seldom joyful, but it provides an imperative to consider happy times and my relative good fortune—despite what is obviously lacking, now. It also obliges me to behold my family members and friends who have become admirable mothers themselves, and I am humbled to see my mother alive in the looks they give their children.

And if I’m ever inclined to stop and consider how corny or manufactured these sentiments may be, I console myself with the awareness of how increasingly corny and manufactured holidays in America have become.

Any time I need to be reminded that I am one of the lucky ones, I look at the picture taken the day I was born.

The pose is not unique; virtually every child has at least one frameable shot of the post-delivery adoring gaze. At least, every child fortunate enough to have been born in a hospital (or home) under safe conditions to a mother who welcomes the moment and, most importantly, is prepared for the moments (and days and years) that will follow.

I don’t need to resort to religion or sociology: I can simply consider the circumstances and the infinitesimal odds that I ever made it from my father to my mother in the first place (if you know what I mean).

What child cannot recall asking, on Mother’s Day, why there wasn’t a Kid’s Day?

The response was always the same: Every day is Kid’s Day.

Most of us who have lived a single hour in the so-called real world quickly came to register how accurate this tired cliché actually is. Indeed, those of us who were sufficiently well-raised didn’t need to wait that long for this epiphany to occur.

A year or two punching the clock, paying bills, cleaning up one’s own messes—the literal and especially the figurative ones—and generally attaining that independent status one strove so single-mindedly to attain is impetus enough for reflection. Not merely an appraisal of how impossible it would be to repay the investment made, measured in money, time, affection and approbation, but a recognition of what was truly at stake: the selflessness our parents displayed, putting in all that effort to enable you to become our own person.

The best gift a parent can give (you come to understand) is loving you enough to allow you to not be exactly like them; to encourage you to figure out exactly who you are supposed to become.

Holidays have not been intolerable, no more than any other day, especially the bad days when I miss my mother most. As a result, I reckon I’m not the only one who has found that May 13th, my birthday, is the single occasion that can never be the same.

Inexorable nostalgic pangs, the pull of biological imperatives, or the simple fact that I’m still human has ensured that the annual recognition of my birth day is imbued with sadness and a heavy longing I don’t feel any other time.

It seems a reasonable trade-off: that deep and uncomplicated connection, along with the longing any child can comprehend, signifies that yet another cliché holds true: absence makes the heart grow fonder.

I visited my mother’s grave the first several years for the same reason I used to attend church: it was expected, it was meant to make me feel better, it was supposed to signify something.

I stopped going for the same reasons I ceased attending weekly services.

Catharsis by commission most likely satisfies only those who don’t realize the game is rigged, spiritually speaking. Or else, they do know it’s a game and they couldn’t imagine it any other way. (It is not the people with genuine faith the faithless have reservations about; it’s the folks who find their faith so onerous or insufficient that it causes them to act in ways antithetical to the precepts they purportedly approve).

The historical intersections of culture and psychology suggest that there can be no archetypal way to grieve, just as there are no ultimate answers for how we might reconcile our place in the world, including the non-place before we are born and wherever we go when we die. But there is certainly a wrong way to grieve and grapple with the transient nature of existence.

Anytime we are encouraged—or obligated—to follow a path someone else prescribes (particularly someone who is getting paid for the prescription), it’s a short cut to resolution we can only attain for ourselves.

Cemeteries are like churches: created to contemplate people not accessible to those still living. They serve as memorials, affording an opportunity to ponder this world and reconcile our place in it.

I’ve been to the cemetery, and I don’t mind going to the cemetery. From a purely aesthetic perspective it is a lovingly constructed memento for departed souls: names and ages and years connected by what all of us ultimately have in common. The cemetery is where my mother’s body rests. Anyplace else I go is where she lived; where she still exists. Wherever I go, she accompanies me.

But sometimes this is not enough.

So I return to the lake by my father’s house.

The lake where I once caught sunfish; where I swam and drank my first beers.

The lake where I skinny-dipped with the girl across the street, not knowing what I’d do without clothes on dry land.

The same lake I walked around during those last two weeks, my own routine once the August sun began its slow descent and most families sat down to dinner.

The only place I was ever alone those last two weeks: a respite from crowded and uncomfortable thoughts; a retreat from the inevitable rituals of adulthood.

The same lake my father and I ended up, later that final night, after it was over and my sister had returned to her family. The lake we silently circled, not saying much, not needing to do anything other than exist.

This is where I go. I return to this lake. It is my church, my sanctified place for reflection.

The water flows and recedes, feeding and restoring itself. The trees surround the water, their leaves emblems of Nature’s enduring procession. The sky stares down impassively to see its ancient face reflecting up. At night the stars strain toward the earth, fulfilling their preordained purpose.

How do you get over the loss?

That is the question I asked a former girlfriend who lost her father when she was a teenager.

Hearing this, you can acknowledge—and appreciate—the sentiment; you can easily empathize with how inconceivable it is to possibly heal from that kind of heartbreak. But it isn’t until you experience it that you comprehend the inexplicable ways this reality is an inviolable aspect of our existence: it’s worse than you could ever envision, but if you’re one of the lucky ones, it’s also more redemptory than you might have imagined.

Mostly, you accept that a day will seldom pass when you don’t think of the one you loved and lost. And more, you wouldn’t have it any other way.

Every day is Kid’s Day, and who would hope to change that

Every day, for me, is Mother’s Day. And on my birthday, I don’t celebrate myself so much as acknowledge—and appreciate—the one who did the most to help me get here.

These are excerpts from the memoir Please Talk about Me When I’m Gone. 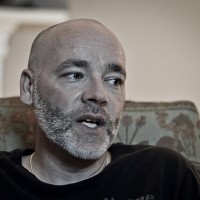