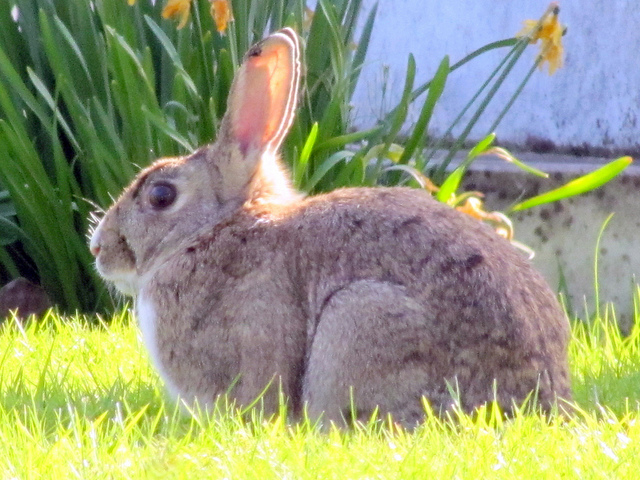 Early this morning on my first walk around my new neighborhood, I almost tripped over a rabbit in the narrow path through the woods.

Being a mom with no kids at home at the moment, I find I need to lecture somebody, so this morning it was the rabbit. Having at least a little decorum, I didn’t do this out loud. But I thought loud thoughts at it, like, “I could have been anybody! You never know who’s going to walk down this path at this time of day. When you hear or see a stranger, hop away!”

This probably doesn’t sound like a preamble to discussing soul mates. But in terms of my own life and the way my own particular subconscious talks to me, the rabbits are important. I say rabbits because there have been others.

Most notably there was the rabbit that hopped across the road in front of my car every morning and evening for the last eight weeks or so, until I moved that is. And when I say “every” I will clarify that this is not one of those times when I exaggerate for effect.

To skip from rabbits back to soul mates, a few years ago I met a man who, when I was around him, made me feel that soul mate-y kind of feeling. It was the classic:

2) I feel permanently connected to you, and

3) to copy the words of a man I heard on a radio interview, “the space between us feels alive.”

It was a virulent strain of chemistry, for me at any rate. I honestly have no idea how he felt. This last statement is a clue that the relationship was not a keeper.

In fact, the relationship had all the holding power of a popsicle on a summer’s day.

Still and yet, that soul mate-y feeling, once it burrows in, is so difficult to eradicate. It’s like an infestation or a fungus. Maybe it’s like other, nicer things if it goes well or at least better than this relationship went.

At any rate, I spent over a year trying first one method and then another—not all of them entirely healthy or recommended. Then I tried several methods all at once to wrest this “feeling” free and untangle myself emotionally.

As I began to see a light at the end of this soul mate tunnel, a rather odd thing happened and I began to think of this man as a rabbit. I didn’t consciously do this, as in, let me find a metaphor for this man. If this man were an animal what animal would he be? Because, had I consciously tried to match him to an animal, it would have been a very different one depending on my mood. A few come to mind now: worm (even though that’s not really an animal), ferret, baboon, snake or goat. My brain would have come up with these. But, over and over, like a soft, tiny whisper from somewhere…rabbit.

In an attempt to unlock all of this from my head and, basically, do a sanity test, I told a close friend about this man and the strange idea I had that he was a rabbit. I joked that maybe he was like the rabbit named Harvey, in the eponymous movie. After all, the man I was talking about was:

1) completely invisible in my day-to-day life,

2) the same height as Harvey in the movie and

In grabbing hold of the movie Harvey and making a joke of the whole thing, I thought I had tied it up in a neat little bow. I swept the soft whispers of “rabbit” down the rabbit hole and didn’t go chasing after them like Alice. Although, sometimes I was aware of the surreal nature of what had happened when I met the man who made the air feel alive, even if he did have more than a smidge of Mad Hatter in him and the incident had turned my world upside down in a very unfortunate, Tim Burton sort of way.

The fact is though, I live in the real world where there aren’t soul mates, not really.

I have to earn a living as a single mother and I have three teenagers. I have to buy milk and then remember to throw it out before it goes sour. I have to scrub grout in the bathrooms. I have to find outfits that go together every morning before I’ve had coffee.

It wasn’t until this morning when I almost tripped over Peter Cottontail that I remembered the other rabbit, the one my grandparents purchased for me in a drugstore in Miami when I was all of three years old. My parents were there, too.

From my three-year-old perspective, it was a long night of dining out and driving all over kingdom come. I think my grandmother let me have the plastic rabbit (a Bendy Bunny—God, how I love the internet) to keep me from completely melting down.

It was love at first sight. I quite literally fell in love with Bendy Bunny, a piece of plastic about eight inches high and shaped like a skinny, biped rabbit. He was eating a carrot. I could move his legs and arms around. I was in heaven.

However, tragedy struck and in all the hustle of the evening, the rabbit was lost, at which point I believe I did have a complete meltdown. We had to retrace our steps until my dad put a stop to it, all that effort, he said, over nothing but a dime store toy.

How could he know it was the love of my life and that I felt a part of my soul had been ripped out?

How could anyone guess the depth of my grief?

To them, I was just tired—a long day in the sun, etc…

Believe it or not, that plastic rabbit haunted me for years. Even now, if I put my mind to it, I can feel the panic and shock of that windy night in Miami. I can feel, as though with my young hands, the carved out walls of emptiness of the cold, leather backseat in Mimi’s Cadillac.

So, do I know what that soul mate feeling is? Yes, very well.

It’s like an internal map made up of all the fibers of my nerve endings.

It’s the feeling of looking up and falling into the stars.

Can I make any sense of it whatsoever?

Maybe only as much as Alice.