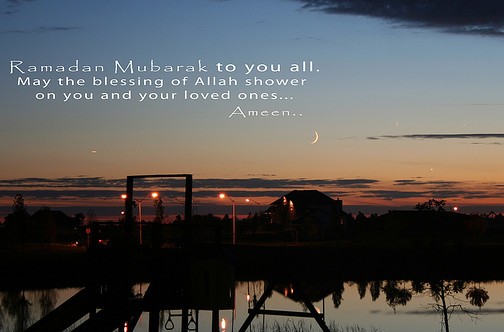 By understanding faiths outside of our own, we can create bonds of friendship and understanding that can lead to more peaceful tomorrows.

We are rapidly approaching the holy month of Ramadan, the ninth month of the lunar calendar. It is an important and sacred time for Muslims, because it is the month in which the Prophet Muhammed (SAW) received the first of his revelations. Currently, Muslims around the world are making their preparations—physically, mentally and spiritually.

Physically, they are preparing for the long days of fasting, which includes the avoidance of all food, water, smoking and sexual relations beginning each day before sunrise until the fast is broken at sunset.

Mentally, they are contemplating about where they are presently with regards to family, life in general and faith—and setting new goals to achieve during Ramadan that will enhance their lives in the months and years beyond this year’s Ramadan.

Spiritually, there is a re-commitment to their faith. Perhaps reading and memorizing more of the Quran, more time spent in meditation and contemplation, increasing service and charity to others, recommitting to the daily prayers if their practice has been lacking, practicing forgiveness and partaking in all of the special rituals of Ramadan.

There is a renewal in the quest of living a life of right thoughts, right words and right deeds. Proper spiritual preparations are taken very seriously, as it opens the door that allows one to receive all of the blessings that can be embraced during this auspicious time of purification and transformation.

If you are not a Muslim, there are several ways that you can be part of Ramadan. You can make this a special time to learn more about Islam, perform kind acts that support the Muslims you know in their observance of Ramadan and even take part in some of the traditions yourself.

Here are some tips for Non-Muslims during Ramadan.

1. If you are a business owner or manager, consider allowing a more flexible schedule for your Muslim employees during Ramadan.

For example, in Muslim countries work schedules and other obligations are often more flexible during this time to allow for the focus to be on the fasting, time with family, charity and spiritual work.

Some countries like Egypt even go so far as to temporarily suspend daylight savings time. Generally, here in the US, work life and responsibilities do not decrease or fluctuate based on one’s observance of Ramadan.

By allowing Muslims to temporarily have a more flexible work day it could allow for the employee to start earlier in the morning, allowing them to be with family and focus on spiritual work during the later parts of the day when the fast is most likely to begin impacting them.

For others, a later than normal schedule might be a better solution for their individual needs. Of course, it is understandable that in many professions a change in schedule is simply not possible.

2. Join Muslim friends, co-workers or an interfaith group for an Iftar meal.

It so common to see people who are not Irish celebrating St. Patrick’s Day, those who are not Christian participating in Christmas activities—why should it be so odd for non-Muslims to be part of Ramadan?

Don’t we all have something to learn from each other.

“O mankind, indeed We have created you from male and female and made you peoples and tribes that you may know one another. Indeed, the most noble of you in the sight of Allah is the most righteous of you. Indeed, Allah is Knowing and Acquainted.”

By joining in an Iftar—the meal that breaks the fast each day—you will surely be made to feel welcome and you can feel good knowing that you are part of the celebration of the diversity in our world.

Perhaps you will even try fasting on the day that you choose to attend Iftar. Whether you enjoy Iftar with a family or at an organized interfaith event, you will surely learn something new and be blessed with a wonderful meal.

3. Become familiar with the Qur’an.

As true with any religious text, people tend to take pieces out of context that support any point they are trying to make. However, it is always important to read what comes before and what comes after any piece that is being referenced.

So, take the time to empower yourself with firsthand knowledge of what is actually written. In addition, by using a Qur’an that is not only translated into English (or your native language), but also contains commentary, you can be more familiar with the the time period, political climate, cultural norms, etc., that were present during the time that the Qur’an was revealed.

It can be empowering to be knowledgeable about these things when we are often given so much misinformation above Islam through the media and through extremists, who in reality, misrepresent the billions of people who practice the faith peacefully and are productive citizens in the countries in which they live.

4. Watch a film about the origin of Islam.

There are many films available to learn about Islam and two of my favorites can be seen here.

The Message (1977), starring Anthony Quinn, is a beautiful film about the earliest days of Islam.

This year, for those of us living in the northern hemisphere, Ramadan will be during  the hot summer months, which also happen to be the longest days of the year.

The duration of the daily fast will be over 16 hours for most and longer for some. What a great opportunity to reach out to your Muslim neighbors and perhaps mow their lawn, help with gardening or any other outdoor laborious tasks as a friendly gesture of kindness.

6. Take time to reflect on your own traditions.

Regardless of your own religion, faith or philosophy—surely there are times of the year that are sacred and meaningful to you.

Perhaps take this time to “check-in” and and see if you are carrying that feeling of goodwill, charity and compassion with you throughout the year, although your celebratory time may have been months ago.

Remind yourself how much you anticipate special times with family, the arrival of sacred rituals and how at such times you deeply immerse yourself in your faith. Reconnect with family and friends that you may have lost touch with since your last holiday.

In the US, the media tries to divide us as people each year by declaring that there is a war on Christmas and the words “Merry Christmas” are becoming forbidden.

I believe that people to people connections are stronger than that.

Everyday I see people of different backgrounds reaching out to one another and freely expressing their faith. I refuse to let the media tell me that we all can’t get along and celebrate the diversity that exists among us.

I have seen Muslim students performing Christmas songs at my daughters public school.

In addition, I can speak from personal experience, that before converting to Islam, I received Christmas cards, gifts and many “Merry Christmas” greetings from my Muslims friends. In that same act of good will I hope that you will graciously greet your Muslim friends with a heartfelt “Ramadan Mubarak.” And say it with a smile.

“Our Prophet taught us that smiling is a form of charity. But how widely you smile, how genuine it is, what it means to the one being smiled at, etc. all determined how much that charity is worth. Make your smile worth a million good deeds”

And if you are a Muslim, I trust that you will be as warm and embracing to anyone seeking knowledge about Ramadan, as the Muslims who I turned to last year for my first Ramadan.

Let’s all seek a better future—one that honors the diversity that exists among us and the threads that unite us.

Surely, the more we learn from one another the more we can come together and realize the oneness of humanity.