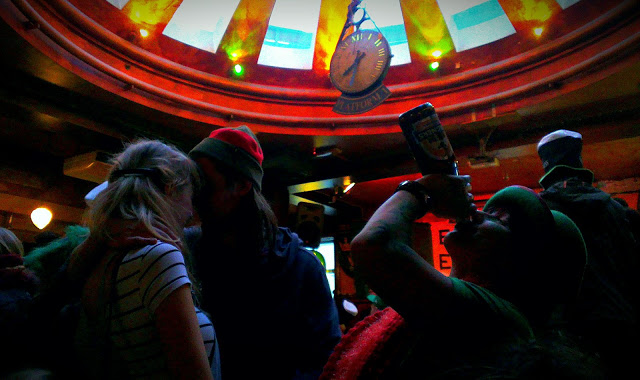 Alcohol is the most consumed mind altering tool in society today. And it’s no wonder, legally it’s basically all we’ve got to work with.

We live across from a pub and nearly every week without fail we’ll hear two or more people dribbling in an ego duel of discourse. It will then usually escalate into a violent exchange, although due to their diminished capacity, it doesn’t end up that violent at all. Its actually quite funny if you embrace it for what it is. Dance monkey dance.

But that’s just one side of the story, so let me be clear: I love to get pissed. Hanging out with my best mates whilst getting drunk loosens our minds which always results in comedy, connection and insight. Some of my best times are in that place, so it’s simply a lifestyle that I’m always going to choose to do.

Fortunately though, I’ve managed to evolve my use of it close to a respectable level, but it hasn’t always been that way. Most people lose their shit on it at least once, if not many times. Without proper education of altered states in our classrooms, we’re destined to be wandering through the dark shadows of this potion until we each learn the wisdom of its light.

That goes for all types altered states as well. We not only perceive but think, feel and act differently depending on the chemical concoction inside of us, no matter if it was consumed or made from within. Some states are strong and others are subtle.

Marijuana is a much better substance for an angry, disconnected and ego-based society. For starters, it’s notorious for making us face ourselves through uncovering our internal truth and lies. Basically zero people die from it and very few fight on it too. It has many medicinal applications. The personal and social benefits far outweigh the disadvantages, yet it’s still mostly illegal.

The medicinal benefits are only now being publicly realized. Belatedly, it’s finally beginning to be accepted in the Western world with two US states now legalizing it for recreational use, and over twenty who have sanctioned it for medicinal use.

Nevertheless, the powers that be have strictly restricted how we can legitimately explore our minds.

But what else can we expect when we are in a war on consciousness: be a productive economic citizen, believe what we say, don’t believe others, consume material goods, science is your god. The only altered state that we consider acceptable is a mix of sugar and alcohol which may result in aggression-fueled mania. Good luck, each man for themselves. And by the way, if you try anything else, we’ll label you a criminal.

There’s little worth in the education of alcohol as well, because most of it misses the core of the issue. Yes, the individual needs to have a crack at life, but the problems associated with it stem from a social existential crisis. Our community heart beats in despair and tears.

Alcohol is only a fragment of this issue—there are many ways that we alter our minds in dysfunctional ways. For what it’s worth though, we do have good intentions.

Love, lust and other emotions are powerful elixirs that can either fuck an individual right up or empower them on their journey of enlightenment. These animal traits alter our minds more than what we actually give them credit for. We literally have free highs waiting for us on the inside.

Food is probably the biggest addiction in society but it doesn’t have the powerful mind altering qualities that other substances have. Nevertheless, a huge proportion of the population have been dysfunctional and unhealthy eaters for nearly their entire lives. Seriously, get a real habit.

Now don’t get me wrong, obviously we all need to eat; yet living in an obese Western world is an ironically immature consequence of “civilized society.”

Then there are the ridiculously harmful pharmaceutical drugs, as well as the unregulated and criminalized market of recreational drugs. No matter what, there’s a pill to pop, regardless of whether you’re playing victim or hero.

As naturally inquisitive mind expanding creatures, humans will always seek out ways to break apart the boundaries which are conditioned by our environment since birth. It’s inescapable. This truth will one day reach critical mass and a regulated and educated substance market will eventuate as the key to assimilating this birthright into a reborn society.

It’s fucking backwards as any other way.

People also love the fantasy world. The imagination is the realm of art and dreams. That’s why all the stories and images constructed by the entertainment business have been getting people drunk since its inception. It’s so successful that consumerism has been amplified by an image-driven and ego-based society. There are even magazines that dedicate their stories to intruding on the lives of those who contribute to the industry. Yeah I know, how sad.

Therefore, it isn’t just alcohol that society is drunk on. Food, sex, drama, love, celebrities, image and technology all have their ropes tightly bound in a noose around society’s neck.

And when I say go home, I mean back to unity. Even though there is still a huge proportion of religious followers on Earth, many remain spiritually poor like their fellow materialists. Some give up their power to a twisted conception of an external “God.” Some pray outwardly instead of within.

Without an actively conscious connection to the core, society in general has gone raving mad for centuries. This includes war, fragmentation, greed, racism, bigotry, prejudice, arrogance, hostility, anger, depression, etc. These are all symptoms of a disconnected society and we’re living right in it.

It wasn’t always this way though, we should pay more tribute to the old school. So often tribal society nailed it and our recent generations have been awakening to the sacred arts too, thank fuck.

That’s why I am an advocate of altered states, both of mind and body. It’s a normal human experience, we even explore our minds in our dreams. Done the right way we can use our parallel mindsets to grow ourselves, such as, with the method of meditation.

Ever since we were kids spinning around until we fell over in bodily malfunction, we have searched for an altered reality. It’s simply a natural human quest, so whilst we do it, let’s make sure we keep it balanced for the health of ourselves and our community.

But for the ultimate altered reality, the one that we seem to be deeply searching for, generally we look towards God. It is assumed across mainstream religious and scientific circles that God is external, and this has been a major misconception that has led to the increased loss of our spiritual riches. Once we started to conceptualize God, instead of just being it, we raced further away from the place which all energy is sourced.

Yet, it’s not all despair, there actually is a solution. Looking both within our minds and without to nature, we will find a symbolic dance which is interconnected to the source.

This is the new and old black in spirituality.