“How Can I Possibly Be Inconspicuous When My Flow Is So Ridiculous?” ~ Anne Samit

How can I possibly be inconspicuous when my flow is so ridiculous? ~ I’ll Be Around, Cee-lo Green

I was at an evening yoga class with a guest instructor who arrived with a great big welcome, his greeting warming the room and his smile inviting many in return.

This is a Level Two class, he announced. So, what would you like to work on?

He asked us what we wanted and got us laughing when we answered, promising us a high energy class and lifting us with that of his own before landing the room in a quiet meditation with a poem and a chant.

I was happy to be there, sitting next to a friend who was leaving town and among others I knew as well. I felt cozy as evening fell outside the windows, darkening the room in a stillness filled with the rhythmic voice of the instructor.

I didn’t really take in any of the poem or understand the chant; rather, it was as if the sound of his words blanketed my busy thoughts, tucking them away for the night and settling me into a stillness usually found in the final resting pose of Savasana.

It was as though we were starting at the end, and then what followed was the middle!

The instructor popped up from his seated position, turned on the music and moved us directly into Boat Pose, a pose that works on the abs and is usually found halfway through the class. After more ab work, we moved into an early Crow, balancing on our hands with our knees tucked as high above the backs of our arms as possible.

And then we started to flow, and he even threw in a few handstands between warrior poses. He danced to the music and bounced around the room, adjusting us here and there and singing along, too, as his energy lifted us again before landing the room in the quiet of Warrior Two.

And there we held the pose.

With the others, I settled again into stillness, but this time with much more effort as he implored us to take the pose even deeper. He ran through a checklist, asking us to see every part of our body as he outlined the view of our arms, our legs, our bellies, our muscles and more.

There is something about expending lots of energy while being still. Somehow, everything seems to make sense in the stillness, like understanding the words to a chant with no knowledge of the language.

And it’s in this way that I saw myself as instructed, and I at once remembered an astrologer telling me the stars were such that I should walk the King’s Highway. When I asked for an explanation, I was told that I was not to sit on the side, that I was meant to be seen.

My muscles were working hard, and I felt so alert that it seemed as if I could see out of every pore. And I was so still that I found myself strong enough to look at my blind spots and to understand that it’s okay to be seen. I even pictured the back of my knee.

We held the pose still longer, and the energy was as high as we had been in our handstands earlier in the practice.

I want you to do this pose as if it’s the last yoga pose you’ll ever do, he said.

This brought some giggles to the room, but he held his ground in much the same way as we held the pose.

Seriously, he said, countering with his smile. This could be the last time you’ll ever do yoga. There is no tomorrow. 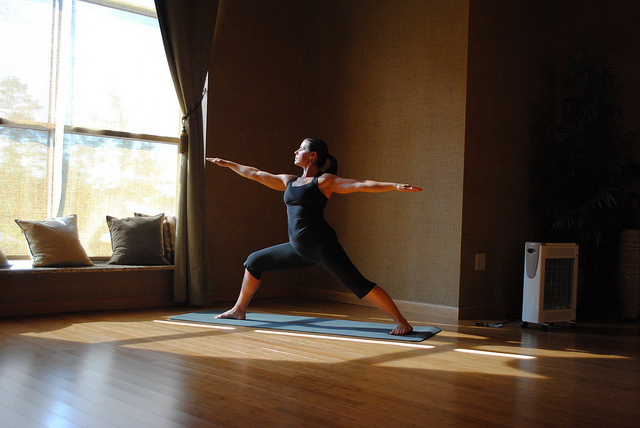 And so there I was, standing still in what turned out to be the Just Now, where nothing is hidden if you are brave enough to look. It was a liberating place to be, among my fellow warriors with no tomorrow, doing all that mattered in the moment, and seeing all of myself from the inside out.

We broke the pose and flowed once more, the music never having stopped, and the instructor continuing his beat around the room, singing and dancing and asking us to see ourselves, and somehow getting us to do just that by sending us from stillness to flow to stillness to flow.

Soon after, we moved into reverse side angle. I stepped one foot in front of the other and twisted to my left, placing my right hand to the mat and reaching the other to the ceiling. And as I turned my torso to the side, my eyes passed the window, and I saw a single star, like an eye in the sky blinking back at me.

I gazed at the star, and it stared back, both of us seeing the other in the clarity of the stillness that was the Just Now.

But before I knew it, the flow was upon us again, and I averted my eyes, flowing all the way to the end of the class, until the room finally settled into its sweat and its breath and another poem and another chant.

And I lay there in stillness against the rhythm of the words, and I felt free in the bravery of being bare enough to be seen by even me.

And so when I left the class, I thanked the instructor and, although I know he knows there’s no tomorrow, I asked him to please come back again as if there was.