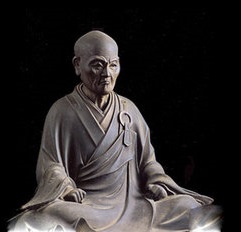 The Fierce Zen of Suzuki Shosan. The Samurai who became a monk.

“To learn to be always in a state of meditation means never to let your vital energy wane. You would never allow it to do so if it were certain that you were to die tomorrow.” ~ Suzuki Shosan

In Japan in the 1600s, a well known samurai retired at the age of 40 because he wanted to learn Zen.

He served under Shogun Tokugawa Ieyasu and it wasn’t until right after a decisive victory that he asked to be released from his samurai duties.

The Shogun allowed it.

He decided to live the life of a wandering monk. He traveled around Japan studying under different Zen masters. He spent a lot of time studying Zen history and he was really inspired by the stories about a certain iconoclastic Zen teacher from a couple centuries earlier named Ikkyu.

Although he spent a great deal of time studying with a teacher named Daigu Sochiko, he never received Dharma Transmission.

Suzuki Shosan declared himself Enlightened. And he didn’t even change his name to a Buddhist name.

Now, this might sounds scandalous: self-declared Enlightenment? Surely that couldn’t happen then or now!

Well, it did. It actually wasn’t all that rare at that time. Here in the West we sometimes think of Dharma Transmission as something really special. And it is, or it’s supposed to be.

But during Suzuki Shosan’s time the Zen community was very political. There was a thing going on that is sometimes called “Temple Transmission.”

That’s when someone is given Dharma Transmission, declared an Enlightened Master, for political or expedient reasons. It was one of the things that Shosan’s hero Ikkyu had condemned in the Zen establishment.

Not only that, but some temples were known to give Dharma Transmission for money, the same way diploma mills sell PhD s today. We don’t like to admit it, but this kind of thing happened.

The Dharma Transmission system is great. It has served us very well. But it’s not perfect. Because nothing that involves human beings can be perfect.

Not only that, but most Zen temples were, to a greater or lesser degree, connected to the Japanese government, which could be good sometimes and bad at other times.

Sometimes it seems like Zen history has two tracks.

Temple Zen is full of monks that live in monasteries and chant and meditate and memorize sutras all day.

Renegade Zen is full of people that challenged the establishment, that thought of things in new ways, that weren’t afraid to innovate.

The renegades: Dogen, Rinzai, Ikkyu, Huineng…these are the ones that we remember. There is an iconoclastic current at work here.

Anyway, Suzuki Shosan declared his own Enlightenment because he didn’t want to deal with politics.

(No, I’m not going to do that. Thanks for asking.)

At this time in Japan this happened sometimes. He was not unique. Although he didn’t bother with the temple system for certifying his Enlightenment, he also didn’t go around criticizing the temple system. I think that’s an important point.

Anyway, even though he wasn’t a “good” Zen Master, I still think his teaching can be useful to us.

He taught something that he called Nio Zen. 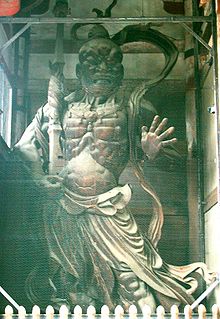 The Nio are those scary looking figures that stand outside of some Zen temples in Japan.

They are supposed to be these demon guardians that protect the Dharma.

Shosan told his students to visualize the Nio in meditation, to help them channel energy and vitality. He believed that the fierceness of the Nio could help us conquer the three poisons.

He also told his students to be ready for death at any moment, as a way to strengthen present moment awareness. This, it is thought, was inspired by his career as a samurai.

There was a pretty popular view in Shosan’s time that to attain Enlightenment, one had to separate from the world. If not actually become a monk, at least spend a lot of time alone. Shosan didn’t believe that. He thought that the message of Enlightenment could and should be brought to everyone at all levels of society. If Buddha nature is our true nature, then anyone should be able to attain Enlightenment, from the most high level monk down to the lowly criminal. Although he lived the life of a monk, he specifically told people that they didn’t need to, that Enlightenment was already available right here in this moment.

Suzuki Shosan built 32 Zen temples, which is in itself and incredible achievement.

He left behind a book of teachings called “Parting the Grasses at the Foot of the Mountain.”

He wasn’t a ‘good’ Zen Master, but I like him. He was more worthy of the title than many people who receive it in the official way.