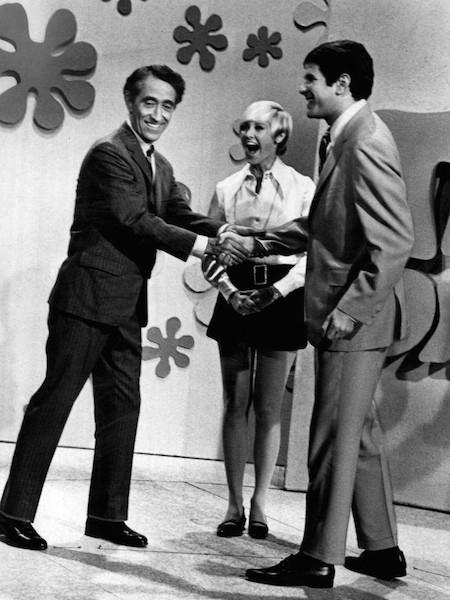 I always thought of myself as being incredibly strong. I ride a motorcycle, I always stand up for the underdog, and I never wince during a bikini wax. But when it comes to sharing what is in the wells and valleys of my heart, I am like a god damn marshmallow.

There is a reason for this dichotomy. I didn’t grow up in an environment where I had a safe place to be emotionally vulnerable. I’d wager that the majority of us do not. So to be able to croak out phrases like, “I need help” or, “I love you” to someone that matters takes battalions of inner strength. But it takes even more courage to say the words and not be tied to the outcome, or the carrot. Uttering the words is the lesson and end, in and of itself.

2. Kind should be his first attribute.

We all have a list of things in the back of our minds of we think a boyfriend should be: funny, smart, stable, attractive. But since what we’re really looking for at the end of a date is a safe place to call home, the heart­, like a five-year-old who holds your hand simply because­, needs––above all else––to be treated with kindness.

3. One day he will treat you like the waitstaff.

I went out a few times with a guy who, while adoring and attentive to me, was short with our waiter. He never said thank you or looked him in the eye. It was if my date was Cleopatra, and the waiter was simply there to wave him with a palm leaf. And it bothered me.

Then about a week later, we got together after work. He was in a bad mood after a long day, so I offered to pick up dinner. His retort was short, brusque and entitled—just as he’d been with the waiter. You can tell a lot about a guy by the way he interacts with his mother and the elderly. But pay particular attention to the way he interacts with people in the service industry, because when he’s feeling off his game, that’s how he’ll treat you.

I used to think that having intense chemistry on a date meant it would then spill into the bedroom. I discovered this wasn’t this case after a three-hour dinner wherein my date and I couldn’t help but finish each other’s sentences while staring longingly into each other’s eyes.

When we got home, buttons went flying, we fell into each other’s naked embrace, and proceeded to have sex that felt like a symphony playing without a conductor. While our emotions and communication were in sync, our bodies were most definitely not.

I can’t speak for every woman, but for me, sex is not like pizza—meaning, it’s not always delicious. If it’s not akin to a glass of well-aged Rioja—spicy, tantalizing with a good, strong finish—then it’s just better not to have it at all.

The scenario where I’ve been making eyes with the man and he walks over asks me out has never happened. Not once. And it hasn’t been for my lack of staring. This, however, is a good thing. It shouldn’t be easy for a guy to ask me out. If he thinks I am just about the best thing he’s ever laid eyes on, he need to be nervous to ask me out.

So if I want him to come over, I have to help him by initiating a conversation, laughing at his jokes or subtly touching his arm—letting him know, whether he takes me to his favorite 24-hour diner or for a ride on the back of his lime green, vintage Vespa, I’d love to be his date.

6. Drama is for thespians.

Drama is not actually an emotion. It’s a dimension that teenagers live in from sunup to sundown and adults create in order to live out a more heightened existence.

His volatility, jealousy or temper isn’t a show of affection or love, it means he is not capable of having a healthy, grounded relationship. So unless you’re actively in pursuit of the Burton-Taylor Award or your own reality show, then it’s best to leave the drama to the people who went to school to study it.

I think this one is pretty self-explanatory.

8. You can never say the wrong thing.

A boyfriend took me to a party at his friend’s house. It was the “meet my new girlfriend” date. I was my charming and cordial self, kept it light, made a few jokes, and then I put my hand on his friend’s stomach and asked her when she was due. She replied that she was not pregnant. Oops…

Not an hour later, we were talking to his best friend and I mentioned how cute it was that he’d brought his daughter to the party. He replied it was his wife, and they were, in fact, the same age. I asked my boyfriend if we could leave shortly after that second doosie, and proceeded to apologize profusely for insulting his friends.

He said that he found the whole thing hilarious, and the way I always call it how I see it is what made him like me in the first place. And then we made out. I still find it miraculous that the things we try to hide from people we want to like us—nuggets of shame, secrets too cringe-worthy to tell, traits that makes us achingly self-conscious—are, when we do reveal them, the very things that make people like us.

9. Everyone has baggage. But some people have luggage.

In my 20s, I didn’t understand that the power struggles and fights I got into with my boyfriends were because of emotional baggage we’d both carried with us into adulthood. But after some therapy and spending an inordinate amount of time in the Barnes and Noble self-help section, I finally got to unpacking.

Don’t get me wrong, I still have baggage, but now at least I know how heavy it is and what it looks like coming down the airport carousel chute. So it’s important to consider, given the weight of your own, whether it’s in your best interest to date someone with an entire matching set of Louis Vuitton luggage.

10. You are the love you’ve always wanted.

When I turned 30, I felt as if I’d finally climbed my way to the peak of a huge hill, only to look up and see that I was actually at the base of a much larger mountain. I was just beginning my life as an adult and had a whole lot more to learn.

This was especially true when it came to relationships, especially the one I realized I didn’t have with myself. When I set some time aside and became my own best friend, an interesting thing happened: I stopped thinking about when I was going to meet “the one” because I was in the process of making myself deliriously happy.

As I began to live a higher quality life with myself, I began to attract people (and men) of real quality. Some might call this the law of attraction, but I think it’s far simpler than that; I finally learned to love myself the way I wish to be loved.