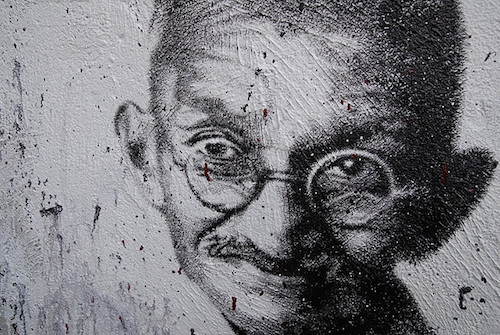 Patanjali’s Yoga Sutras laid out a system of yoga often referred to as the eight-limbed path.

Each limb focuses on a particular aspect of spiritual evolution. They are also interrelated and, indeed, the striving towards fulfillment of each aspect of the system creates fertile grounds for spiritual growth.

The first two limbs of Patanjali’s system have to do with the Yamas and the Niyamas. If you’ve been practicing yoga for any amount of time, you may have come across these moral precepts.

As a way to better understand these various moral codes, I decided to take the time to delve a bit deeper into each Yama and Niyama. This is important, I feel, because the Yama and Niyama are a wonderful gateway into a deeper, more enriching yoga practice outside of the physical asana (posture) sequences we experience in class. It’s one more way (a big way) that we can take yoga off of the mat and into our lives to help us live more fulfilling lives.

So, up first: Ahimsa!

Ahimsa, the first Yama, translates to a variety of terms, chief among them being non-violence. It can also signify compassion, understanding, loving-kindness and self-love in words, thoughts and actions. It’s easy to see how all of these other meanings stem from the main one of non-violence.

According to Swami Sivananda in his book Bliss Divine,

“Ahimsa or non-injury means entire abstinence from causing any pain or harm whatsoever to any living creature, either by thought, word or deed.”

Wow! That’s intense, right? He then goes on to describe that Ahimsa is broken by:

Thus, we commit himsa, or violence, when we physically harm ourselves or another in action, thought, or word. What a practice to undertake! Especially out in today’s world in which people can be so disconnected from one another and sarcasm runs rampant.

Ahimsa stems from the Hindu idea of Karma, in which any action, thought or feeling directed toward another will come back to the issuer either in this lifetime or another.

This is all well and good, but what if you don’t believe in reincarnation? What if you find it fun to gossip about your co-workers or the people sitting next to you at the restaurant, on the subway, in the bar?

We all may know that these actions aren’t helping us any and potentially, are dividing us from others. It’s easy to understand the concept of non-violence, but how do we go about practicing it in such a way that doesn’t overwhelm us? Turns out the yogis have an answer for that dilemma as well.

How do we practice Ahimsa?

Live a non-violent life. Sounds easy, right? Simple! But, I bet, if you were to take one day and notice all of the injurious actions, thoughts and emotions going on inside of you and around you, you’d be amazed: “I’m too out of shape. I’m not good enough. That guy just cut me off in traffic so I’m going to cuss at him. That girl looks super silly in that dress. What is she wearing? Ugh, look at that hipster.” And on and on and on. It’s simply amazing!

Also, overwhelming, right? But it doesn’t have to be. As I mentioned earlier, treating Ahimsa as a dogmatic rule is not the way to go. This might lead to feelings of helplessness or frustration as you inevitably fail. Failing, though, isn’t a bad thing as long as you learn from the failure, you own it and then get back to practicing.

The idea is to practice Ahimsa gradually, which is accomplished in two main ways:

Realize that it is impossible to escape violence of some sort in your day-to-day life (things have to be killed to be eaten, for example, or you may need to defend yourself against a physical attack), so negating all violence is practically impossible.

A better approach is to first notice all of the violence that you do experience in your actions, thoughts and emotions and then slowly, bit by bit, work at chipping away at this large mass of violence present in your life.

Additionally, as a correlation to the previous practice, start by trying to control the physical body first. Notice and then stop, as often as possible, any physical harm that you do.

Then, work on speech. Maybe set an intention: “I will not speak any harsh word to anybody,” and practice for 10 minutes, then 20, etc. Slowly work the Ahimsa muscle.

Finally, work on noticing and then ceasing injurious thoughts. You will fail 100 times, but maintain your intention of small, incremental adjustments. Treat yourself with loving-kindness. Realize that, as Swami Sivananda says, the “One Self dwells in all. By injuring another, you injure your own self.”

Ahimsa, or non-violence, is the way of loving compassion. It is approaching all situations and all people in a whole-hearted way. This takes courage and unspeakable strength. A willingness to witness all of the injury and violence (gross and subtle) we cause ourselves and each other on a day-to-day basis and then slowly whittling away at that mass.

This is the practice. This is my practice. I invite you to take on Ahimsa for the next couple of weeks as we delve deeper into this Yama.

For now, though, how does violence show up in your life? How much of it do you notice? What kinds of himsa are you working to let go of? I’d love to hear from you in the comments.