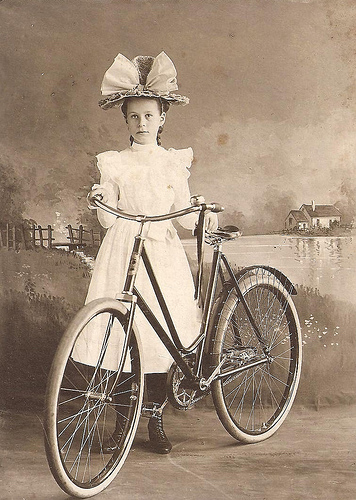 Forget inattentive drivers, unaware pedestrians and those crazy scooters that don’t subscribe to the rules of the road or the sidewalk, because back in the 19th century “Bicycle Face,” at least for women, was the most dangerous thing about riding a bike.

This is how Wikipedia defines Bicycle Face.

It was argued the bicycle face resulted from continued strain to keep the device balanced while being ridden. Critics of female cyclists characterized the bicycle face as including bulging eyes, and a tightened mandible. The bicycle face on women was seen in direct contrast to the “tender and loving gaze” men expected from women during the time period. In addition to bicycle face, physicians warned of maladies caused by cycling including tuberculosis and increased libido.

I have to say, if that’s the definition of Bicycle Face then the BF lives on.

I experienced it just today as I was carrying a heavy load of groceries up the stairs. Then again as I was trying to calculate this month’s spending budget. And yet again while I was trying to decipher what, one of my more adamant two-year-old-Japanese-speaking students, was trying to tell me.

Seriously. This s*** is everywhere!

As far as I can tell Bicycle Face symptoms include:

The term was apparently coined by A. Shadwell, a British doctor who warned against the dangers of riding a bike, especially for women.

It seems it was accepted that Bicycle Face could effect anyone but women were significantly more susceptible. It’s implied in several publications that because we are “unbalanced” by nature, it would be significantly more difficult for us to be expected to “balance” a bicycle. This inability to balance the bike combined with our inherent worrying nature is supposedly the root cause of the dreaded Bicycle Face.

In an effort to back up his theory A. Shadwell states:

Has anybody ever seen persons on bicycles talking and laughing and looking jolly, like persons engaged in any other amusement? Never, I swear.

In reality the bicycle was a pivotal part of the Women’s Movement. For women, the bicycle was not just another toy, it was a means of transportation. It gave them mobility, freedom and independence. It also, inadvertently changed the traditionally conservative (and let’s face it, hot) dress code. We just can’t be expected to ride a bike in those long, loose dresses.

So here’s to the bicycle, thank you for paving the way for women everywhere.

In the name of the Bicycle Face, ride on sisters (fist pump)!