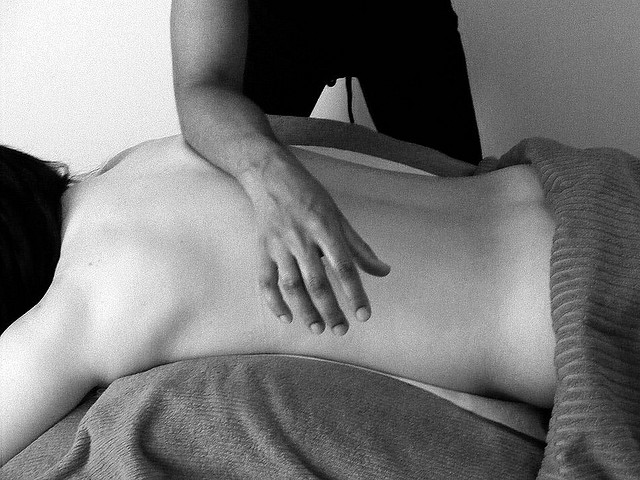 “Do you mind if I do the breasts as well?”

I was travelling in Nepal and responded to a flier on a café noticeboard offering free massages from an Ayurvedic student. Why not?

An ex-pat hippy picked me up on his scooter. He looked like a Rolling Stone and said he was the former headmaster for an international school. We sped through the outskirts of Kathmandu to his house where he cranked up the heat, whipped off his shirt, and donned a Pat Cash sweat band. “I like to be comfortable,” he explained.

After a while he asked me to roll over and commenced that painful quad kneading, before working his way up to the chest region. “Is that ok?” he asked. “There are a lot of important glands around there.”

This should be weird, I thought—yet it took less than a second to say yes.

The rest of the massage was notable if only for being so surprisingly un-awkward. I recommended him to friends, who had similar experiences, and we laughed at how ‘weird but not’ the whole thing was.

I’ve often wondered what it was about that therapist that gave me a sixth sense to trust him. It wasn’t just that he didn’t pull any moves (other than breast-rubbing), it was that his complete lack of ill intent came through as clearly as his bad taste in sweat bands.

If you work in any kind of ‘touch-based’ capacity, such as personal training, massage or yoga, the line between appropriate and inappropriate is fairly obvious.

And yet we have a complicated relationship with touch. On one hand we’re hard-wired to crave it. So why do we sometimes feel awkward when it’s part of a service? As a professional who uses touch as part of your work, how can you keep your clients comfortable, without succumbing to paranoia about boundaries?

As a yoga teacher, most of us have had moments where we’ve accidentally poked a boob or had students head-butt us in the bum. Occasionally awkward, but you laugh it off. It’s like flatulence in a lift—not acknowledging it is worse.

In my experience, the difference between creepy and non-creepy basically lies in a practitioner’s ability to own their own sh**.

If you can show up to your own fluctuating needs, desires and messed up emotions (irritable? blissful? attracted to the model/actor in the second row?), you’re less likely to pass them on to your students. If I’m feeling scattered I won’t touch students, because I want to either approach a hands-on with confidence, or not at all.

Having said that, I constantly have to remind myself that not only are some people not comfortable with touch, they may not be confident in saying so. Fortunately, you usually get a sixth sense when students prefer you to back off, though preferences fluctuate.

I wonder, though, if we sometimes feel awkward because we actually enjoy physical contact more than we think we should? I love having my hair combed at the hairdresser—it switches my brain off more than any meditation. But I’m never comfortable closing my eyes and luxuriating because I’m paranoid they’ll think I’m indecent.

A friend of mine had a similar experience when she was on a yoga retreat. “There were lots of group exercises with incidental touching, and I didn’t realise how much I missed that male energy until I had it. There was nothing at sexual about it, and I also enjoyed that contact with the women. But part of me was thinking ‘Is it weird and wrong that I like this so much?’”

Very occasionally, people can mistake physical intimacy for emotional intimacy. God knows I’ve done that myself as a student, and you don’t always realise it’s happening. You’ve got this nice person in front of you who’s helping you experience yourself in a lovely way, and if you’re already vulnerable it’s easy to get confused.

While it’s a privilege to be able to create space for someone emotionally, as the practitioner, it’s not hard to gently reinstate boundaries without embarrassing anyone. The trick is to recognise it’s not personal, and guide them back to their own resources without paying too much attention to ‘their story’.

So what if you’re the client and feel like a boundary has been crossed? We so frequently choose to avoid ‘confrontation’. Did I imagine that? Maybe it’s ‘my’ problem.

A friend of mine was ‘accidentally bumped’ by a massage therapist’s penis several times in a session. She doubted herself, but later she was so annoyed that she hadn’t said anything that she vowed to speak up in future. “Then recently my chiropractor made a sex joke and though I’ve seen him for years, it made me uncomfortable. So I told him so.

He got it, and apologised and it felt good to able to address it in a straight-forward way rather than never booking in to see him again.”

You do not need to justify your discomfort—if a practitioner has a problem with you saying ‘Do you mind not doing that today,’ then they have a problem, not you. But you do have a responsibility to communicate clearly. It might feel awkward, but ultimately it’s so much easier when you know a student is capable of stating their boundaries because you can then get on with your job without second guessing.

Unfortunately, as teachers and practitioners we don’t always get it right.

Culturally, we’re not always great with boundaries. It seems we’re either transgressing them wildly, or else we’re so paranoid, we build psychic forts around ourselves, starving ourselves of contact.

But there is something humbling and wonderful about the care that comes through compassionate touch from people with whom we don’t have a pre-existing emotional bond. Uncomplicated by expectation, it’s the kind of touch that says you’re worthy of care, because you’re human.