The Beauty of Abuse. 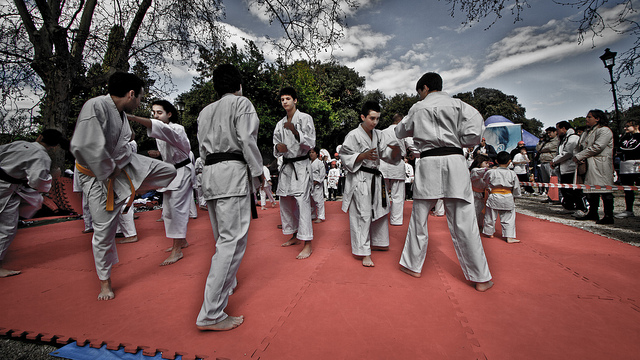 Sometimes even the best sounding ideas can go horribly wrong.

Many years ago I went to a Martial Arts Convention in Pasadena, with a friend. At the time, conventions such as Comic-Con, writers conventions, and wedding expos were starting to take off, so convention centers were looking for fun and exciting ways to bring people into their buildings—and then take their money.

This is where the first ever Martial Mayhem Fighters Expo came to be.

There would be seminars from famous fighters, tons of new training equipment to buy, and they were even holding the world premiere of the film, Dragon; The Bruce Lee Story there.

It was a nightmare. It turns out when you put a few thousand fighters together, they kind of want to fight with one another. Who knew?

There were a lot of non-martial artists there who stood out like the people who go to Comic-Con and don’t know who Superman is. Dates, media personnel, vendors, booth babes, and people just looking for something different and fun to do with their weekends, wandered aimlessly among Black Belts, MMA fighters, Military Close-Combat experts, and Law Enforcement instructors.

Throughout the expo there was this silent auction going on that would benefit Chuck Norris’ Kick Drugs out of America program, but most of the things they had to bid on were fairly cheesy. Autographed head shots of Jean Claude Van Damme, as well as screen used Teenage Mutant Ninja Turtle pizza boxes were among the items people could bid on. Needless to say the auction wasn’t exactly making a ton of money.

Then Eric Lee showed up with a particular item that changed things.

For those of you who don’t know who Eric Lee is, I’m sorry. Eric Lee is a Kung Fu master and a weapons God. His specialty is something called a three-sectional staff, which is easily one of the most difficult weapons to master—yet Eric Lee makes it look easy.

So Eric Lee walks into the auditorium with his one of his personal three-sectional staffs, and puts it on the auction block.

This caused a rift that separated the true martial artists from the posers in the most interesting of ways.

This weapon that Eric Lee brought in, was old and obviously had been very used. Parts of it were held together with Duct-Tape, and the sticks were cracked and splintered. The varnish had long since been worn off from the constant use, and it had more dings and scratches in it than I could count.

I quickly placed a bid for $300, knowing I would never win but just wanting to be a part of the action in some way. My friends date saw me place my bid, and asked me why I would waste so much money on a piece of junk. “I mean, it’s not even new?” She had said. She completely freaked out when the weapon sold for $3800, and was easily the item that brought in the most money for the auction.

There are many martial artists I’ve seen who have these weapons collections where every piece is in pristine condition, and usually hidden away in a protective case. It makes me crazy.

Nothing screams ‘I never practice’ like new weapons or clean sparring equipment.

These are the same type of people who buy action figures then keep them sealed in the box because they are afraid the figure will lose ‘value.’

There is a beauty in the things we utilize.

The only way to keep a blade razor sharp is to drag something along its edge every once in a while. I love seeing things that have been hammered with use and obvious love. For example I had a friend who was getting ready to go on an LDS mission and one day I saw his copy of the Book of Mormon. It had dozens of color coded tabs, highlights, notes in the margins, and it looked like the binding might fall apart at any second.

One of my all-time favorite possessions was this punching bag I got for Christmas one year. My mom bought it at Sears for around $80, and that thing hung in my garage for years. By the time it finally fell apart, I think it was more Duck-Tape than Canvas.

Embrace your scars, your stretch marks, your emotionally damaged heart, and all the other ‘flaws’ you have. It means you’re being used, and I would much rather be the hammer that is always readily available in the tool belt than the one forgotten about in the tool box.