The Day My Life Changed Forever. On the evening of April eighth, 2014, I sat on the couch after work and errands waiting for my husband to return from a baseball game.

We each got a message from my mother who explained to call as soon as possible, it was an emergency.

My healthy and fit sister Melissa (42) had been found outside by the track of her daughter’s lacrosse practice, having collapsed while jogging.

The rest of that night was a blur of confusion and racing thoughts. In the morning I thought in the back of my mind it would have been something like low blood sugar and that it would all soon be over. They would run a series of tests and get to the bottom of it.

After I got the call from our other sister early the next morning that the MRI found there was swelling on one side of Melissa’s brain, I realized that this ordeal had just begun.

The next 48 hours were so painful that I cannot even recount them as of yet. In a stricken whirlwind, I flew back to my home state of Maryland from Chicago where I was living.

Later we learned my sister had a series of severe brainstem strokes. Strokes? None of us had any idea about strokes, except that they happen to older people—or so we thought.

Stroke is now becoming more common among the younger population and women. While reading about stroke prevention and causes, it baffled me because Melissa did not fit the common list of pre-existing symptoms of being at risk for stroke.

She had no typical medical symptoms or strong family history, she ate well, did not smoke, exercised often, took care of herself and her family. It didn’t make sense.

Since April eighth, Melissa has fought tirelessly to regain her movement, daily functioning, and independence. Twelve weeks later, my sister is improving daily through intensive rehabilitation therapy. Although at first she was unable to move, she is showing all signs of rehabilitating with determination of an Olympic athlete. It is a lesson in patience and faith put to the ultimate test. I wish one day we would wake up and she will be the same person, the way we’ve always known. Instead, almost as you await a child’s first word and step, we anticipate Melissa’s complete return to us. If anyone is strong enough to endure, it is my sister.

We all walk humbly, unconditionally and lovingly beside her in the meantime. Melissa has made so many strides and is improving, slowly but surely. Beginning in the ICU and unable to move, speak or eat, she is on her way to overcoming this battle.

When and if you find yourself in a challenging time, here are a few coping mechanisms:

No matter just how distressing the situation may seem or actually be, while remaining optimistic, you will not only elevate your own well-being, your energy will prevail over anything unconstructive. It will support everyone involved in the situation too. We all need the good vibes!

Understand that you will no longer have the same relationship with some friends and/or family as you once did.

I noticed that I felt further from those people I felt closest to before and then closer to those that I never had a strong relationship with. Be prepared for all of your relationships to shake and rumble, including the one with yourself. You’ll gravitate to certain people and others you will push away—or will do the same to you. Just accept it for now.

Get out and start moving.

That includes exercise, yoga, and meditation. It’s easy to sit around and mope but as soon as you make an effort, you will feel better. Keep your schedule and go about your daily routine. It can be so challenging. Simple things have been so burdensome for me. Something as undemanding as having to clip my nails is so wearisome. I keep thinking, once my sister is better, I will clean the bathroom floor, and so on. You just have to keep going, even when you can’t.

It’s okay to feel how you do.

It’s normal. Let your feelings come and go. Try not to cling to any of them or push them away.

Despite your sorrow, remain grateful.

Things can always be worse so be thankful. You must still count your blessings.

That day changed my life, the life of my whole family, and I would venture to say the lives of many loved ones. My husband and I had moved over five years ago to Chicago from Washington DC. Within one month, we moved back to the Baltimore/Washington area in order to be closer to family. I can’t imagine it any other way. One day before this happened we would never have thought or known everything would no longer be the same.

Melissa has taught us all so much in her own courageous and beautiful manner. To be present, fearless, strong, brave, positive. To surrender in the face of adversity and pain, with an open heart and determined mind. I have always admired my sister. Never a negative word to say about anyone she has ever encountered, always upbeat to be around, fashionable and fair. Far better than I am.

Whenever I would say goodbye to the family and head back to Chicago, I’d always choke up with tears when I got to Melissa. Now, whenever I leave after my weekly visit, I feel the same way and know now that I’ll never leave her side for long again!

Our family is in awe of the generosity shown by so many friends and family. Melissa is loved by many and all. She has a loving husband and two amazing children, seven and nine. Countless people’s lives have been touched by Melissa’s good nature. Melissa is a gem and a rarity in this world. Melissa has so many interests and talents, from her business in fashion films to yoga and fitness training.

Melissa is a fighter! Please take a moment to view one of the Give Forward pages in her honor. All proceeds go toward therapy and Melissa’s stay at her facility. 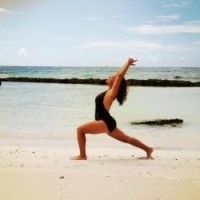 Jessica is trying to live in the moment, learn about life and be a good person. … Read full bio