The Sexiest Quality In Anyone. (Hint: It’s Not Confidence.) 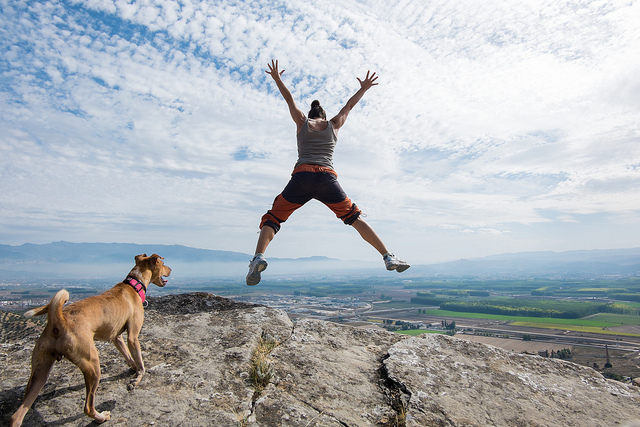 Confidence is sexy, no doubt about it. Someone who knows how to do something well and owns that ability, that’s damn sexy alright. But there’s another related quality that I find even more appealing.

Before we get to the biggest turn-on trait, let’s remember that quiet confidence ought not to be confused with outright arrogance, which is based in insecurity.

When someone feels the need to boast, they actually lack confidence and subconsciously need to fill that gap in themselves with others’ validation. (Been there, dumb that, grew out of it—mostly—and got the t-shirt.)

Aside from confidence, there’s another quality that spells admiration-worthy from where I stand, sit or sprawl…

The quality I admire most in anyone is courage.

We are all afraid of something. Some of us are afraid of many things, and some fear damn near everything. I have a friend who says “I’m scared” or “That’s scary” so many times in any given conversation that I’ve joked about penalizing him for using the word.

I used to be a scaredy-chicken. I was morbidly shy as a child and didn’t participate in recreational activities, sports, music lessons, dance class, group activities, or anything social-oriented—and to me, social-oriented meant more than me and one close friend.

As a teenager, I turned to liquid courage (read: alcohol) to erect a semblance of a social life. I was still scared most of the time. (And intoxicated when I wasn’t.) I admired schoolmates that participated when required and that even volunteered to join activities. I was not a joiner.

A popular classmate, Vicky, was into every sport and social program imaginable and was often the team captain. She had the cutest dimples and a killer volleyball spike. She seemed fearless. I remember her infectious laugh and my wanting to be like her. To be her.

As an adult, I developed a measure of courage (and confidence) in work, but clung to that old timidity despite my success, plus some heavy-duty-ego-based arrogance. (My shy-based insecurities needed that at the time.)

When I walked away at the top of my career to pursue my passion—you’re reading it—I was terrified. I feared criticism and ridicule (from my previous associates and potential readers of my new endeavour). I did it anyway, and inasmuch as I was questioned and made fun of by my fear-driven old-world brethren, I’ve had a hundred-fold more positive feedback. Not that I need the validation, but maybe I do. It doesn’t matter.

I was courageous. And courage inspires because we are all afraid.

We’re afraid to go for the new job when we’ve hung our hat at this one for so many years. Or to audition for the play with our local theatre club. Or to finally talk with that woman on the boardwalk we usually just smile at. Or take swimming lessons when we’re 75. Or cry in front of our partner or the world…or travel half way around the world when we’re 40 and have never left our homeland.

Or to tell our sweetheart we love them when we’re unsure they feel the same.

Or to ask for forgiveness and admit we feel shame.

Or to love our flawed selves and let go of blame.

Now, when I converse with people who talk about and live by their fears, I want to shake them and yell, “Wake up! Live, for Cristo’s sake!”

But I remind myself that they’re on their own journey and the fears they feel are real and valid to them, as are the fears I hang on to and the ones I’ve overcome.

Most people with confidence in something didn’t start with the accompanying skill. Whether it’s learning to rally the V-ball or making big-business decisions based on numbers and statistics and logistics and supposed-sure-thing strategies. Either way, it takes guts to go for it; to put ourselves out there subject to “failure.”

Having the courage to try leads to confidence, because it doesn’t matter if we get good at the thing we tried, it’s the trying that matters.

But what will they think of me?  This was the most annoying fear to me, the one I was most crippled with.

I thought it was only me, but I looked around—TV, magazines, movies, commercials, commercialism—and realized we live in a what-will-they-think-of-me society.

When we become really, truly cool with ourselves, we need a lot less what-will-they-think-of-me stuff, but as ever-evolving, stimulation-requiring, supposed-intelligent beings we find other ways to worry about opinions.

How many likes did my Facebook status get? How many retweets? Am I being judged for how advanced/basic my yoga practice is? How acclaimed is my kid in school? The list goes on.

So, yeah, when someone walks to the beat of their own drum, I. Love. Them. It takes courage to stand out from the crowd. It’s okay not to as well, if that’s our authentic self.

And courage doesn’t equal irresponsibility. Sometimes, the greatest courage a person faces is committing to taking responsibility for something greater than themselves, like family and children. But that’s also not an excuse to hide behind when it’s really fear holding us back from doing those heart-happy things (while still being accountable).

Overcoming fears doesn’t mean doing anything overtly dangerous or simply stupid. It doesn’t have to mean jumping out of an airplane at 14,500 feet. (Though it can if that’s what does it for us!)

I commit to taking chances and not worrying about what anyone else thinks. Or at least, caring less. I commit to trusting my path, whether I “fail” or “succeed” and that Life will catch me should my wings falter. Life really does begin outside our comfort zones.

This isn’t a dress rehearsal, it’s a one shot deal, so sign up for those guitar lessons you’ve always wanted to learn or take a Spanish class or audition to sing in the choir or act in a play or join a club or take night classes to finally get that degree or apply for a loan for that start-up business. Or ask that special someone out. Or come out of the closet. Or stand up for something. Or speak out for someone. Or write and publish that damn memoir bubbling inside.

What’s the worst that could happen? Whatever it is, it’s worth it. (Refer back to being safe and responsible, but still, as the saying goes: where there is a will…)

Failure isn’t in not succeeding. Failure is in not trying.

Because here’s the thing: if “they’re” talking about us, then we’re important enough to be talked about. And even though that’s an ego-based consolation prize, it may be enough to let go of fear long enough to impress ourselves by going for it—whatever “it” is!

I hummed and hawed and fretted and feared about publishing my memoir. I was scared to have it out in the world to be judged and criticized and misunderstood. I did it anyway.

And it doesn’t matter if it’s wonderful or wan or successful or forgotten, because I tried. And that makes me a damn sexy woman.

We are all afraid of something. That’s why, in my world, when we look at fear with determined ferocity, I think—

The Secrets of Truly Sexy People

How mindfulness can help us be the kind of person we want to be: