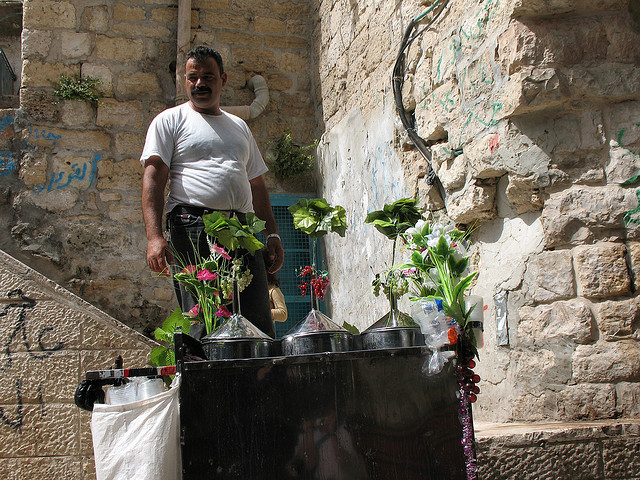 The guy is big and tough looking—just at that age when young men are most prone to beating the crap out of people they do not know, and he is standing there with two grumpy looking friends.

Palestine has felt remarkably safe but one does not want to try their luck. It is late, getting dark, the neighborhood here in Bethlehem is starting to look a little rough and someone has just told me to be careful.

I try to avoid eye contact for the most part, but as they walk by, I nod a gentle smile and the big guy asks, “Where are you from?”

I say “America,” but I might as well say, “the country whose media has made you look like a terrorist and diminished your life prospects through tacit support for the Israeli occupation.”

Not a moment passes before he sticks out his hand and there are smiles all around. In that warm and welcoming tone of Mr. Rourke from Fantasy Island, he says, “Welcome, welcome to Bethlehem,” and everyone shakes my hand.

The word Palestinian has been criminalized in the minds of most Americans.

It is often associated with irrationality and terrorism.

Palestinians in the West Bank have been under Israeli occupation for almost 50 years. They have been ruled by military decree, and their lands have slowly been confiscated and colonized. Their resistance to this occupation has been largely suppressed through a series of decrees that make normal life impossible.

Their movement is stifled by checkpoints.

Houses are often demolished for political activity. Their relationships are broken by informers to whom Israeli authorities promise the rewards of freedom. Water to a community is often shut off due to the actions of one of its members. And peaceful protesters are often shot. So, their resistance tends to be driven underground, and the whole culture takes on the appearance of criminality.

But everywhere in the West Bank I am being met with hard exteriors and warm interiors.

The closer you get, the warmer the welcome.

Everyone gives me coffee and sweets, extra food and discounts on rooms. It is often confusing as to which gifts are free and which come with an expectation of reciprocity. But even in those cases of expectation, the friendship feels real, and the willingness to take the time to show me around feels less like some political duty and more like an ingrained sense of kindness.

So, as I shake hands and bask in the warm glow of welcoming, it is a familiar feeling. And the embrace I feel is returned to an entire culture that is vastly more beautiful than anything I had expected upon arrival.

Reporters in the West seem to miss the kindness that is everywhere here for several reasons. Reporters are often a little shallow, they tend to stay in five-star hotels, and they usually cover political drama, not day-to-day life. They also come with their own prejudices, ingrained through focusing only on the violence, and they must speak to the prejudices of their Western audiences, where the medium of television does not do a good job of portraying gentleness and subtlety.

As they focus on writing about the violence, they come to see more of it.

Meanwhile, audiences in the West tend to see only the worst parts of Arab culture and then turn their ephemeral ideas into concrete facts in their minds. Then they string together misplaced verses from the Qur’an, pieces of pro-Israeli propaganda, and thousands of years of Christian enculturation, into some vision of a clash of civilizations.

The sense of honor is strong here, make no mistake. And it accounts for the strength of Palestinian resistance. You can dishonor a man by looking the wrong way at his wife, by injuring a member of his tribe, and perhaps most importantly for Israel, by stealing his land.

When you cross these lines of honor, I am told and can easily infer, that the aggression can be intense. So, it is a largely passive and warm culture with the capacity for aggression should the kindness be taken advantage of and the people dishonored. If there is to be peace in the Middle East, this is vital cultural information that has all too often been ignored.

It is easy to miss the deeper currents of a culture and to lose ourselves in the hall of mirrors of media stereotypes.

In the process, we come to struggle with our own illusions. We miss the thousand little disagreements amongst Palestinians, which if we would only listen might signal a space for dialogue. And we miss the open arms with which we might be greeted if only we would share in the sharing.

So many Palestinians want to open their homes and also touch something of that ever tarnished but still shining American magic. When we fail to take up the offer, we lose something of our own humanity in the process, failing to grasp the way human goodness is manifested through a thousand quiet channels.

As the bombing of Gaza continues unabated, and as the death count of Palestinians has already climbed into the hundreds and Hamas rockets fired into Israel miss their targets, fail to explode, and kill no one in return, it is important to remember what is lost when we fail to see the dignity of Palestinians.

They will resist in whatever way they can, Israel will be less secure, and America will be continually drawn into the Middle East.

A warm handshake and a smile might not stop a needless war and end the occupation, but it is a start to making peace and forging the kind of security that will allow us all to see more deeply into one another’s hearts.