Whenever I experience another teacher’s spin on yoga, whether through how they formulate the physical practice or how they express themselves before we get moving, I always appreciate and ponder something they said or did.

If they are passionate and poignant, there is always something I take away, always a lesson learned. There’s a moment in the conversation with the body or mind that really sticks with me, something that creates a shift in me, motivates me to move a little differently, to speak.

On the Wanderlust circuit all the teachers are passionate. This passion is why they are there. It’s why they rise to the top of an ever expanding field of yoga instructors.

Lately, for me at least, the physical practice is something more easily grasped (I’ve been doing asana for over 15 years). The patterns of the mind and lifestyle are a bit more of a challenge. The way we (teachers) piece together and move through our postures can be expressed in a multitude of ways. The message behind the movements seems to carry more and more weight.

Lately there has been a collection of teachers that have initiated their practices with this “Yoga doesn’t Care” thing. It goes something like this:

Yoga doesn’t care who you are…

Yoga doesn’t care who you love…

Yoga doesn’t care what you eat…

Yoga doesn’t care if you have a perfect posture…

Blah blah blah… you get it.

Honestly, I can absolutely get on board with a lot of what they are saying, but I would have to disagree that “Yoga doesn’t care” about anything. From my perspective, yoga is not a religion nor does it hold any dogma.
Yoga is a system of wellness, a process in which we become healthier—physically, emotionally, spiritually.

“Yoga “ with a capital Y can also be considered a witness to this process, our ever present yoga buddy that offers silent support as we walk the walk. I agree that yoga does not judge, but, it is a witness capable of reaction—kind of like a dog.

There are always many dogs around at Wanderlust, following their two-legged parents to class and hanging around the marketplace, making new friends. We have three dogs at home, and having them has always been a lesson in patience, consistency and unconditional love.

This parallel between “Yoga” and dogs came to me while attending the practice of a charismatic male yoga teacher. He began his Dharma talk with this “Yoga doesn’t care” thing. I witnessed many heads nodding in agreement as he went down the long list of what “Yoga doesn’t care” about.

I couldn’t help but think, “If I was Yoga, I would care about something!”

Then I thought of my dogs. Dogs don’t judge, but dogs do react. Maybe this is a better model of this “Yoga as witness” thing. I will agree that “Yoga” shouldn’t care about the color of our skin, our sex, our sexual preferences, religious choices, things of this sort. However, I do feel that “Yoga” should care if we say…beat our kids.

Let’s relate this to the dog. We come home and we could walk in with green skin, three noses, eight arms and the dog will still love the crap out of us, be excited to see us.

Same scenario: we come home, green, three noses, eight arms, and walk in and yell and curse and physically hurt someone in front of him, the dog will tuck his tail, and run away scared. I wouldn’t say the dog was “judging” us per se, but the dog definitely cares.

This violent behavior shows the dog a piece of your deeper nature and drives, and the dog doesn’t like it. I think “Yoga” is like this. The violence may not be directed at the dog or during your “practice,” but the recipient of that violence will definitely care.

The actions that stem from these things matter. “Yoga” should care about that.

Many of these “Yoga doesn’t care” speeches always include, “Yoga doesn’t care what you eat.” It never fails. Also a favorite is, “Yoga doesn’t care who you sleep with.” Being a vegan woman, I respectfully disagree with both of those comments. As far as I’m concerned, if our actions (whatever they may be) cause another living thing harm, whether physical or emotional, there should be some caring involved.

If you are that person with green skin, three noses and eight arms and like to have group sex with consenting adults while eating deep fried vegetables encased in jello—go for it, enjoy. No judgements here. On the other hand if you eat animals and have sex with those who do not, or cannot consent, someone cares—the animals that die care, the victims of sexual violence care.

When the choices we make hurt others, others care.

These things should be cared about. We are, after all, practicing to become better people, right? If we are working towards enlightenment, I believe enlightened beings care about stuff.

There is a lot of Yogaspeak going on out there and we need to really ask ourselves these important questions:

Do these words inspire me to be better? Do better? Or do they just give me an excuse to keep on keeping on despite any consequences to others?

Whoever or whatever “Yoga” is may not care about the choices we make, but trust me yoga people—out there, somewhere, there are living things that deeply care about every single one. 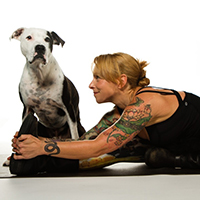