Kids Will Figure It Out For Themselves. 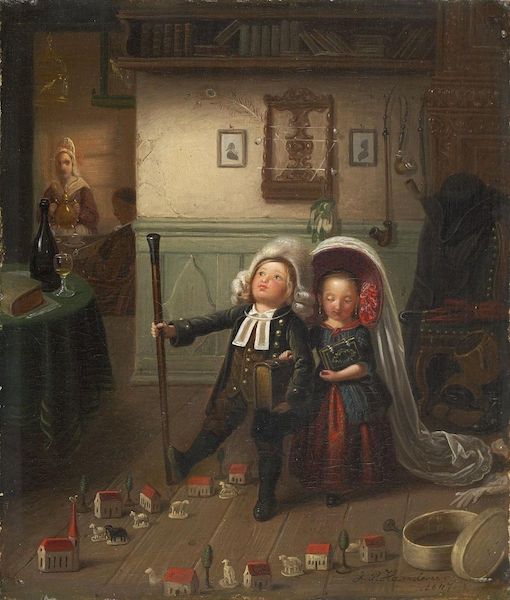 Lately, I’ve been noticing how my almost-five-year-old, Opal, and her friends are sorting out some difficult relationship stuff on their own, without the need for grown-up interference. And they often do it with a palpable level of grace and warmth. Adults take note.

Recently, Opal and her best friend, Sabine, had a little tiff.

It went like this: They had had a wonderful morning at gym camp and were in a blissful, albeit manic, state when I dropped Sabine back off at her house. We went in for a minute, one minute, because I am all too aware that happy mania is a stone’s throw from angry mania. (Audibly, the two often require the well-honed ear of an ornithologist to detect a difference in pitch from afar.)

The girls were giggling and hollering, trotting about like puppies, when Opal said something—I didn’t hear what it was—and Sabine’s face turned dark, heavy, and she ran into her room and closed the door.

Opal went to go check on her and they closed the door behind them. “One more minute, honey,” I said through the door, and exchanged a knowing glance with Sabine’s mom. Things often get a bit tangled for these two at the end of a glorious playdate. Perhaps it’s exhaustion, perhaps wanting to have more control of the completion of things.

But this time, Opal promptly emerged, sooner than we’d expected. Weirdly, no fuss. She had a big smile and something behind her back. “All ready to go,” she said.

Sabine came out next. Whatever prompted the scuffle was totally mended and forgotten. Her expression was replaced with the glow of someone who had been generous, made an offering. The specific place in one’s heart reserved for calling a truce.

She had given Opal a couple of toys—palpable, if fleeting, symbols of her forgiveness.

Adults typically handle getting our feelings hurt in a different manner. And it is these little miscommunications, cumulatively, that can cause a relationship to go astray. The big blow-ups are not as dangerous, in my opinion, because they are harder to ignore. But the tiny hurts can so easily be overlooked, and thus burrow into one’s heart like tiny parasites.

Kids don’t have that option. At least at Opal’s age, holding in one’s feelings is about as impossible as holding one’s breath.

On our way home, Opal considered her new toys with a level of wonder that far surpassed how she handles her store-bought trinkets.

“Mommy, why did Sabine give me these toys?”

“She wanted to give you a gift. And I think she wanted to make things okay. It was kind, wasn’t it?”

“Yes. I want to give her something, too.”

Two days later, we were set to pick up Sabine again for gym camp. Before we left, Opal disappeared into her room, door closed, to look for something of hers to give to Sabine. I stupidly fished out a few small, cute dolls as a suggestion. But I set them down on the table, unseen,  when I saw her expression as she emerged from her room.

“Look, Mom!” She held up a necklace to the light, as if observing the pocks and rutilations in a string of fine gemstones. It was a half-dozen rainbow-wooden beads strung on some clear, stretchy craft string. “She will love this,” she said.

For the entire drive to Sabine’s house—10 minutes or so—the focus was on the necklace. She was half-talking to me, half to herself.

“Do you think she will like it? Yes, of course she will, she loves jewelry. She has a whole bit of jewelry with her dress-up stuff, you know.” {Sigh. Drink of water.} “What if it doesn’t fit her?“

As we were pulling up to Sabine’s house, Opal put the necklace in the drink-holder in the booster Sabine would be sitting in, so it would be there for a surprise. We ran up to the door and Sabine opened it, juggling her water bottle and a snack bag and about to take a step down, when Opal procured the necklace, unable to stifle her excitement. She must have had second thoughts about the cup holder idea and put it in her pocket instead.

“Here Sabine! I brought you this necklace I made!”

Oh god. Nothing can spoil the most thought-out, intentional act of kindness like a crappy delivery. Opal put such heart into this gesture-to-reciprocate-a-previous-gesture and I felt her eagerness to be acknowledged for that. So, again dumbly, I stammered, “Let’s let Sabine get out the door, then—“

Sabine took the necklace, said, “Thanks!” then pulled it directly over her head, ignoring the hair-pulling and tightness, if not for the stretch of the string. In an instant, Sabine seemed to understand the goings-on far better than my own cluttered, grown-up mind was able to. Opal beamed.

I wanted to kiss Sabine smack-on-the-cheek for honoring Opal’s gift in this perfectly swift, clean gesture. But of course, I didn’t. Because this moment was theirs.

A few minutes later, both of them were in the backseat, rustling to get settled into their boosters.

Then Opal said, “Aren’t you glad I gave you that necklace?”

Sabine said, “Yes. I am. Aren’t you glad I gave you those toys?” Opal had the mini My Little Pony, along with a tiny plastic bear, the truce-gifts from Sabine, in her drink holder.

“Yes,” Opal said, picking them up.

And for a stretch of scenic highway—cows on one side with their mouths to the ground, building blocks of hay on the other side—there was quiet. A stealthy glance in the rearview mirror offered me this image: two girls gazing out their respective windows wearing subtle, satisfied smiles. Equanimity.