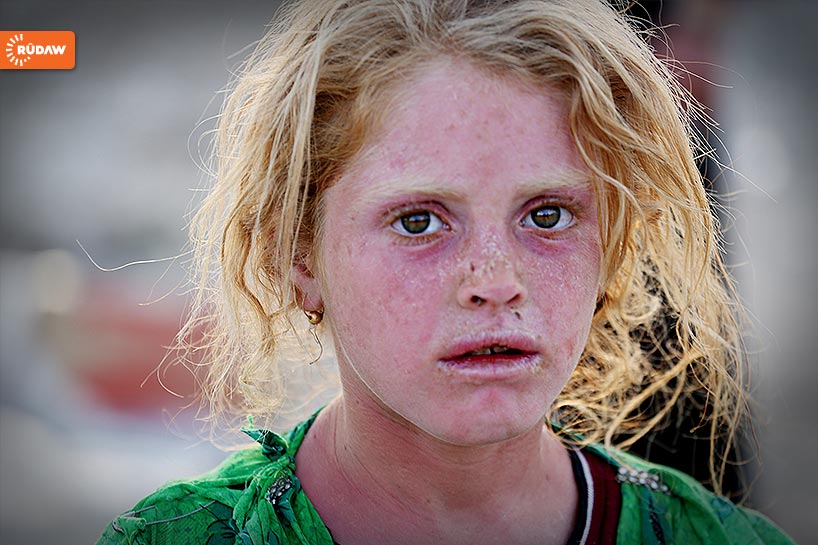 There is always the worry when wandering too far off the beaten path that you might be beaten and robbed, and no one will care because you are not one of them.

Just after telling me that only a few tourists pass this way each year, my Kurdish friend and guide left me at this small border town on the Turkish side of Iraq.

Now my life is entrusted to a taxi driver, who does not speak a word of English, who is to pick me up at the café where I wait for a couple of hours, to take me to the airport. But the café is an oasis of rolling Central Asian melodies and cool watery mists. And it is a refuge from the stony streets, where Kurdish youths stop and stare.

We came here to visit the Yazidi refugees, streaming in from northern Iraq. It took a friend of a friend of a friend to reach my new friend Murat, at four degrees of separation. I might as well have met him in an artsy coffee shop, in a liberal American college town.

He is a photographer from a nearby city, and the camp guards seem not to trust these two long-haired men, with no press credentials and no clear plans. But if you want to understand the fate awaiting the Yazidis, you need to understand where they have come from and where they have landed. And this means you must take the time to feel your way into the crosscurrents into which they have been thrown.

This camp is run by the local PKK, a Kurdish group that used to be a communist but appears to have mellowed. It was the PKK that cleared a path out of the mountains for many of the Yazidis, who were trapped there and dying of thirst.

But many in the camp worry the PKK only saved them so that they could enlist the young men to fight against Bashar al-Assad in Syria. Yet the PKK is a highly progressive force in Kurdish society, which is pressing for the equality of women. And they are now making peace with the Turkish government.

The man in charge moves with the graceful fluidity of a liberal and broad minded thinker. And he complains to my Kurdish friend that America still lists the PKK as a terrorist organization, though they do not engage in terrorism and are now fighting with America against the Islamic State in Iraq and Syria.

Still, he tells us we can enter the camp, saying that he can see we are humanists.

The Yazidis I spoke with do not trust any other group in the Middle East. They say they have suffered 74 genocides since ancient times.

And while it is hard to tell exactly what this means, it is clear they feel persecuted.

They remind me of many of my Jewish relatives, who migrated from Iraq to Iran shortly after the First World War. My father said he never really fit in until he came to America. And like my father, the Yazidis say they want to leave the Middle East and come to America. My friend and translator, Sivan, goes so far as to say that Yazidis only trust God, the U.N., and the U.S.. But he says that he only trusts the U.S. After all, the recent intervention just saved them from genocide.

The Yazidis call themselves a minority of the minority Kurds. Their religion precedes Islam to which other Kurds converted shortly after it began. Yet, the Yazidis held firm to their faith, whose roots lie in Zoroastrianism.

They say their religion respects all other faiths, but many in the camp reject religion altogether. The Islamic State in Iraq and Syria call them atheists and threaten to kill them if they do not convert. But the Yazidis are a remnant of a remnant, and resisting assimilation appears to be part of their cultural DNA.

So, now they are targeted for genocide.

Sivan and I sit and philosophize with a group of young men about the nature of genocide, of religion, and of a life disrupted. The conversation is discontinuous as some drift off, wondering about family that have been left behind. Traumas like these can narrow the scope of life, and yet it is important when everything has been thrown into question to get some distance and explore the options.

There is something exotic about such a small and ancient sect, but these young men are like the Millennial Generation everywhere.

They have the same hair cuts, the same phones, the same education, the same soft manners, and the same addiction to Facebook. Their eyes are bright and their faces smart. Even here in the camp, they seem at home in the world and comfortable with diversity. And yet, they are survivors of a genocide and their fate hangs as if by a geopolitical thread.

But as for now the world is closing in on him, and it is clear his life just got a lot harder. There will be tough choices ahead over which no one should have to struggle.

We can help by understanding who these people are and what they need.

Now that America has taken it upon itself to protect the Yazidis, we need to understand the geopolitical context into which they have been thrust. And we need to imagine their lives as if they were our own.

It is imperative that we understand them enough to not just save their lives but to allow them to flourish. And this means that after we have absorbed the horror stories of genocide, we need to open up a window into their worlds so that they might find a way out.