My Worst Heartbreak Ever (& How I Finally Let Him Go). 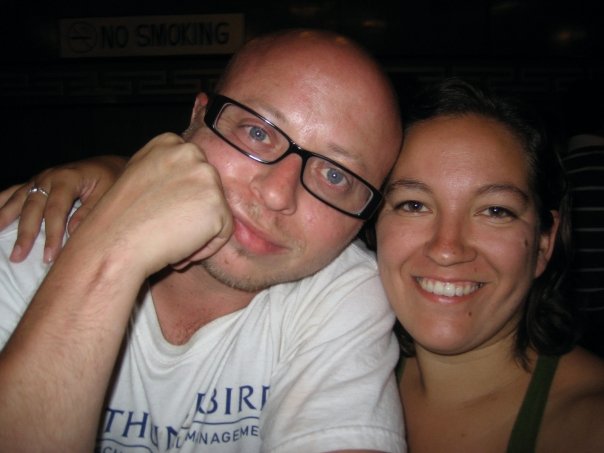 In the beginning, there was Adam and me.

He lit up the room with his bright smile and inimitable wit. We were college classmates, creative collaborators, acquaintances, then friends, then good friends, then lovers, then nothing.

The nothing was perhaps the worst heartbreak of my life.

Because I was young and relatively innocent and relatively stupid. But most of all because I let a handful of disappointing yet meaningful-to-me-meaningless-to-him shags utterly destroy a cherished friendship.

Adam, on the outside, was short, stout, blue-eyed and curly-brown-haired, hilarious, Jewish. We met because we’d both been accepted into an elite creative advertising program at the University, though he was a year older than me.

He was the funniest person I’d ever encountered in real life.

I was intimidated by his easy sense of humor, his seamless way of cracking one-liners and making the whole class, including the stodgy old professor, burst into laughter. I was shocked when we somehow decided to partner up on our first mock ad campaign, he as the art director, me the copywriter.

For a solid year, we were friends. Nothing but friends. Drinking buddies. Cohorts. But Adam had a million friends, of both genders. I was quite the social butterfly myself, a sarcastic, flirty, bendy, confident, and fun 21 year old.

He was my height, and I am short! He drank too much and was unromantic. He was not my type, yet I fell and felt myself falling, and I’m pretty sure I even told him I loved him once or at least wrote it on a piece of paper and gave it to him like a sixth grader.

He told me sincerely that he was flattered but that he was in love with another woman. My unseen competition vanished soon enough, and then he was all mine. Except not. We were never “together.” We never dated. We hung out, platonically, for a year, then sexually for a couple of months. He never said he loved me.

On the inside, under his clothes, Adam was shockingly well endowed. Being an inexperienced (though not virginal) college girl at the time, I thought size mattered. (Okay, so it does! But foreplay matters more. A lot more.)

On the inside, under his skin, Adam was unreadable.

I can only guess that he was, like me, tormented by depression and anxiety because of the random bottles of prescription meds he left carelessly strewn about his filthy West Campus apartment in a rundown building that surely should have been condemned.

After sex, he would become utterly distant. There was no cuddling to be had, when that might have been all I’d really wanted in the first place. And yet, I kept coming back for more loveless lovemaking.

His graduation approached, and he applied for an English-teaching gig in Japan. He withdrew. I wrote him ridiculous, heartbroken emails, begging him to allow me to be his friend, desperate to salvage our once-sturdy friendship and erase all the inane emotions the sex had unearthed. He would have none of it.

Adam left the city, the country and the hemisphere without so much as a hug goodbye.

About five years later, after I’d moved to California and back, after I’d had a nervous breakdown and recovered, we got back in loose touch, surely initiated by yours truly. He happened to be living in Houston, and I happened to be going there for the weekend.

I stayed at his place one night, and though it was a posh downtown loft, it was still dirty and cluttered. Good ol’ Adam. We did the deed like clockwork, and it was altogether regrettable. I left the next morning feeling lame and pathetic, and that was the end of the ludicrous saga between Adam and me.

A few years later, I was walking by myself through a small village called Vashisht in northern India. I’d been traveling there, alone yet almost constantly accompanied by serendipitously-encountered travel buddies, for weeks. It was a humid midsummer day, and I was feeling tired and a little out of sorts. As raindrops began to fall lightly, I lifted my gaze and saw a familiar figure standing in the doorway of a shop. His curly hair was gone, replaced by a bulbous shaved head, but it was unmistakably Adam.

I walked right up to him and said, “No way this is happening.”

But it was, and it did. I had run into my first love in the foothills of the Himalayas. Turns out he’d been doing an internship for his MBA in south India and was then finished and traveling a bit before returning stateside.

Thus, we two Texans strode back to Manali, a larger town a few kilometers away and sat in a Chinese restaurant eating Tibetan momos and nursing huge bottles of Australian beer. It was a lovely afternoon.

I was to catch an overnight to Dharamsala a few hours later. Adam was headed in an opposite direction, to a city in which I had no interest. The thought of changing my itinerary, or at least spending an hour in his hotel room for an international romp, flashed in my mind, but, thanks to my hard-earned maturity, I immediately realized that both ideas were bad before I had the chance to jokingly suggest either. It went without saying that Adam would not have changed his plans for me.

We hugged goodbye and parted ways. I felt happy and strong and content to be on my own. I could finally let him go.